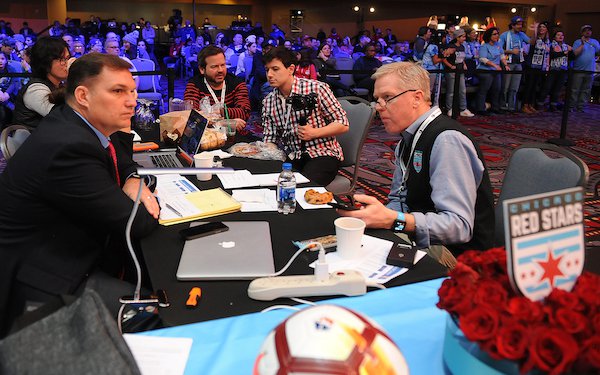 On Tuesday, Chicago Red Stars majority owner Arnim Whisler announced he was handing over operational control of the NWSL club to their executive team and removing himself from a governance role within the NWSL board of governors.

A day later, the fallout from the Yates Report continued when the Red Stars board of directors issued a statement that Whisler has been removed from his position as board chairman:

“The Board of Directors of the Chicago Red Stars voted this morning to remove Arnim Whisler as Chairman of the Board, to transition him out of his board seat immediately with the Chicago Red Stars (Chicago Women's Soccer Academy, LLC) and to codify his removal from any further participation with either club or board operations. The Board was deeply disappointed after reading the Yates report and believes the club cannot move forward in rebuilding trust with players, staff and the Red Stars community with his continued involvement. Job one for board members is to continue building a culture where players, and all who work at the club, feel that they are in a safe and supportive environment. Lastly, the board wants to extend its gratitude for all who displayed such bravery in sharing their stories. Thank you for coming forward.”

In an email to the Chicago Sun-Times, the Red Stars added:

“The board wants to help facilitate a sale of Arnim’s shares in a timely process which is both prudent and when complete can lead Red Stars players, coaches and front office staff to a better future."

The board is comprised of Dean Egerter (part of the original group of investors who founded the Chicago Red Stars in 2007), Abel Lezcano, Colleen Mares (Advisory Board Co-Chair), Kim Vender Moffat, Brian Walsh and Kevin Willer.

The Red Stars began in WPS but left before the league's third and final season in 2011. Whistler then took over ownership control of the Red Stars, who played in the WPSL (2011) and WPSL Elite (2012) before joining the NWSL as one of eight founding members in 2013. In March 2021, the Red Stars announced a new group of investors, though Whisler remained the majority owner.

The Yates Report detailed abuse by Rory Dames, who coached the Red Stars from 2011 -- predating the NWSL -- until November 2021. He resigned 36 hours after the NWSL championship game in which the Red Stars lost to the Washington Spirit. Hours later, the Washington Post published a report about Dames, who was accused of emotionally abusing Red Stars players and creating a toxic environment on the team.

Players on Dames' elite girls club Eclipse Select told Yates investigators he created a "sexualized team environment." In 2014, U.S. national team star Christen Press told U.S. Soccer officials about Dames' behavior in creating a hostile environment. According to the Yates Report, Whisler's response was to accuse national team players, among other things, of having an “axe to grind” with Dames and he "refused to accept" Dames' offer to resign.

Complaints continued about Dames over his nine NWSL seasons with the Red Stars. A 2018 investigation substantiated many of the players’ "core complaints" about the coach and his "cycle of emotional abuse." When then-Red Stars player Samantha Johnson spoke that year with NWSL general counsel Lisa Levine about Dames' behavior, Whisler accused Johnson of “trying to take Rory out.” In 2021, the Red Stars had a sports psychologist issue a report on their team environment. It concluded Dames had created a "culture of fear."