Sevilla collapse: 'Sadness and pain' after Julen Lopetegui is fired 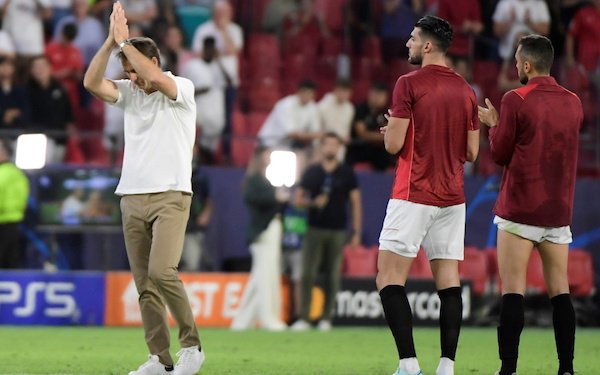 Julen Lopetegui said he felt "sadness and pain" after being fired as coach of Sevilla following a 4-1 home thrashing by Borussia Dortmund in the Champions League on Wednesday.

Some fans applauded Lopetegui at the Ramon Sanchez-Pizjuan and directed their anger at the board, with the club sinking to 17th in La Liga after a dire run of form.

Jorge Sampaoli, who coached Sevilla in the 2016-17 season, has agreed to take the reins,according to reports in Spain.

"Lopetegui ends a successful era, with three magnificent campaigns in which the team accomplished all their objectives with flying colors, and a fourth season in which results did not come, with Sevilla on five points of a possible 21 in La Liga," read Sevilla's statement. "Lopetegui will stay forever in the top-tier of Sevilla's history for the brilliant triumph of the club's sixth Europa League in the 2019-20 season."

The coach confirmed his departure on Spanish television shortly before the club announced it.

"I am grateful to the whole of Sevilla, their fans, the players who have given me three marvelous seasons," Lopetegui told Movistar. "(I feel) sadness and pain for leaving a team that I love very much and which will, without a doubt, stay in my heart."

Sevilla sold Lopetegui's defensive core in the summer, with Jules Kounde moving to Barcelona and Aston Villa buying Diego Carlos, while winger Lucas Ocampos moved to Ajax on loan as the club looked to cut costs.
The former Spain and Real Madrid coach arrived in June 2019 and took the Andalusian team to a record sixth Europa League title in his first season.

However, after three consecutive fourth-place finishes under Lopetegui, the team has gone nine games without a win in all competitions.

It beat Cadiz on the opening day but that remains its only victory of the season. A 2-0 home defeat by Atletico Madrid on Oct. 1 all but sealed Lopetegui's fate, which was confirmed after the destruction by Dortmund.

It is the first time Sevilla has lost four consecutive games at home since 2002, but supporters still chanted Lopetegui's name and he showed his gratitude for their support.

Sampaoli earned a fourth-place finish in his one season at the helm of Sevilla but departed to take charge of the Argentine national team in 2017, leading it into the 2018 Russia World Cup.

The 62-year-old has also coached the Chilean national team, winning the 2015 Copa America, and French side Marseille in Ligue 1, whom he left in July, among other clubs.

In Wednesday's game, English teenager Jude Bellingham played a starring role by being named Dortmund captain and scoring. The 19-year-old scored for a third consecutive Champions League game as the German team stayed second in Group G with six points.

Manchester City leads the way with a perfect nine points from three games after a 5-0 rout of FC Copenhagen.

Bellingham played a key role in the opening goal after just six minutes when his superb pass found Raphael Guerreiro to sprint away and score.

Bellingham made it 2-0 in the 41st minute after easing past Nemanja Gudelj and then slotting the ball into the far corner.

It was 3-0 just two minutes later with Karim Adeyemi finding the net from close range.

Youssef En-Nesyri headed in a consolation goal after 51 minutes for his first goal of the season.

But any hope of a comeback was dashed when Julian Brandt headed home in the 75th minute.