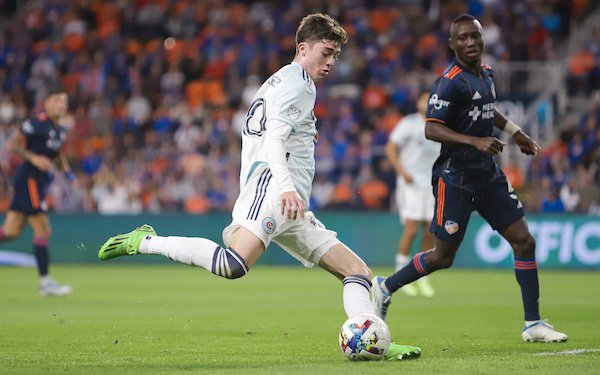 For the Chicago Fire, the 2022 season will end on Sunday when it hosts the New England Revolution. Decision Day will not have any real intrigue for this game as both teams have been eliminated from qualifying for the playoffs and the game is being played at the Fire’s former stadium in Bridgeview due to a conflict with the Chicago Bears to use Soldier Field.

Brian Gutierrez, 19, has been one of the Fire’s key young players and the homegrown has been surging in recent months to end the season. Last week, dealt FC Cincinnati a tough blow to its playoff hopes with a one goal, two assists outing in a big 3-2 win away in Ohio.

“I feel really great, and I feel like I am hitting my stride,” Gutierrez told Soccer America this week. “It's been quite a ride the past few months. I am fully confident and fully motivated. With the U-20's, it motivated me even more. It gave me a boost and it reflected on the field.”

Gutierrez is only part of Chicago’s emerging youth core. Jhon Duran, 18, is one of the best and most exciting teenagers in the league and was recently called up by Colombia’s national team in September, earning his first two caps in wins over Guatemala and Mexico.

Goalkeeper Gaga Slonina, 18, is wrapping up his final season with the Fire after securing a sale to Chelsea over the summer. Next year, Chris Brady, 18, is expected to contend for the starting goalkeeping position with Slonina gone.

“It's really fun and it's really exciting,” Gutierrez said. “I've known Gaga since I was 10 years old. So from there, we bonded together and we've grown throughout the years. I'm really excited to see him grow and take that next step to Chelsea. For Jhon, he's a really good player and he has a real talent. Seeing that throughout the year has really motivated me and motivates us. We click together on the field and that's what's best for the team.”

The Fire has an interesting mix of veterans and youth. Xherdan Shaqiri is one of the most recognizable Designated Players in the league and Gutierrez notes how he is very helpful in working with the team’s youngest players. The same can also be said for Paraguayan international Gastón Giménez and former United States World Cup defender Jonathan Bornstein.

“Obviously, being a young guy, you have to do more than the other guys to be on the field - like just grind it out, give it your all,” Gutierrez said. “That's what I've seen and that's what I've done. A big piece of my game that I've been working on is in transition phases - defense to attack, attack to defense. I think I've done a good job and progressed well with that.”

“There is a big group of young guys and older guys,” Gutierrez added. “On the field, they give us pieces of advice. You take that, you learn from it, you reflect and see what you can do. You learn from it and you grow from it. Shaqiri and Johnny Bornstein are also guys who have helped me and helped others - both with motivation and teaching us things on the field. Those are really good mentors for us.” 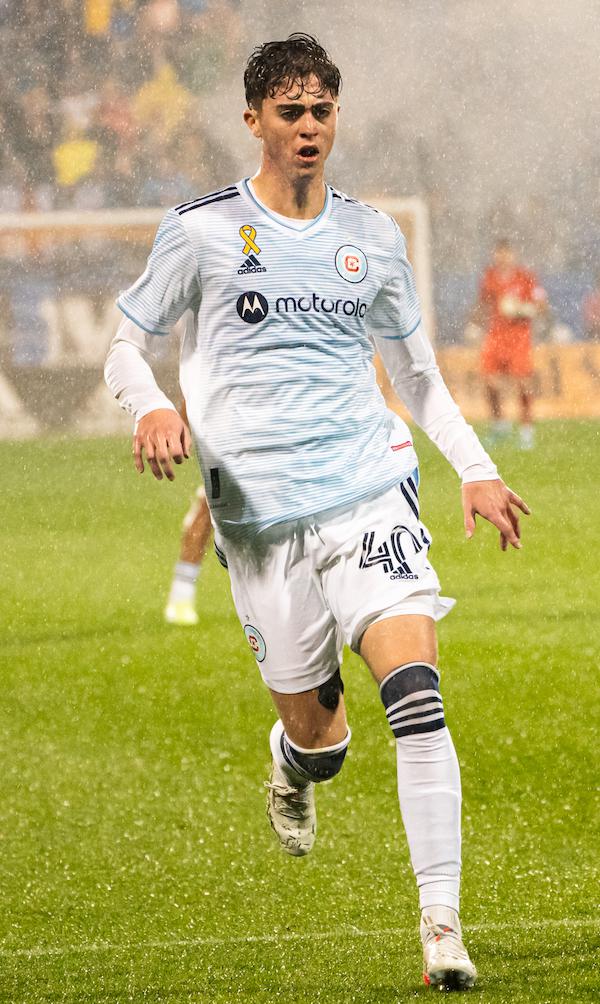 Chicago Fire head coach Ezra Hendrickson has been quick to cite the team’s belief in the emerging young core – but not just because of their individual talent, but also because of their chemistry. In the win over Cincinnati, Gutierrez assisted on the two goals from Duran.

“Well, they are both -- I've said this from the beginning, they both have very, very high ceilings,” Hendrickson said. “If we talk about Jhon, he is a player that, once he gets it all together, he can be a really, really special player. He has all the tools. Guti, as well, he's a very good player; his vision, his ability on the ball. He needs to get a little stronger on the ball and sometimes maybe see some things a little quicker. But the ceiling is very, very high for both of those guys, and you know, that's why they are playing.”

“Brian Gutierrez is someone that has big potential,” Hendrickson said earlier in the season. “His ceiling is very high, and he's nowhere close to hitting his ceiling right now and it's good to see the way he's improved and developed. He's just a good footballer.”

For most of the 2022 season, Gutierrez has been playing on the wing. It is a different role than the preferred No. 10 attacking midfield position he played in the Academy but adapting there has allowed him to play regularly under Hendrickson.

Hendrickson is not the only coach who rates Gutierrez. U.S. U-20 head coach Mikey Varas has Gutierrez firmly in his plans heading into 2023 when the USA will take part in the U-20 World Cup in Indonesia.

Gutierrez has been a regular with the U-20 team but, along with Slonina, was not released by Chicago for the Concacaf U-20 Championships in June. The U.S. team dominated in that tournament, defeating the Dominican Republic 6-0 in the final, and qualifying for the 2023 U-20 World Cup and the 2024 Olympics in the process.

Gutierrez was given permission last month to participate with the U.S. U-20 team at the 2022 Revelations Cup in Mexico City. The U.S team defeated Peru 3-1 in the opener, dropped a 2-1 decision to Mexico in the second game -- the U.S. team played very well in the loss -- and then defeated Paraguay 2-0 in the finale.

“We're really a team with a really close bond,” Gutierrez said of the recent Revelations Cup tournament. “We really have a great group of guys in the team, and we work really well with each other. We know the ideas and the style Mikey Varas wants from us. It showed on the field. We dominated most of the games, if not all the games. Even the Mexico game we basically dominated. We are a team that is always together. We're a strong team and a good team going into the World Cup.”

As the son of two parents who immigrated to the United States from Mexico, Gutierrez was born in the city of Berwyn, west of Chicago. He joined the Chicago Fire’s youth academy in 2015 when he was just 11 years old. He quickly emerged as one of the organization’s best young players and in 79 matches with the Fire’s academy matches, he notched 28 goals and 39 assists. In March 2020, the Fire made Gutierrez its 16th homegrown signing when he was just 16 years old.

For Gutierrez, 2022 has seen him take massively important strides in his career but this is just setting the stage for 2023 where the success-starved Fire will be hoping he can help fuel a playoff run and U.S. Soccer will hope he can be a big part of what looks to be a very promising U.S. U-20 World Cup team.

“The World Cup is where a lot of people see you and that’s where you want to perform at your best and at the highest level,” Gutierrez said about next year’s U-20 World Cup.  “It's good for me and for the team showing all of our qualities and what we can do on the field. And hopefully we will make a big run. I think we will make a big run because of the group that we have, the talent that we have, and how united we are.”