Can soccer back up the claim that its rules contribute to the safety and welfare of players? 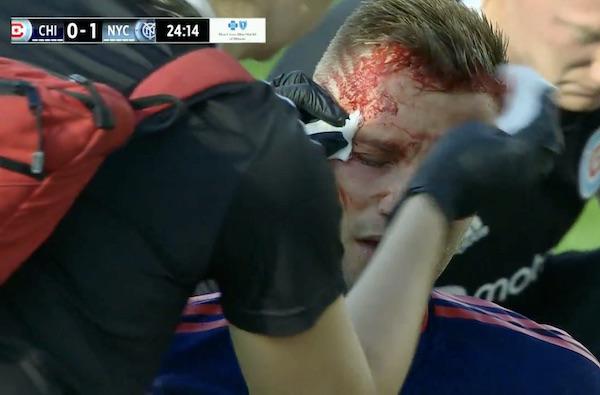 A couple of months back, on August 21, there was an “incident’ during the MLS game between the Chicago Fire and New York City FC. The sort of “incident” that is often quickly re-identified as an “accident,” and therefore nothing to get too excited about.

Chicago’s Kacper Przybyko and NYC’s Malte Amundsen jumped to head the ball, resulting in a nasty-looking head clash. Both players fell to the ground. Amundsen scrambled unsteadily to his feet, Przybyko stayed down.

There was a lot of blood — Przybyko's — to be seen, which dramatized matters, but maybe also falsified them. Scalp injuries bleed freely, but do not necessarily mean a serious concussion-inducing skull injury. Przybyko received intensive attention from the medics, evidently aimed at staunching the blood flow. Amundsen continued to move around, sometimes holding his head.

The game was held up for 3½ minutes. When it restarted, both players re-entered the field immediately, Przybyko with his head copiously bandaged. Amundsen went on to play the entire game, Przybyko was subbed off at 51st minute mark.

A similar “inci-acci-dent” occurred this past weekend in the English Premier League. Up went Newcastle’s Fabian Schar and Manchester United’s Bruno Fernandes, both seeking to head the ball. Another ugly head clash followed, both players fell to earth, both lying prone on the grass, with Fernandes holding his head, Schar repeatedly touching his.

Help arrived very quickly after both of these clashes. But what sort of help? The sight of these sharp, heavy, head collisions, plus the way that all four players involved immediately subsided to the ground told you that there was surely a concussion threat, and that therefore the “concussion protocol” would be applied to all the players.

But the speed with which all the players were attended to and rushed back into the game — 3½ minutes in the MLS game, 2 minutes in the English game — surely make it impossible for the protocol to have been administered. When the protocol first appeared on the soccer scene — in 2013 I think it was — I asked all sorts of knowledgeable soccer people how long it took to apply the protocol. I got a splendid array of differing answers, ranging from “about an hour” down to 12 minutes.

So, 12 minutes, that was the quickest protocol. No doubt, during the nine years since my informal survey, the medics have gotten better at using the protocol tests. But how likely is it that we now have a four-minute protocol — the maximum span that would be necessary if we’re to believe that the protocol was used in these two inci-acci-dents?

I, for one, do not believe the protocol was used at all. The facts are clearest in the case of Przybytko. His bloody head drew a lot of attention from the TV cameras, and they repeatedly showed a medic/physio leaning over Przybytko, her head very close to his, as she worked to stop the bleeding, and then to carefully wind into place the endless bandage. At no point was there space or time for the protocol tests and questions to be applied.

What the treatment of these head-clashes shows is that neither in MLS nor in the EPL is the concussion problem taken seriously. That will not be news to anyone who watches many games these days. It is rare to see the protocol employed, and

All matters dealing with soccer’s rules are the responsibility of IFAB (the International Football Association Board — or “The IFAB” as it now likes to be called). Given that IFAB is one of the least efficient bodies I have ever encountered in any activity, this is unfortunate.

I wouldn’t expect IFAB to agree with that assessment, but I do find it difficult to accept IFAB’s exalted assessment of its own worth. I have been discussing, with obvious — and recent — examples, the sport’s (and therefore IFAB’s) slapdash approach to the concussion protocol. Which makes a mockery of IFAB’s claim (p 11 of the current rulebook) that “The Laws must also contribute to the safety and welfare of players ...” Four pages further into the rulebook we have IFAB looking into the future “with a continued focus on player welfare.”

A quick aside on the subject of IFAB’s devotion to player welfare — a claim that would be much more convincing if IFAB’s own rulebook did not permit (in effect, encourage) goalkeepers to plunge head first at the feet of fast-moving opponents. You have to wonder what that barmy rule does for goalkeeper welfare. 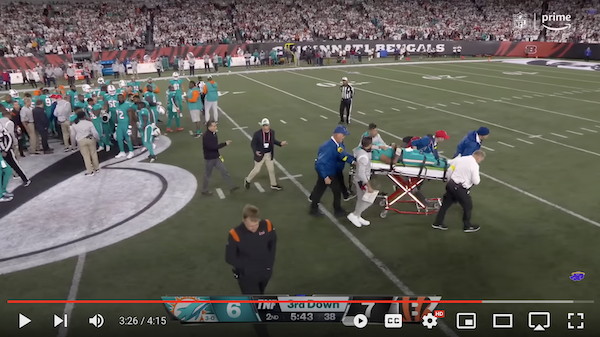 I have already accused IFAB of inefficiency. I think the area in which that failing is most obvious is the sluggish way that it responds when action is called for. Its reaction to the concussion crisis is typical in its slowness and lack of decisiveness. The crisis has been building for at least 9 years, but soccer has yet to make any move, any rule change, that would reduce the number of headers during a game — i.e. that would diminish the number of incidents like the ones I described above, the dangerous inci-acci-dents that are now so often dismissed as “part of the game.”

IFAB should take a look at how quickly the NFL reacted to the alarming case of the Miami Dolphins quarterback Tua Tagovailoa, who was allowed to re-enter a game after suffering a serious head injury. He was declared fit enough to start another game four days later. In that game he suffered another head injury and was stretchered off and taken to the hospital.

Within two weeks, the NFL announced changes to the protocol, bringing in more stringent measures to ensure that there would be no repeat of what happened to Tagovailoa. I do not believe there is any record of IFAB even recognizing a crisis, never mind taking action to combat it, within a mere two weeks.

referees
3 comments about "Can soccer back up the claim that its rules contribute to the safety and welfare of players?".
Read more comments >
Next story loading