Safely south of where Hurricane Nicole passed through the previous night, the USA and Germany served up a tense battle with a stormy finish in Thursday's Fort Lauderdale friendly. The USA's energetic but imprecise performance ended with a 2-1 loss. After a goalkeeper own goal gave Germany the lead in the 55th lead, the U.S. veterans Alex Morgan and Megan Rapinoe combined for an equalizer in the 85th minute. But Paulina Krumbiegel's 89th minute goal made it three straight defeats for the USA following its October losses at England and Spain. 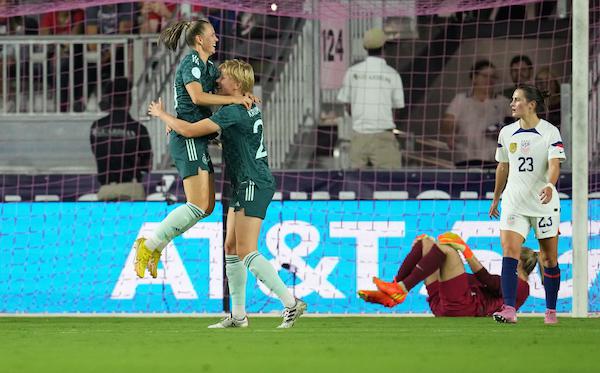 After a first half that required just two easy saves, Casey Murphy passed her first test on Krumbiegel's shot from 12 yards that was hit hard although not wide enough to make it a very difficult diving save. After a scramble on the rebound, Klara Bühl's shot from 18 yards hit the post and bounced off the back of the sprawling Murphy. It was as unlucky an own goal can be.

Central defender Norma Girma was the only U.S. field player not in or at the edge of the German penalty area on the Mallory Pugh corner kick after which the Germans' counterattack led to the opening goal. While retreating, Girma failed to pull off the difficult task of impeding the fast-charging Bühl. Sofia Huerta, whose right side looked the most vulnerable, could have nipped the counterattack in the bud if she had controlled the ball instead of popping it up to Bühl. Huerta was far out of position when Jule Brand streaked down the wing to set up the gamewinner. Left back Emily Fox in the first half helped build forays on the wing, and fared significantly better defensively than her 63rd minute replacement. Girma's central partner, 5-foot-9 Alana Cook was outjumped by 5-7 Laura Freigang for a close-range header down the middle that Murphy tipped over the bar. Cook's most impressive intervention, in the first half, still granted the Germans a corner kick when it seemed she had time to do more with the ball. Cook was off guard as the ball flew to Brand, who easily ran past Cook's attempt to interfere with the game-winning assist.

As a trio, the starting midfield of Rose Lavelle, Lindsey Horan and Andi Sullivan seemed surprised when the Germans surged in the second half and the USA lost the grasp on the game it enjoyed in the first half. Earlier on, Lavelle was involved in most of the USA's promising forward progress but faded before being subbed in the 63rd minute. Horan's day was marked by misses and misfortune. She headed wide from 6 yards and from the same distance saw her shot deflected onto the crossbar. In the 43rd minute she blasted a 20-yard free kick into the wall. Seconds later she deserved a penalty kick call when clearly tripped by Alexandra Popp. Horan unleashed a brilliant scissors kick off a corner kick from 14 yards that hit the post, and of all things sparked the German counterattack that created the 1-0. Sullivan failed to prevent Bühl's shot that ended up in the net via Murphy.

It was frustrating to watch Mallory Pugh and Sophia Smith so often make promising moves only to see their forays fizzle with a poor pass or shabby shooting — plus the occasions when their crosses did find teammates who didn't finish. (Besides its goal, the USA's other 17 shots forced two saves from German keeper Merle Frohms.) Pugh cut wide twice to give herself a narrow angle on shots that went straight to the keeper — instead of cutting to the middle for a shot from her left foot, which did score two of her 11 goals in the 2022 NWLS season. Smith, called offside three times within 20 minutes after kickoff, and Pugh did manage to keep the German outside backs too occupied to attack and the Germans went forward most boldly after the duo left. Center forward Alex Morgan hardly troubled the German backline. Her one shot went high. With her biggest contribution being a pass for a unsuccessful Smith shot, she looked headed for a disappointing outing until the 85th minute. After hitting an easily intercepted pass into the penalty, she closed down the German defender who attempted to clear the ball and and after blocking and controlling the it, served Rapinoe up for an easy finish.

Left back Crystal Dunn misplayed a pass while the USA was attacking a few minutes after coming on and her touch didn't improve much. Twice in the U.S. penalty area her clearance attempt gave the ball back to the Germans. One offered Chantal Hagel a shot from 12 yards out that went high. Dunn lost track of Krumbiegel on the deciding goal. The subs came as the Germans switched gears and started attacking swiftly. They also quickly adapted to Trinity Rodman's counterattack threat and kept her bay. Megan Rapinoe's 83rd minute free kick, well within scoring range, struck the head of a German defender. But Rapinoe didn't disappoint the fans who gave her a rousing applause upon entry by scoring the equalizer thanks to her alert reaction after Morgan stole the ball.