The USA recovered from a 1-0 deficit and a miserable first-half performance to beat Germany, 2-1, in New Jersey on Sunday. Coach Vlatko Andonovski made two changes from Thursday's 2-1 loss to the Germans: goalkeeper Alyssa Naeher for Casey Murphy and central defender Becky Sauerbrunn for Alana Cook. Germany coach Martina Voss-Tecklenburg made seven changes to her starting lineup. 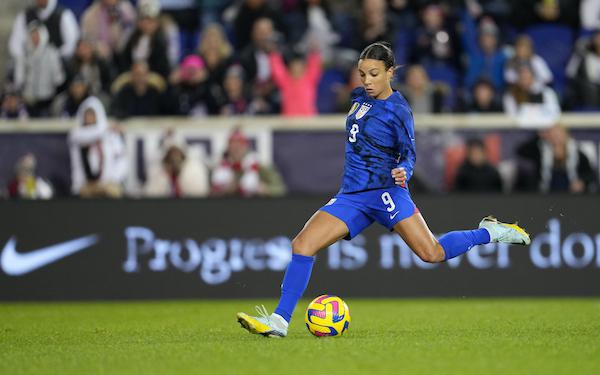 Alyssa Naeher stumbled after trying to anticipate Sophia Kleinherne's shot (blocked by Sofia Huerta) then couldn't reach the low shot from Jule Brand that wasn't particularly well hit from 11 yards for Germany's 18th minute goal. Naeher snuffed Lina Magull on a breakaway and her quick throw sparked the counterattack that created U.S. momentum ahead of the 1-1 equalizer. Distribution with her feet was less impressive and included kicks out of bounds and up the middle to Germans.

Within the first 15 minutes, Noami Girma twice denied the Germans a close-range shot by sliding to poke the ball away. She won an aerial battle with Alexandra Popp while getting fouled by the German in the second half, and along with central partner Becky Sauerbrunn brought composure to an initially overwhelmed U.S. team. Left back Emily Fox was out of position ahead of Germany's goal. Sauerbrunn moved wide and blocked Svenja Huth's first cross but not her second. Fox and right back Sofia Huerta struggled with tasks simple and challenging in the first half before getting a grip in the second half.

Rose Lavelle had two chances inside the penalty area to provide the USA an equalizer before halftime time but neither shot, despite no nearby German pressuring, came close to the Germans' goal. She prevented her performance from being a complete disappointment with two crisp touches getting the ball to Sophia Smith on the equalizer. Lavelle's last miss, an even riper chance than her first two, also went wide, but at least missed close to post. Andi Sullivan pounced on a loose midfield ball to serve Mallory Pugh on the gamewinner. It's hard to imagine the USA pulling off the comeback without Lindsey Horan's unrelenting midfield toil, which prevented the Germans from maintaining momentum and was accompanied at times by the clever pass.

The speedy attackers — Mallory Pugh and Sophia Smith — singled out for praise by German coach Martina Voss-Tecklenburg ahead of the two games — flattered to deceive until they each scored within three minutes early in the second half. Smith scored the equalizer and Pugh the gamewinner as the German defenders seemed surprised following a first half in which they constantly robbed American attackers of the ball. Pugh especially became more menacing. Lavelle, Alex Morgan and Horan could have scored from her setups. That the lenient referee cautioned Kathrin-Julia Hendrich for a foul on Pugh demonstrated the Germans resorted to desperate measures to stop her. Morgan shot high and wide on a half-volley from outside corner of goal area in first-half stoppage time. Her next best chance came in the second half when her poor right-footed first touch on a good pass from Pugh set up a weak off-balance left-footed shot.

Coach Andonovski kept his starting 11 together until the 83rd minute. Taylor Kornieck made a couple forays that kept the Germans preoccupied while seeking an equalizer. Referee Marianela Araya Cruz will find it impossible to explain why she didn't red card German goalkeeper Almuth Schult for a violent foul on Kornieck 10 yards outside the penalty area. Schult didn't even get cautioned.