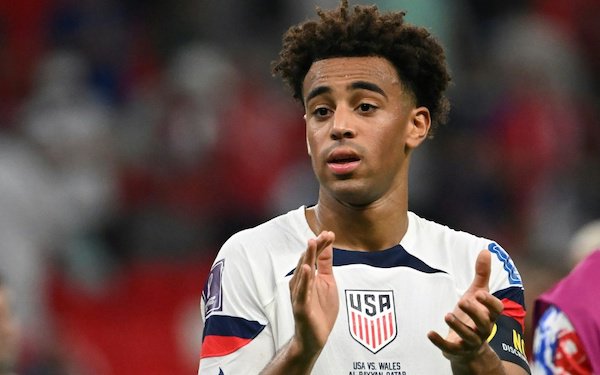 When the USA plays England on Friday night at the Al Bayt Stadium, the northern-most of the eight World Cup stadiums in Qatar, it won't be the first time they have met at the World Cup.

The USA famously defeated England, 1-0, in 1950 and tied England, 1-1, in 2010 en route to winning their group in South Africa. But history doesn't often come in the discussion of Friday's meeting.

There's been the perception that English soccer -- specifically, the Premier League-- dwarfs over American soccer.

It is true that the brand — Premier League — has never been stronger in the United States. It was hard to watch English soccer anywhere when the Premier League launched in 1992.

"I remember while I was in Holland getting home from my games on Saturday, watching Match of the Day on BBC, and that was the only real highlights we got," said U.S. coach Gregg Berhalter, who began his pro career in 1994 in the Netherlands, where he spent six seasons. "And now every Saturday morning in America, you're waking up to watching the Premier League and seeing all the fan festivals they're having. Everyone now in America seems to have a team that they support."

For Tyler Adams, the U.S. captain, that team was Arsenal.

"I grew up a huge Thierry Henry fan," he said on Thursday during the pre-game press conference he attended with Berhalter. "I think partially because he played for New York Red Bulls but also growing up I watched a lot of Arsenal games as well. I admired how he played the game. In America, you see a lot of young players tuning into to a lot of the Premier League games. They're on in the mornings. They're easy to tune into."

A big reason for Adams' interest in the Premier League was the collection of international stars it attracted.

"You saw a lot of quality players on the pitch at the same time, no matter which teams were playing in the Premier League," he said. "So for me, it was always a dream of mine. I remember telling my mom at a young age that I wanted to play in England,"

He says making the move to Leeds United this season was a lot easier than when he left the Red Bulls to join RB Leipzig in Germany — "The culture is not too far off of what America has to offer," he said — though he admitted that it's still taking time.

"I'm American wherever I go," he said. "No Yorkshire accent yet. I haven't tried any of the food yet either, really. So I can't say that I'm assimilating too well."

Adams and American teammate Brenden Aaronson moved this summer to Leeds, where they play for American manager Jesse Marsch. Six English-based players — Matt Turner, Tim Ream, Antonee Robinson, Christian Pulisic, Josh Sargent and Adams — started against Wales on Monday, and that doesn't include Yunus Musah, who grew up in the Arsenal academy and whose parents live in London.

Those English connections aren't much different than they were in 2010 when the USA and England tied, 1-1, in Rustenburg. Four U.S. starters — Tim Howard, Jay DeMerit, Clint Dempsey and Jozy Altidore — played for English teams, as did one of the two subs, Stuart Holden.

The players on the current team are a lot younger than the 2010 team, which reached the round of 16, but their connections to English soccer at younger ages, first as fans and then as players, have made it more accessible.

Adams was asked on Thursday whether that meant the intimidation factor had been reduced.

"England's still a big team at the end of the day," he said."Intimidation factor? I wouldn't say there's many things out out there that intimidate me other than spiders."

He said it's great to get a chance to play against big stars like those on England, which opened the World Cup with a 6-2 win over Iran.

"I've done it before," he said. "But we also want to show that what we're capable of and that U.S. soccer is growing and developing in the right way."