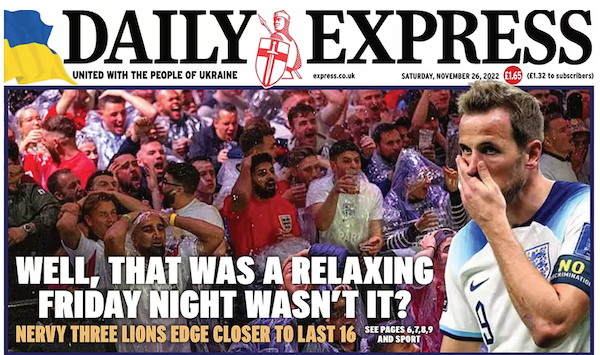 American media hailed the U.S. performance while the British press pointed to the game's dullness.

British tabloids couldn't resist an allusion to Bruce Springsteen's hit to describe the scoreless tie. All three also included a shot from the stands of Georgina Irwin, fiancee to England backup goalkeeper Aaron Ramsdale, to illustrate the lack of excitement from the scoreless tie.

"Led by Tyler Adams and Hershey’s Christian Pulisic, the Americans out-shot England by a 10-8 margin at Al Bayt Stadium in Al Khor, Qatar. For long stretches of the game, they were so clearly the better team that even the millions of soccer novices who watched after their Black Friday shopping could have understood which team should be winning. But they did not win, which means a victory in Tuesday’s group stage finale against Iran is required to advance." — Jonathan Tannenwald (Philadelphia Inquirer)

"The battle between football and soccer was played out last night in a bedouin tent pitched in the middle of the Qatar desert. It ended with a scoreless draw as boring as the debate about the name of the game." — The Times of London

"England helped by not pushing the game on the U.S., really, until the last 15 minutes or so. But the team was organized and that 4-4-2 wrinkle helped out there. The U.S. were pressing, didn't make it easy on them and got a great effort from everybody. If anything,

"I would've made the substitute changes a little earlier. The legs started to look tired around the 65th, 70th minute and some fresher legs would have made a difference. Credit to Gregg, though, this was a strong result."
— Bruce Arena, the USA World Cup 2002 and 2006 coach, from his report card for MLSSoccer.com.