I got to see Lionel Messi score at the World Cup 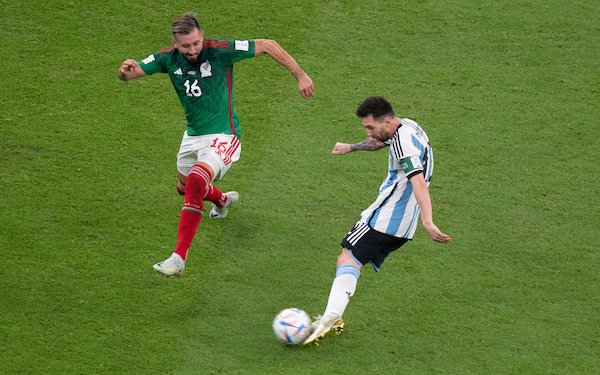 I am not sure how many more World Cups I have in me, but I don't feel any obligation to attend any more.

I got to see Lionel Messi score on Saturday night.

Not just any goal, but a goal that summed up everything that is magic about him and might have saved a nation from a complete meltdown, to boot.

It certainly made the trek worthwhile.

Saturday was our off-day following the USA's 0-0 tie with England, and our bus took us to Lusail, about a half an hour north of our home base in Al Rayyan, to as close as security would allow us to get to the Lusail Iconic Stadium before we were stopped.

It was already dark when we got out, and we will still had about two miles to walk. You see young men and women outfitted with giant hands pointing you in the direction you need to go all around stadiums and transportation sites in Qatar, but you didn't need them lining the freshly built walkway to find your way.

Think Giants Stadium in the Meadowlands when you imagine the Lusail Iconic Stadium -- there's nothing around --  but a stadium in the shape of a giant Arabic bowl all lit up in lights in the desert.

The Lusail Iconic Stadium is the biggest of Qatar's eight World Cup stadiums -- it will host the World Cup final on Dec. 18 -- and it was filled to the rafters for Argentina-Mexico. (Following the World Cup, the rafters will be lopped off, reducing capacity to 40,000.)

Attendance was announced at 88,966, the highest for a men's game at the World Cup since 94,194 for the 1994 final between Brazil and Italy at the Rose Bowl. The familiar sight of Mexican fans decked out in green packed the area behind the goal to our right, but El Tri's support was nothing like that at the other end and throughout the middle sections, a sea of light blue and white in jersey of La Albiceleste. We're talking upwards of 50,000 Argentina supporters.

Not all were Argentinos -- many were locals who have adopted Argentina as their team -- but they all knew what was at stake. Argentina's shock 2-1 defeat to Saudi Arabia in its opening match at the 2022 World Cup left it on the brink of elimination just a week into the tournament. A defeat to Mexico would have eliminated Argentina and surely ended the 35-year-old Messi's career without winning the World Cup.

Mexico didn't play particularly well, but it frustrated Messi and his Argentine teammates for the first hour. Argentina began to play better in the second half , though, and finally through in the 63rd minute when Messi collected a pass from longtime teammate Angel Di Maria, took a touch and rolled the ball through a crowd of Mexican defenders past blinded El Tri keeper Guillermo Ochoa from outside the area.

"It took a moment of inattention to cost us," said Argentine Tata Martino, Mexico's embattled coach. "We lost everything in 30 seconds."

Messi, whose moment of magic tied him with the late Diego Maradona with eight World Cup goals, pointed to the sky before joining his teammates in celebrating with their fans behind the goal, but the image of the tournament was former Argentine star Pablo Aimar, now an assistant coach, in tears on the bench, overcome with emotion by the goal.

Messi's goal liberated the Argentines, and he set up Enzo Fernandez for a second goal in the 87th minute. The most amazing scene of the evening was hearing thousands of Argentine supporters still singing in the stands after their heroes had left the field to return to their locker room to celebrate the 2-0 win.

Argentina's three points kept it alive, but its work is not yet complete. It needs to beat first-place Poland on Wednesday to be assured of advancing.

Afterwards, head coach Lionel Scaloni was asked about the emotion of Argentina's World Cup campaign jolted by the Saudi loss and Aimar's reaction to Messi's goal.

"You have to have some common sense, it's just a soccer match," he said. "I received a message from my brother saying he was crying and it can't be like that. It's as if it were more than a soccer match. I don't share that."

"The players must understand it's a soccer match," he added. "If not, it will be like this in every match. It's hard to make people understand that the sun will rise tomorrow, win or lose."

world cup
2 comments about "I got to see Lionel Messi score at the World Cup".
Read more comments >
Next story loading