Top scorer Valencia back in World Cup spotlight with Ecuador 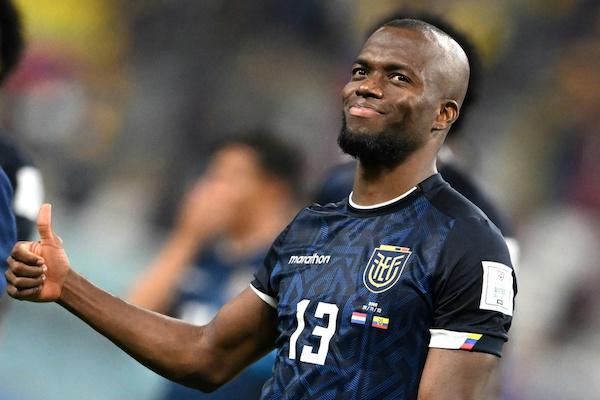 Journeyman Ecuador striker Enner Valencia has drifted in and out — mainly out — of planet soccer's consciousness.

The striker skirted the periphery of relevance until arriving at the World Cup, where suddenly he is in his element.

Ecuador's 33-year-old captain burst into the limelight in Brazil 2014, scoring three in the group phase against Switzerland and Honduras, although his team was eliminated.

Eight years later, in the Qatar curtain-raiser on Nov. 20, Valencia spoiled the party for the hosts with both goals to secure a 2-0 win and saw another ruled out.

Valencia's spot-kick opener made him the oldest player to score the tournament's opening goal.

Ecuador thrilled against the Netherlands in its second game and deserved more than a 1-1 draw, in which Valencia struck again, emphasizing his penchant for the big occasion.

Valencia is the tournament's joint top goalscorer, along with France's Kylian Mbappe, on three goals from two games.

"We know what a spectacular captain we have," said left back Pervis Estupinan.

"He is always fighting to improve."

Valencia is only the fourth player to score six consecutive goals for a nation at the World Cup, behind Portugal great Eusebio, Italy's Paolo Rossi and Russia's Oleg Salenko.

Formerly a winger, Valencia has developed into Ecuador's main goal threat and is their all-time top scorer with 38 goals.

Ahead of the World Cup he suffered a barren spell, with just one goal in eight games, but right on cue, the goals are flowing again in Qatar.

Ecuador's main concern ahead is that Valencia has been forced off injured in both games, because of a knee problem.

"I did tests and it showed I have a knee sprain, which is annoying me a bit," said the striker after the Netherlands tie. "I played through the pain but the important thing is that I could help the team and we're still strong.

"The knee's improving, I have to do good recovery work and I hope to be able to play (against Senegal)."

After starting his career with Emelec in Ecuador's top flight, which he won in 2013, Valencia earned a move to Mexican side Pachuca.
A prolific season with 18 goals in 23 league games earned him a call-up to Ecuador's 2014 World Cup squad, where performances attracted Premier League interest.

West Ham pounced, splashing £12 million ($14.5 million) on the forward, who scored a brilliant goal lashed in from range on his full league debut against Hull City.

It proved a start impossible to live up to and he only managed four goals in 32 appearances in his first league campaign, and the same paltry contribution in his second.

West Ham loaned him to Everton, where he continued to struggle, putting a full stop on his Premier League adventure.

During his time at Everton in 2016, Valencia made headlines when he was chased by police back in his homeland out of a stadium.

The forward was appearing in a World Cup qualifier against Chile but after injured, he sped off in a cart alongside the field while police plodded after him.

They were trying to question him over unpaid alimony per allegations from his ex-wife, with the arrest warrant later revoked.

Valencia spoke out on Twitter after the incident, saying he had won custody of his then 5-year-old daughter Beira.

He headed back to Mexico in 2017 for a more successful three years with Tigres, before Turkish side Fenerbahce signed him in the summer of 2020.

With 13 goals in 12 games, Valencia is the division's top goalscorer this season, finding the kind of form Ecuador are now profiting from.

The country's hopes are pinned to Valencia's mast once again, and if he delivers against Senegal he can fire them into the knockouts for only the second time in their history.