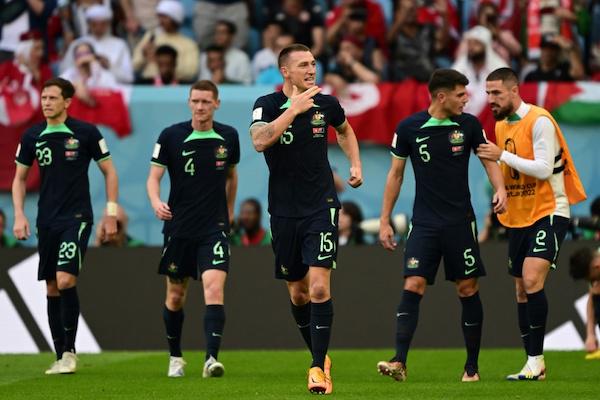 Mitchell Duke wouldn't be high on anyone's list of World Cup stars but the journeyman forward is pivotal to Australia's hopes of reaching the last 16 for only the second time.

Lionel Messi, Kylian Mbappe and Robert Lewandowski all scored crucial goals in Qatar on last weekend — and so did Duke, who plays in Japan's second tier and turns 32 in January.

Duke gave Tunisia's defense a torrid time with his physicality but his 23rd minute header for what turned out to be the winner was a thing of beauty as he deftly glanced the ball over his shoulder and into the net.

The old-fashioned center forward wheeled away in celebration and made a letter "J" with his hands for his watching son, Jaxson.

"I haven't seen it yet but apparently he did it back to me from the stadium, which was a really special moment and I'm going to treasure it for the rest of my life," said Duke, who had predicted he would score.

The Age newspaper in Australia called it "a night he'll never forget."

"Showed exactly why Arnold has shown so much faith in him over the years," the newspaper said, referring to Socceroos coach Graham Arnold.

"Worked hard in every way and took his goal brilliantly."

Duke's header was his ninth goal in 23 games for the Socceroos but equally as important was the way he bullied Tunisia's backline and was Australia's first line of defense in their 1-0 win.

Eventually Tunisia got fed up and rammed through the back of him, leaving the forward sprawled on the grass clutching the lower part of his back.

Duke was not down for long and he then exchanged some feisty words with the Tunisia bench.

Duke will once more be the focal point of Australia's attack when it faces face Denmark on Wednesday in their final Group D game, with a spot in the knockout round in their own hands.

The Socceroos have only reached the last 16 once, in 2006, when they had the likes of Harry Kewell, Tim Cahill and Mark Viduka.

Duke would not pretend to have the subtlety and touch of former Premier League striker Viduka, but Arnold says he does not get the credit he deserves.

"I've obviously got a lot of faith in the kid," Arnold said after the Tunisia victory. "I always know that when he walks over that white line he will give more than 100 percent not only for the team but also the jersey and the nation."

Duke, who is 6-foot-1, has bounced around between clubs in Australia, Saudi Arabia and Japan on loans and free transfers.

He last pitched up at Fagiano Okayama in Japan's second division in August last year and has scored 11 times in 51 games.

After his finest moment in a Socceroos shirt, Duke reflected on the trajectory that his career has taken and the toll on his family life.

His children live in the United Kingdom.

"When the full-time whistle went and I got interviewed, I was trying to hold back the tears because it is a very special moment for me," he told reporters.

"There's been a lot of sacrifice for family. I've been on my own a lot the last couple of years, it hasn't been easy.

"But these kinds of moments make those sacrifices worth it and that's the mentality you need to have."

"It's just the best feeling in the world," Duke added.