Carlos Queiroz on Iran's motivation, what facing USA means to him and the power of soccer 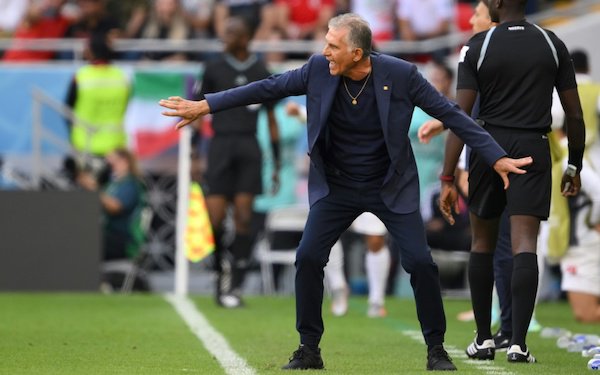 This is Iran's sixth trip to the World Cup, and the 2022 tournament is its best chance to finally get out of its group.

Friday's 2-0 win over Wales, which followed a 6-2 loss to England four days earlier, was only the third Iranian victory in 17 games at the World Cup. But a win or (probably) a tie against the USA on Tuesday night will send Iran into the second round for the first time. The USA must win to advance.

That opportunity, says its veteran Portuguese coach Carlos Queiroz, is the only edge he sees Iran having over the USA when they meet in their final Group B match in Doha.

"This is not about yesterday," he said at Monday's pre-game press conference at the QNCC media center. "This is about tomorrow. Let's try to do our best because to be in the second round would be first time in six World Cup qualifications. This motivation is probably stronger than the United States' because the U.S. did that in 1994. For us, it's more special than for them."

In the modern era, the USA went to the World Cup seven straight time times before missing out on Russia 2018. It advanced out of the group stage in 2002, 2010 and 2014 in addition to 1994 when it hosted the tournament and Queiroz was at the Stanford venue, where Brazil with a 1-0 win eliminated the USA in the round of 16.

He later coached the MetroStars for the second half of MLS's inaugural season in 1996 and then served as a consultant to U.S. Soccer on Project-2010, whose report he authored.

Queiroz said he was proud to coach Iran for the third time with a chance to finally go to the second round but also termed the USA-Iran game a special match for him, given his involvement in American soccer in its formative years.

"I had the opportunity to work for MLS at the beginning of MLS, help football in the United States grow up," he said. "I also worked with the U.S. soccer national team. So being part of this great family of football, the United Nations of football, is an honor and a privilege. As a compliment to the U.S. national team, after those first two games, I can [sum up] in one word the profile of the team — they jumped from soccer to football."

Queiroz praised the USA as a "great team," different from what he saw when he first started following it in the early 1990s.

"The team in this group that produced the best two performances was without any doubt the United States," he said. "They played two great and fantastic games."

In the last 24 hours, controversy swirled about U.S. Soccer's social media posts that altered the Islamic Republic of Iran's flag. Queiroz dismissed the posts intended to show support for women in Iran, saying that if he paid attention to them he'd be "lying to football" and lying to his father and everything he taught him.

"If after 42 years in this game as a coach, I still believe that I could win games with those mental games, I learned nothing about the games," he said. "These collective events surrounding this World Cup, I hope, will be a good lesson for all of us in the future and we will learn that our mission here is to create entertainment and at least during 90 minutes make the people happy."

Queiroz then went on a long speech, beginning with the power of soccer:

"I was born in a place in Africa [Mozambique]. Some of you know my background. You don't know what one simple ball can do for kids who sometimes for one or two days don't eat. They don't have nothing to dress. And when we stop our cars, we open the cars and we put one ball in those parks. And you cannot imagine the magic moment that happens in the faces of kids and from sadness they change in one fraction to a smile. This is our mission."

He said he supported all causes.

"We have our solidarity with all humanitarian causes, but we are in solitary to the humanitarian causes all over the world, whatever they are, whoever they are. If you talk about human rights, racism, kids that die in schools with shootings, we are in solidarity. We support all those causes. But here our mission is to bring the smiles for the people, at least for 90 minutes, right?"