Morata's time may be now for Spain after underwhelming decade 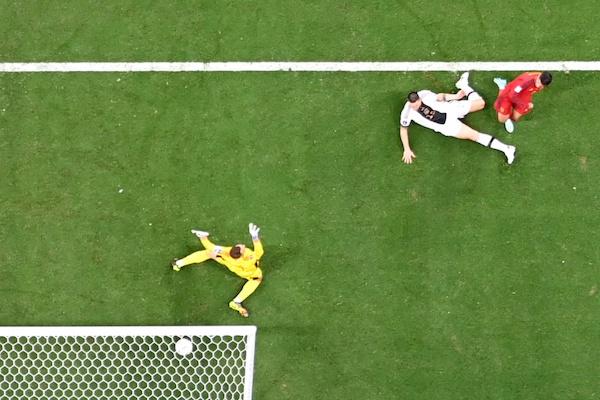 Alvaro Morata strikes for Spain against Germany at the World Cup.

Spain and Atletico Madrid striker Alvaro Morata has a star-studded resume, spending time at Real Madrid, Juventus and Chelsea, but is rarely considered an elite striker.

Two LaLiga titles, two Serie A titles and two Champions League trophies feature in his honors list, and yet, at 30, it feels as if Morata has underwhelmed for much of his career.

But it was his well-taken strike that sent Spain ahead against Germany in their 1-1 World Cup draw last Sunday, and another sign that finally Morata's time to shine has arrived.

"Now is all," insist the Qatar World Cup organizers, a slogan pasted around Doha and yelled out by field-side announcers, but one Morata can take to heart, after years of nearlys, not-quites and almosts.

The forward, who came on as a substitute against both Germany and also Costa Rica, in Spain's emphatic 7-0 opening day rout, scored and set up a goal against Los Ticos.

Morata has put in good performances with Diego Simeone's Atletico Madrid this season, despite only five goals in 14 LaLiga matches.

He netted a last-gasp goal for Spain against Portugal in September to send La Roja into the Nations League final four.

And even though Luis Enrique has thus far chosen winger Marco Asensio ahead of him in the starting striker spot, Morata seems sure of himself and able to take his chances when they come.

"I feel comfortable in the national team, I am proud to be here," Morata told a press conference, after he was named man-of-the-match against Germany.

"It is not easy, the demands on us and the pressure are very high, whether you are a starter or a substitute.

"I want to win all the games, I'm a soldier like everyone else, and we'll go to the death together. As well as being a great team we are a great group and very united."

Morata started his youth career at Atletico but switched to Real Madrid and made his debut in 2010 for the first team under Jose Mourinho.

The next few years moved slowly, although he did make an appearance off the bench in the 2014 Champions League final, with Madrid beating Atletico in overtime.

That summer Morata signed for Juventus, in search of regular playing time, netting in both legs of the Champions League semifinal to knock Real Madrid out — but Barcelona triumphed in the Berlin final.

Real Madrid exercised a buy-back clause in the summer 2016 and Morata became a useful part of the squad for a season, even though he was part of Zinedine Zidane's second string side, behind Karim Benzema in the pecking order.

With a league and Champions League double in his pocket, Morata decided to try his luck in the Premier League with Chelsea.

Shy and a little sensitive, Blues fans thought he lacked conviction when compared to his predecessor Diego Costa, especially after arriving for a then club record fee of 60 million pounds ($73 million) in July 2017.

Morata lost his place to Olivier Giroud and in January 2019, he was shipped off to his first youth side, Atletico, on an 18-month loan — although they quickly decided to made the deal permanent.

But by the summer of 2020, after a disappointing first full campaign, Atletico loaned him to Juventus.

The Italians extended a one-year deal for another season but did not sign him and Morata returned to Atletico in July 2022.

He started the season amid uncertainty over his future, but has earned his place in Simeone's side.

Luis Enrique kept faith in him, despite clamor for other players like Iago Aspas or Borja Iglesias to be included.

At Euro 2020 the coach defended Morata through thick and thin, even though he missed various big chances.

Morata is paying him back, and after a decade of unfulfilled promise, maybe now really is all.