'It's complicated': Mixed emotions for 'Tehrangeles' as Iran and USA meet 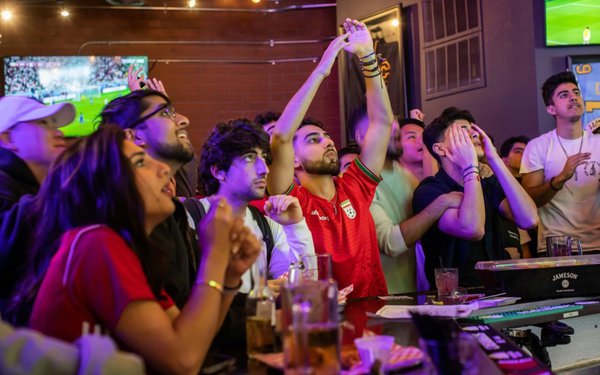 It was -- mostly -- about the soccer for fans watching the USA-Iran game in the United States on Tuesday, a match played against the backdrop of soaring geopolitical tensions, which occasionally poked their way through the sport.

Scores of supporters packed a restaurant in a part of Los Angeles known locally as "Tehrangeles" because of the large number of Iranians and Iranian-Americans in the area, cheering their way through a lively meet-up happening half a world away.

Chants of "USA, USA" erupted periodically as the U.S. men's team dominated action on the pitch in Qatar, bagging their first win of the tournament by a score of 1-0 and securing a spot in the knockout stage.

For some Iranian-Americans, either outcome would have worked.

"I support both," said a woman who gave her name only as Shirin.

Iran's team have been under intense scrutiny in Qatar, their players watched for signs that they are -- or are not -- showing support for mass anti-government demonstrations back home, sparked by the death of 22-year-old Mahsa Amini while in custody of the notorious morality police on Sept. 16.

Players opted not to sing their national anthem before Iran's 6-2 defeat to England, in an apparent sign of support for the demonstrators at home, but did sing ahead of their 2-0 win against Wales.

As the anthem struck up ahead of Tuesday's kick-off, some Iranian fans in Los Angeles raised their middle fingers to the screen as players mouthed the words.

Others were more reserved.

"Honestly, considering the situation in Iran I found myself torn, so I felt good about the game either way honestly," said Aubteen Maroufi, an Iranian-American in his 20s.

In a bar in Washington D.C, one Iranian-American who gave his name as Mike said he had mixed feelings about the game, but had been rooting for the United States.

U.S. fans in Los Angeles, basking in victory as "Born in the USA" by Bruce Springsteen reverberated over the restaurant's sound system, said the game and the politics were separate.

"I don’t think supporting the Iran players means you are supporting the regime. It’s two different things," said supporter Max Spear.  "I know some people used the game to show support to the revolution by booing the national anthem, but I don’t think this game is a West versus East thing."

There was some animosity, with one group of younger men wearing Iranian jerseys making rude gestures every time a US player appeared on screen -- although whether this was because of diplomatic tensions or good old-fashioned footballing rivalry was difficult to tell.

"We played hard," said one of the men, kissing his jersey.

One Iranian-American, who gave her name as Rachel, said she was firmly in the US camp.

But asked about the politics of her adopted homeland meeting its biggest international foe in metaphorical battle, she demurred.

"It’s a really complicated question, I don't want to answer it," she said.