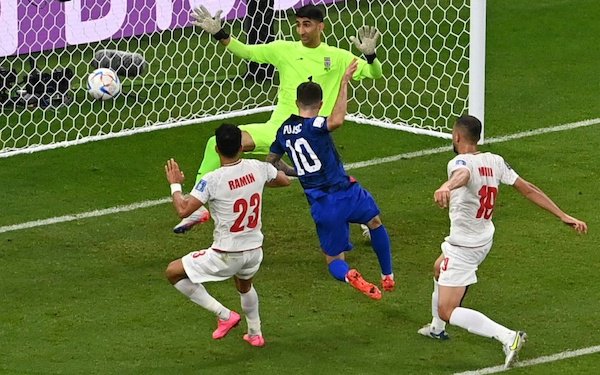 The U.S. national team has advanced to the knockout stage of the 2022 World Cup following a grueling 1-0 win over Iran to secure second place in Group B. The game wasn’t pretty, but the U.S. was very effective in limiting Iran’s chances and scoring in the first half to alleviate the pressure of needing to score as minutes ticked off the clock.

After three games, many themes remain the same for this U.S. squad.

First, the U.S. team continued to grow in maturity both in dealing with the pressure of the moment, finding what needed to be done, and in closing a game out. The improvement the team has shown since the Wales game alone is significant.

Second, the commitment to defense among the midfielders and front line has been a driving force as to why the team only conceded one goal in the group stages. The USA is led by Tyler Adams in the defensive midfield position, and most opponents have seen their chances fall apart before the backline is even tested.

Third, and on the critical side, the USA continued to be unproductive at center forward and from set pieces. That has worked in group stage games but moving forward into the knockouts where the U.S. team is attempting to pull off upsets, those weaknesses need to be overcome. Typically, set pieces are at the heart of upsets.

Here are some more thoughts on the U.S. team in the win over Iran ...

If you were to make a World Cup Best XI for just the group stages, there is an excellent chance that Tyler Adams would be the defensive midfielder. Against Iran, Adams played his third big outing in a row. The stats showed he had 84 touches and was highly successful winning duels, passing from distance, and breaking up Iranian attacks.

Adams alleviating so much pressure from the backline has been critical to the team’s success. Even with Christian Pulisic’s long list of accomplishments, Adams is the team’s most indispensable player. When Adams is on his game, there are very few who can do what he does.

Adams is also a great model for the modern development path for an American player. He came up through U.S. development channels that were not available to previous generations. When the U.S. team achieved success 20 years ago in South Korea, there was hope that this would give rise toward mechanisms that create continued success. That has happened and Adams was able take advantage of the new pathway. 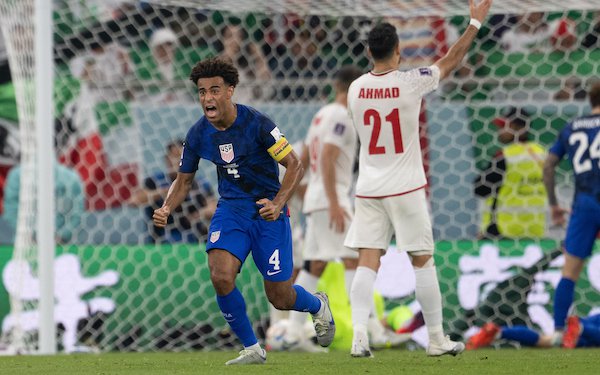 He signed an MLS homegrown deal, played for U.S. youth teams at the U-17 and U-20 World Cups, and won a USL title with Red Bulls II. He then helped the Red Bulls win the Supporters' Shield. His success with the Red Bulls put him on the U.S. national team. He firmly made his stamp on the domestic game before earning a sale abroad where he played in a Champions League semifinal with RB Leipzig. From Germany he moved to the Premier League. Now he’s the captain of the national team at the World Cup and is preparing for the round of 16.

When you consider that he is not even 24 yet, it's even more remarkable.

Others who took a similar route to Adams' included Brenden Aaronson and Mark McKenzie at Philadelphia and Canada’s Alphonso Davies with Vancouver, but Adams has been carrying the torch in modern American player development.

Christian Pulisic has been the face of the current generation of young American players. He’s also been groundbreaking, given his Champions League success. Even with his uncertain status at Chelsea, he has raised the level.

At the international level, he has always been there for the USA at big moments – such as wins over Mexico in the Nations League final and then in World Cup qualifying. For the national team, to be considered with the team’s greats he needed to deliver on the big stage. Clint Dempsey scored in three World Cups and in the win over Spain at the Confederations Cup. Landon Donovan helped carry his team to the quarterfinals of the 2002 World Cup, the semifinals of the Olympics, the final of the Confederations Cup – and then, of course, the Algeria goal. Brian McBride had success with the USA as the best true No. 9 the USA has produced.

For Pulisic to get there, he needed to have his moments on the international side of the game outside of Concacaf. The assist to Tim Weah against Wales certainly laid the foundation but this goal against Iran was it. He can now stake his claim at being not just a groundbreaking and great American player, but a great U.S. national team player.

It wasn’t a beautiful goal, but Pulisic risked injury (which he suffered) to give his team the decisive goal and change the tone of the game.

Pulisic says he will be ready for Saturday, but players are often the last person to trust about a recovery from injury ahead of a big game. If he can indeed play against the Netherlands, it will be a huge emotional lift.

Closing out the win over Iran was not easy. Fatigue set in. The team was missing Pulisic in the second half and Coach Gregg Berhalter also had to sub out Sergino Dest and Weston McKennie because they are not yet 90 minutes fit after battling through injuries in October. Even Tim Weah is limited physically after only starting his first game of the season for Lille in late October.

Berhalter had to get creative. He shifted formations to a five-man backline in a 5-4-1 by putting Walker Zimmerman into the back to win aerials – which he did. Possession was conceded and Iran was launching balls into the box. The Iranians had a few dangerous chances but generally the team was able to keep its composure when playing in a tough situation.

It wasn’t perfect. The U.S. team needs to be better on the counterattack and Shaq Moore and Haji Wright missed opportunities to put the game out of reach. But the defensive composure has improved, and the team is more mature now than it was when the tournament began. There was no panic from the team’s defense and goalkeeper Matt Turner was never called upon to bail the team out. There were certainly nerves as Iran controlled possession for the final 12 minutes of regular time and the 10 minutes of stoppage time, but it was a positive sign that the defense would bend without breaking. 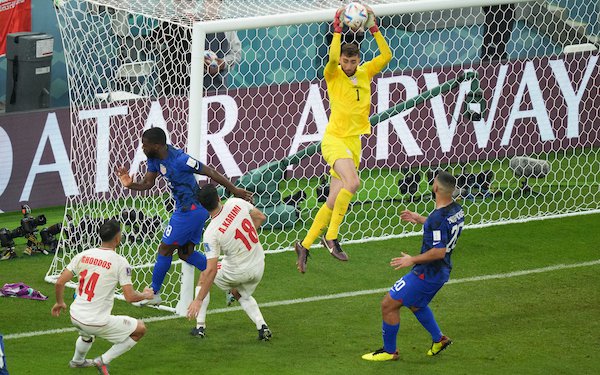 The USA was able to control the play for 70 minutes against Iran in large part due  to the play of its fullbacks. Sergino Dest and Antonee Robinson were on the ball a ton and both players stayed far to the outside to stretch Iran’s defense and open play in the middle. That was mostly successful. Dest assisted via a header, his dribbling kept Iran on its heels, and while his defense has been questionable in the past, he has been very strong on that side of the ball in Qatar. Robinson’s engine had him cover a ton of ground, and he was frequently involved in the attack.

Dest and Robinson, however, haven’t been great at crossing in Qatar. In this game, both players sent in a wave of crosses, but neither was able to connect. Dest or Robinson connecting better with crosses would provide a big boost for the USA in the knockouts.

Looking ahead to the Netherlands

There is no doubt that Berhalter knows a big part of what he wants to do against the Netherlands on Saturday. He should be able to keep the “MMA” midfield together as all three have had great tournaments and, thus far, have escaped injuries and suspensions. He will also keep Antonee Robinson and Sergino Dest as outside backs as both have been able to stretch the defense. Central defender Tim Ream is one of the best stories of the tournament given his age, and his re-emergence within the team. Matt Turner has also been a rock in goal. While Tim Weah missed some good chances against Iran, he is a clear starter.

That doesn’t mean there aren’t questions Berhalter will have to resolve. The biggest one that doesn’t involve injury will be who partners with Ream in central defense? Walker Zimmerman started the first two games, and while he conceded the penalty kick against Wales, he’s been solid defensively and performed well against England.  One of the reasons why Berhalter started Cameron Carter-Vickers against Iran is that he expected Iran to sit back similar to how Scottish opponents sit back against Celtic. But against the Netherlands, the USA will be back on its heels more. Does that then make Zimmerman the preferred option as he was against England?

The remaining questions come down to health of key players and what to do if players can’t go.

The issue of Gio Reyna has been murky, but details over just how fit or unfit he is are unclear. That has been unfortunate. Reyna has immense talent but has suffered numerous re-injuries since his original injury he suffered while playing for the USA in September 2021.

If Pulisic can’t go, Berhalter could start Brenden Aaronson, who replaced Pulisic at halftime against Iran. But Aaronson has been a key midfielder to replace McKennie when needed.

There is also the case of Josh Sargent, who was forced out of the Iran game in the 77th minute. If Sargent can’t go or isn’t at 100%, Berhalter might very well turn to Jesus Ferreira because Wright hasn't impressed during the group stages.

No matter what Berhalter decides, it will take an upset to beat the Netherlands. But if the USA plays up to its ability, an upset is realistic.