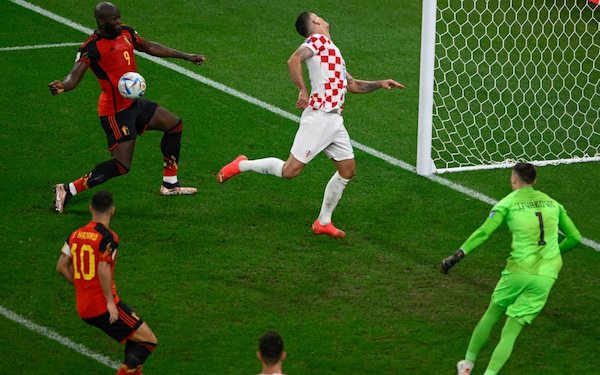 Belgium should not blame Romelu Lukaku for their World Cup exit despite the striker's misses in the goalless draw against Croatia which sealed their fate on Thursday, said teammate Timothy Castagne.

Lukaku, Belgium's record goalscorer, had only played a handful of minutes in the tournament due to injury before coming on at half-time at the Ahmad Bin Ali Stadium.

The striker, on loan at Inter Milan from Chelsea, missed three gilt-edged chances late on when a goal would have sent his side into the last 16.

"I wouldn't say he's the anti-hero because he's there for the chances, he also creates them, he gives, he keeps the ball," defender Castagne told reporters. "Maybe if he's not there, we don't have those chances. I don't think we can blame him, he gave everything, he tried. If it doesn't go in, it doesn't go in."

Michy Batshuayi scored their only goal of the tournament against the Canadians but was not called upon on Thursday.

"Of course I'm disappointed, we're eliminated, we're out of the competition," he said. "I'm a striker and I would have liked to do my job and score, help the team. It's disappointing to go out like that... Belgium had to play better. I'm not going to say that we don't deserve to be out, but we should have played better. Everything is disappointing."

Belgium coach Roberto Martinez said he was leaving his job.

The 49-year-old had been in charge since 2016 and his contract was due to run out after the tournament.

"That was my last game with the national team, I can't carry on," Martinez said at his postmatch press conference. "It's the time for me to accept that this is the last game." 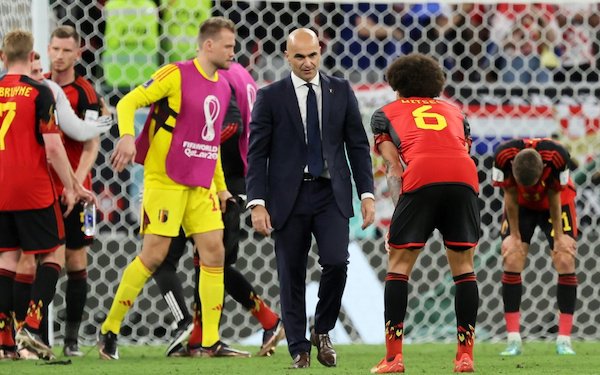 Martinez led Belgium to a third-place finish at the 2018 World Cup in Russia and to the Euro 2020 quarterfinals last year.

But his aging side could not replicate that form in Qatar, crashing out after scoring just one goal in three games. The Spaniard said he was always planning to leave after the World Cup.

"That was the end, whatever would happen, whether we were world champions, whether we went out in the group stage," he said. "It's got nothing to do with being eliminated in the group stage. Since 2018 I had many opportunities to leave, take jobs at club level, but I wanted to be loyal. I don't resign, it's the end of my contract."

Belgium went into the final group F game needing to win to be certain of reaching the last 16 after a 1-0 win over Canada and a 2-0 loss to Morocco.

They were left to rue a string of missed late chances by Romelu Lukaku.

"Today, if we would've gone through I think we would've seen the real Belgium and we could've been very competitive in the next rounds," insisted Martinez. "The disappointment was against Morocco. Today we were ourselves, we played a very good opposition... The first two games we weren't ourselves."

Martinez took over the Belgian national side months after being sacked by Premier League club Everton. He has still only won one major trophy in his managerial career -- the 2013 FA Cup with unfancied Wigan Athletic.

Croatian counterpart Zlatko Dalic believes Martinez will not struggle for offers of other jobs.

"Martinez is my friend, it was a surprise to me," said Dalic, who took Croatia to the 2018 World Cup final. "Belgium have lost a great professional. For four years in a row, they were first in the FIFA ranking. It was his project, but it's not an abrupt end for him."