Christian Pulisic: 'I'm doing everything in my power' to play 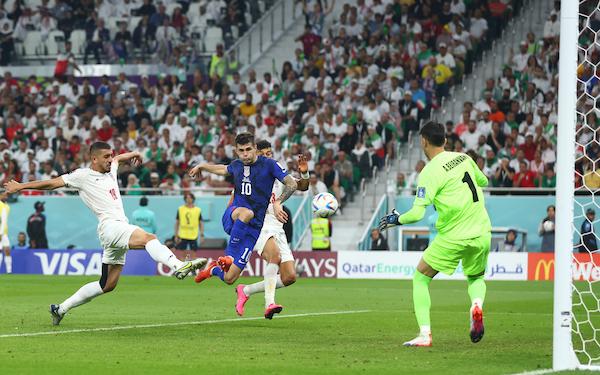 It's the question on the mind of every U.S. soccer fan:

Will Christian Pulisic be ready to play on Saturday when the USA faces the Netherlands in the round of 16 at the World Cup?

Pulisic was injured when he scored the winning goal late in the first half of the 1-0 win over Iran that sent the USA through to the knockout stage. The injury was so bad he had to be taken off at halftime and transported to a Doha hospital, where he watched the end of the game.

On Thursday evening, Pulisic met with the press before training and said he remains "day-to-day" with what is listed as a pelvic contusion.

"I'm going to go meet now with the team medical staff and make a decision on [training] today, just kind of see how I'm feeling, taking it day by day," Pulisic said. "Right now, I'm doing everything in my power to be able to be out there on the field on Saturday."

Was there a chance he can't play? Pulisic reiterated that "I'm taking it day by day right now, and I will do everything in my power to work with this medical team and make sure that I can play."

He described the injury as "very painful" and "excruciating going over it" in response to repeated questioning.

Pulisic wanted to make it clear he "didn't get hit in the balls." He got hit in the pelvic bone.

"That bone is there for a reason to protect you," he said. "I hit it well. It was sore, but it's getting better."

Pulisic scored when he flew through the middle to meet Sergino Dest's header off Weston McKennie's lofted ball over the Iran backline.

"I saw we played great ball over the top," he said, "and my opportunity was there to just to beat the defender to the ball and I was just able to do that. I scored and took a knee. You could see the video after I got hit. It was not nice."

He said he knew he scored but would the goal count?

"I realized the ball went in," he said. "I was a bit confused because the guys around me were trying to keep their distance and make sure I was OK. It didn't really feel like a celebration, so I was worried it was offside. You never know nowadays. So I wasn't sure what was going on, but I knew I hit it in."

Pulisic, after sideline treatment, stayed in the game until the end of the first half.

"It was a crazy kind of experience for me," he said. "Obviously, the emotions were running high, so I was doing everything I could to continue playing and it was all kind of a blur, to be honest."

Pulisic was taken to the hospital, where he watched the rest of the match on the phone of Harris Patel, one of the U.S. team's five trainers.

"It was like the hardest thing," Pulisic said. "They were checking my my blood sugar and everything and I was flying through the roof, but it wasn't because of anything. It was just me stressing, watching the game. But once I got through that and the final whistle blew, I was obviously very happy."

Pulisic was back at the U.S. team's luxury hotel on the Pearl before his teammates even returned. He expressed his confidence in them to get the job done without him.

"Honestly, this team helps me so much to take the pressure off of me," he said. "A couple of years ago, there were times maybe I felt like I needed to do more. But with these guys, I don't feel that way at all, to be honest. I know they have my back. I know when I went down, and I see Brenden [Aaronson] running onto the pitch, I'm not worried at all because I know these guys."

Pulisic's goal has been compared to Landon Donovan's last-second goal against Algeria in 2010. The winning goal in the final game of the group stage to advance the USA to the knockout round. An end-to-end play that finished with Pulisic, like Donovan, crashing the goal. Pulisic to finish off Dest's pass, Donovan to put away a rebound of Clint Dempsey's shot, Pulisic, unfortunately, with a knee to his abdomen.

Pulisic insisted, though, his goal wasn't his Landon Donovan moment.