England's Maguire back in fashion after troubled spell 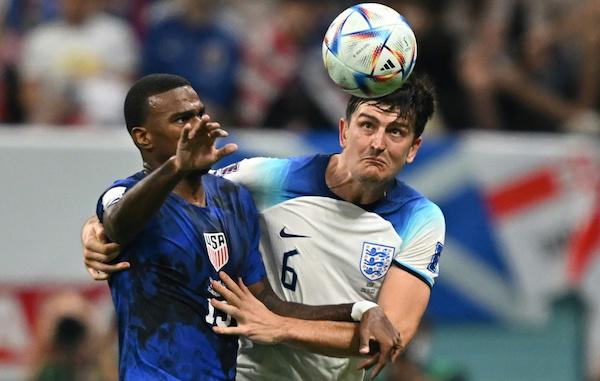 England defender Harry Maguire is finally silencing his critics as the much-maligned Manchester United defender enjoys a welcome renaissance at the World Cup.

Gareth Southgate's team heads into Sunday's last 16 showdown against Senegal with Maguire reestablished as a vital piece of their defense.

That scenario seemed improbable when Maguire arrived in Qatar with his reputation at a low ebb after a wretched run of form for both United and England.

The 29-year-old has started just five games in all competitions for United this season, with his handful of appearances often marred by more mistakes and miscues.

Maguire's England displays were hardly any more convincing this year and there were calls for Southgate to leave him out of the World Cup squad.

But Maguire has always been one of Southgate's most trusted players and the England manager's decision to keep faith with his center back paid dividends as it finished top of Group B.

Maguire was in commanding form as England kept shutouts in a 3-0 victory against Wales and a goalless draw with the United States, while he also provided a threat with his aerial prowess in the 6-2 win against Iran.

Former United and England defender Gary Neville was always confident Maguire would rediscover his best form at the World Cup because he seems most comfortable wearing the Three Lions shirt.

"I don't think I can think of a player playing better for their country than their club in my career. Harry Maguire plays better for his country than his club," Neville told Sky Sports.

"He feels better, feels at home, they've got a good group and a manager who believes in them and has selected them regularly."

As well as a barrage of abuse from frustrated United fans, Maguire even found himself out of favor with England supporters during his troubled spell.

He was booed ahead of a friendly against the Ivory Coast in March and again prior to the Nations League meeting with Germany in September.

That was an especially painful blow for a passionate England fan who once traveled to support his country at Euro 2016.

Maguire has also had the distraction of an appeal against a guilty verdict in a Greek court which will be heard on June 7 next year.

He was given a suspended jail sentence of 21 months and 10 days in 2020 after he was arrested following an alleged altercation in Mykonos.

In accordance with Greek law, the appeal nullified Maguire's conviction.

Yet, while the pressure of playing for United has sometimes seemed to weigh heavily on Maguire, for England he has largely been a reliable presence.

At Euro 2020, England kept five successive shutouts with Maguire at the heart of the defense.

Maguire was voted into the team of the tournament for his imposing displays during England's run to the final, where it suffered a heartbreaking penalty shootout defeat against Italy.

Neville is hopeful Maguire's return to form in Doha can help him get back in favor with United manager Erik ten Hag when the Premier League resumes on December 26.

"Harry is a good player and a good center back who has been brilliant at the last two tournaments. He's just had an awful time at United in the last 12 months," Neville said.

"United is a very unforgiving place, I know that from being there for 20 years. If something isn't right, that place can eat you alive, and Harry is just getting that at the moment. But I think he will come through it at United."

For now, Maguire's only focus is on writing an even more uplifting chapter in his redemption story as England aim to win the World Cup for the first time since 1966.