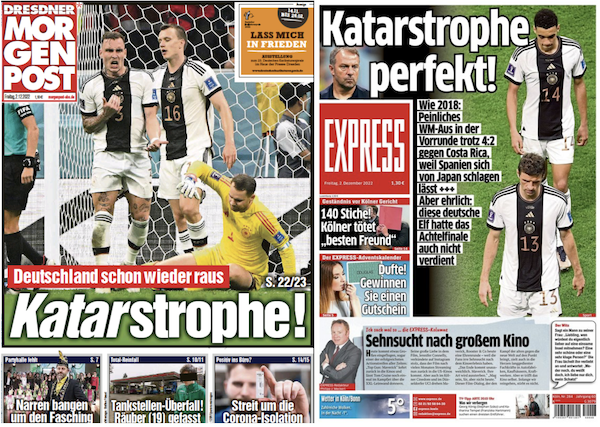 All eight groups have gone down to the wire, with the USA, Senegal, Australia, Japan and Switzerland hanging on to single-goal leads, South Korea scoring a nation-rousing stoppage time winner on the counterattack. Croatia survived by dint of squandered Belgian opportunities as the clock petered out, and Poland prayed as Mexico pushed for a third goal against Saudi Arabia. Mexico, like Uruguay, may have come to regret too much caution in their opening 0-0 game. Although try telling that to Serbia, which scored more goals (five) in Group G than the three teams that finished above them.

You wouldn't describe the standard of soccer as anything like 'world class.' It's been thrilling, but often hectic and scrappy too, with outbreaks of fatigue and tedium. Still, the across-the-board tension should prompt a re-think ahead of the 2026 tournament: keep the World Cup at 32 countries. Don't tinker with this nigh-on perfect format by adding too many mediocre teams, devaluing the competition, and ruining the thrills, twists and surprises of match day three.

Appealing to FIFA for common sense and what is best for soccer is almost certainly a waste of breath. In the meantime, while the format still allows, let's enjoy the falling giants and the rise of the soccer neo-nations, and be happy that we no longer start every tournament expecting either Germany or Brazil to be the winner.

The vast majority of the German public have seemed entirely indifferent to their country's fate in this World Cup. There have been virtually no banners or flags in apartment or car windows, or hanging from balconies. Sales of Panini stickers have been dire, according to my local news kiosk owner. Bars are not bothering to show the games (too expensive, no one's interested), and the players on the youth teams at my soccer club either didn't care, or didn't watch because their parents were boycotting the whole thing. Nonetheless, going out at the group phase has given us Germans the opportunity to do something we love above all — moaning. There will now be weeks, months and possibly years of dreary analysis about What Went Wrong, for the second World Cup running.

"Those 20 minutes against Japan" is one unsatisfactory answer. True, if the German defense had shown the concentration and iron mentality of old, then those two second-half Japanese goals in the opening game should never have happened. If their offensive players had finished off those multiple chances. So many ifs. If the Bayern Munich players played like they do when they're playing for Bayern Munich. Another if: if you're used to getting to the final and the semifinal on a regular basis, failure is really hard to take without a long, agonized dissection of the apparently decayed soccer corpse. 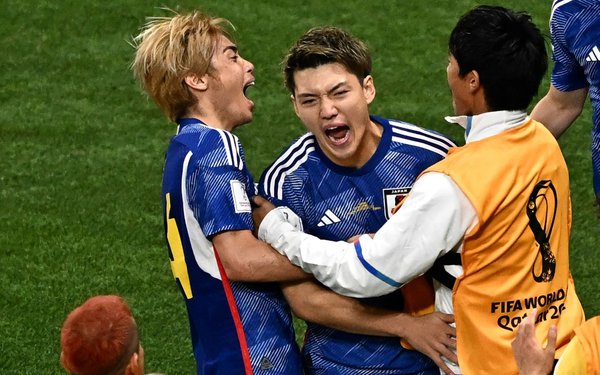 Yet it's the European leagues that have been the driving force behind soccer's globalization. Players from around the world are lured to the continent to help the biggest clubs compete, and usually end up improving themselves at the same time. Eight of Japan's squad play in the Bundesliga, including the two players who scored against Spain in the final group game. It's more than refreshing to see them alongside Morocco, Australia, the USA, South Korea and Senegal in the second round, and it would be even greater to see a team from outside Europe or South America lift the trophy. In contrast to the apathetic Germans, these countries have fans who loudly, madly delight in their teams' unaccustomed success.

Four-time winner Germany's been in the final eight times. Accept that the playing field is continuing to level out, and that change is good for the game. Also, fire Hansi Flick and fetch Jürgen Klopp. He looks like he could do with a new project, and fosters the necessary fire and character to re-kindle some love and enthusiasm for the German national team ahead of the Euro 24 championship they'll be hosting the summer after next.

Women referees at the World Cup. What took us so long?

Speaking of change, amid the drama of Group E's final 45 minutes it was barely noticed how well French referee Stephanie Frappart — the first ever woman to take charge of a men's World Cup game — was managing Germany against Costa Rica. And that's how it should be. Like changes to the goal kick and substitution rules, say, it's one of those rare positive developments where you can only wonder how it possibly took FIFA the best part of a century to catch on.

Of course, it wouldn't be FIFA if there wasn't a downside. After trumpeting the nomination of three central female referees before the tournament ("Look how fair and egalitarian we are at magnificent FIFA!"), they waited until the 43rd game before appointing one of them to lead an actual match. Like everything else, from beer sales to rainbow-patterned flags and items of clothing, perhaps soccer's governing body first had to clear it with the difficult, demanding host nation. "Under the guardianship system, women remained tied to their male guardian, usually their father, brother, grandfather or uncle, or for married women, to their husband," noted Amnesty International's 2021 report on Qatar. "Women continued to need their guardian’s permission for key life decisions to marry, study abroad on government scholarships, work in many government jobs, travel abroad until certain ages, and receive some forms of reproductive healthcare."

I hope that seeing Frappart call this game inspired millions of women worldwide to pick up a whistle, even if it was only to blast it in their guardian's ear.

While on the subject of being subject, some Iranian fans again had problems entering the stadium wearing T-shirts that proclaimed WOMEN, LIFE, FREEDOM, prior to their game against the USA. Which one of these concepts did the Qatari authorities have a problem with? The answer: all three. The country corrupted a handful of powerful, avaricious and morally unconscionable old men for the right to host this World Cup, so they're not about to let people express a demand for the most basic rights. Women? Keep them in check with a guardian (see above). Life? Not when it gets in the way of profitable building projects. Freedom? Please, respect our culture while you are here as our most welcome guests. And don't say, shout or display any words that threaten our inalienable right to absolute power and control over everything you say and do.

This column of course pays no heed to speculative rumors about unrest in the locker room. We shall therefore disregard the stories of counter-accusations in the Belgian camp about which player was too old to help his team win the World Cup. While laughing down our sleeves like a drain. Normally, it's the Dutch squad you can rely upon to implode through in-fighting, so talk of Belgian discontent is a new angle for monitors of World Cup roster unrest.

Like in a barren marriage, Belgium's players have perhaps just been together for too long, and now have grown apart. "Sorry, Kevin darling, I no longer feel like running on to your perfectly placed through balls. I just don't possess the energy I had in my 20s." A reconciliation trip to Canada could only patch over the problems. The second Moroccan honeymoon was a disaster. By the time they went to Croatia, they were no longer even talking. Coach Roberto Martinez walked straight out the door, and no one tried to stop him. Nobody's happy, but everyone's relieved that it's all finally over...

Give the A-teams a rest. And the rest of us too

Like the end of the group phase, despite all the drama. In fact, because of all the drama. 48 games in, and we're all exhausted. Not just with so many games, and all the cumulative hours of stoppage time, but with calculating all those vacillating permutations with points and goal difference and who plays who in the next round. I almost commissioned an intern just to fill in my wall-chart (sadly, they weren't willing to do it for free, and when I threatened to confiscate their passport they left the building). We need a rest just from watching it, so imagine how the players feel.

Argentina and Australia have rightly bemoaned the short, three-day gap between their final group game on Wednesday and their round of 16 match on Saturday (Spain and Morocco, by contrast, get five days rest). This tournament took over 12 years to fix and organize. Could we not have added a single day's rest between the group phase and the knockout round? For the sake of the teams, of course, but for everyone else too. I've got errands to run.

I'm notoriously bad at these, so I'll afford you the pleasure of watching me fail: