USA exits World Cup to a familiar feeling, a case of men against boys 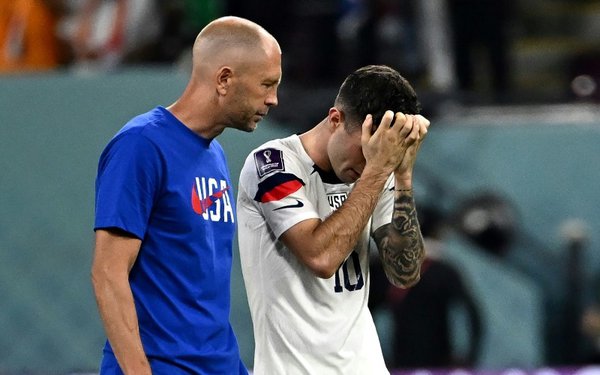 The end of each World Cup comes quickly and brutally.

The USA waited almost eight and half years to return to the finals, and it's going home after only 13 days.

Each World Cup has the same rhythm. Each extra day in the tournament is a chance to sell soccer to a wider American public. Interviews with players on the national morning shows. Fan shots at local bars on the local news. Then it stops. Almost always in the round of 16. This crazy World Cup, jammed into 29 days, is exceptionally short.

Just days after it was celebrated for its youth, the USA paid a heavy price for its naivety, conceding three goals on plays that each could have been drawn up on a schoolyard, and lost to the Netherlands, 3-1, in the round of 16.

The USA's ability to take control of the first halves of the three Group B matches was singled out in tactical analyses of the first round, but that organization only gets it so far. And will almost inevitably succumb to someone with better organization.

The USA's winning goal against Iran was an example of how to pick apart an opposing defense in retreat. The Dutch did that only better with a 22-pass sequence on Memphis Depay's opening goal, cutting the USA's general, Tyler Adams, out of the play.

Every time the USA exits the World Cup, the inevitable question is asked. Has there been progress?

"We didn't qualify for the last World Cup," said U.S. star Christian Pulisic, "and here we got to the last 16. We've definitely come a long way."

There's no argument there.

You could argue the USA's performance in Qatar was far better than it was in Brazil eight years ago when it showed nothing in its last two games, losses to Germany (1-0) and Belgium (2-1).

The players are better, so is the soccer.

The most encouraging part is the team's youth. The USA fielded the youngest team in the tournament for each of its four games. A corps of the team's seven or eight top players will be their prime in 2026 when the USA co-hosts the World Cup. And they will have four more years of experience in Europe's top leagues.

But better is still relative. It doesn't mean close. It doesn't change the fact that the USA is still far behind the top 10 or so soccer nations in the world, depending on the cycle. It lost on Saturday to a team whose coach said it didn't play particularly well.

"We suffered so much as we were dispossessed," Dutch coach Louis van Gaal said of the first half that ended with a 2-0 Oranje lead, "so often early on and that is not acceptable at a World Cup. If you play top-notch countries, it is not acceptable."

Sure, the soccer world is getting smaller. No team was perfect in the group stage of the World Cup for the first time since 1994. Many of the giants or supposed giants lost. Defending champion France to Tunisia. Argentina to Saudi Arabia. Brazil to Cameroon. Spain and Germany to Japan. Belgium to Morocco.

In the aftermath of the USA's exit to the Dutch, it was easy to find excuses:

• Pulisic should have scored on his chance in the 3rd minute.
• Berhalter should have gone with Gio Reyna at center forward from the get-go.

"We talked about the game being about moments and the first half was a great indication of that," said Berhalter. "And two moments come and all of a sudden we're down 2-0."

Sure, a case could be made the Dutch won because they finished their chances and the USA didn't.

"When you look at the difference of the two teams, there was some offensive finishing quality that Holland had that we were lacking," Berhalter said. "It's normal. We have a very young group that is beginning their careers. We'll catch up to that."

Probably the most frustrating thing about the USA's return to the World Cup is that it's been going to the finals for decades now and almost inevitably the overwhelming sense is that when it exited it felt like a case of men against boys.