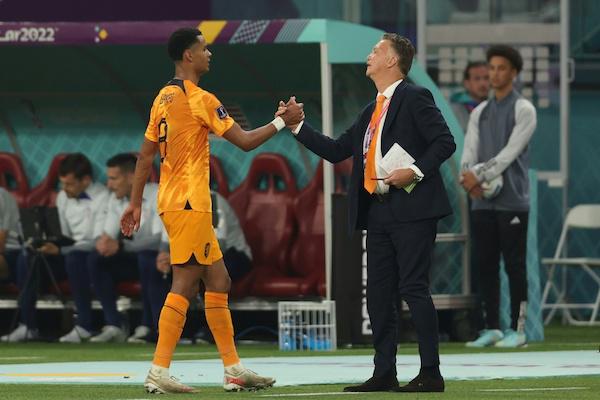 Louis van Gaal's Netherlands has been repeatedly criticized for being "too boring" but a clinical counterattacking display on Saturday saw them pick off the United States to reach the quarterfinals of the World Cup. The veteran coach suggested a reporter should "go home" if he thought the Dutch were not entertaining enough after a 2-0 win over Qatar in the group stage.

The Netherlands' 3-1 victory on Saturday will silence some of the critics, with many of Van Gaal's big decisions paying off.

His side sat back in the first half against the USA and cut through them with a wonderful move of 20 passes to score the opening goal by Memphis Depay, exposing the wide spaces left in behind the American defense.

"It was a great goal. ... It was the perfect goal I think," said midfielder Davy Klaassen.

When Daley Blind swept home their second shot on target on the stroke of halftime, the United States had a mountain to climb.

Haji Wright pulled one back late on, but the Netherlands, who did not qualify in 2018 but have only conceded six goals in 11 World Cup games under Van Gaal, secured progression through Denzel Dumfries.

In truth, a comeback was never likely against the well organized Netherlands, traditionally known for expansive soccer.

"Of course we want to (play in a 'Dutch style'), but in the end you want to win and this is the most important (thing)," added Klaassen.

Van Gaal took over for a third time last year to lead the Netherlands until the end of this tournament and remains unbeaten excluding penalties at World Cups.

He earned plenty of praise in 2014 when his team finished third, beating hosts Brazil after losing on penalties to Argentina in the semifinals.

That team had shutouts in both those games and the quarterfinal shootout victory over Costa Rica was led by Van Gaal, who moved to Manchester United after the World Cup.

"We're unbeaten with him so definitely big credit to him," said captain Virgil van Dijk. "He's been very good for Dutch soccer."

The 71-year-old has been under pressure in Qatar, though, since declaring the Oranje are targeting becoming world champion for the first time.

One reporter put it to Van Gaal that fans were "grinding their teeth" on social media about perceived drab performances.

Marshalled by Van Dijk and Nathan Ake, the Dutch have been hard to break down.

Giant goalkeeper Andries Noppert has impressed when called upon since being given his international debut by Van Gaal in the opening win over Senegal.

"I get enough appreciation from the people surrounding me, I know what the media will say about me — they don't always report in a positive way. That's a given in soccer," said Van Gaal.

With Depay fit to start after only being used as a substitute in the first two matches, the Netherlands appear primed to go even further ahead of their last-eight tie against Argentina next Friday at Lusail Stadium.

The USA enjoyed the majority of possession at Khalifa International Stadium but always struggled to create chances more than their opponents.

The comfortable nature of the victory even allowed Van Gaal to rest Depay and Ake late on in a day when almost everything went right for him.

"He's Louis van Gaal and he never changes. What you see is what you get," said wing back Blind.

"He's a great personality and we're very happy that he's with us."