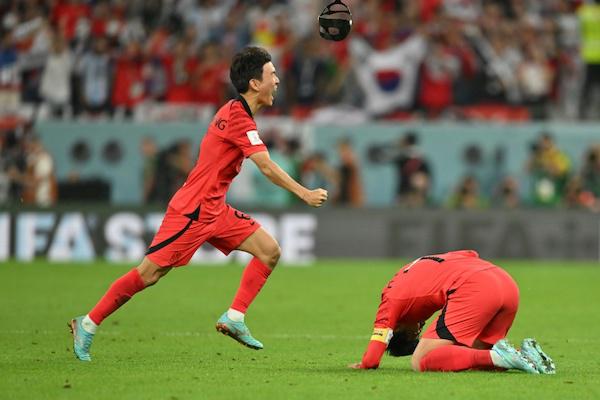 Son Heung-min wants his South Korea team to pull off "another miracle" and beat Brazil on Monday in the World Cup last 16 after their last-gasp heroics against Portugal.

The Koreans' tournament looked to be over until substitute Hwang Hee-chan popped up in stoppage to score the winner in a 2-1 victory over already qualified Portugal on Friday in Qatar.

That propeled them into the knockout rounds and a daunting date with Brazil, one of the pre-tournament favourites.

But captain Son, who has been playing in a mask following surgery last month for a fracture around his left eye, said they are not ready to go home just yet.

After what has been a tournament of surprises, the Koreans now want to pull off another one.

"This is great but our tournament is not over," Spurs attacker Son said following the emotions of the dramatic win over Portugal.

"We've always talked about reaching the round of 16 as our objective but we should now try to go beyond that," Son, who shed tears of joy, told Korean media in Doha.

"I hope we can script another miracle," he added, having set up Hwang with a searing run and threaded pass through the legs of a Portuguese defender.

Some in South Korea are beginning to draw parallels with the national team of 2002 who stunned the world as co-hosts by reaching the semifinals.

Current assistant coach Sergio Costa, who took charge from the sidelines for the Group H clash with Portugal because coach Paulo Bento was suspended, resisted such talk.

"I cannot compare because I watched the World Cup in 2002 on TV and didn't know them personally," said Sergio Costa, having masterminded the win over his native Portugal in his boss's absence.

"I've seen a few games from the past but I cannot make a comparison because I didn't know the Korean team back then.

"I can tell you what it is now — it's a team that is very honest.

"That is something that we are very proud of, we see those players with a strong personality and they deserve what we have accomplished," he added.