Croatia's squad features only a few of the players which led them to the World Cup final in 2018, runners-up to France, but Luka Modric is defying time to be one of those few constants.

The 37-year-old Real Madrid midfielder worked tirelessly across the full 90 minutes of the 0-0 draw with Belgium on Thursday to book Croatia's place in the last 16, where it faces Japan on Monday.

The captain leads by example, showing the younger players what is possible and how much effort achieving it takes.

If the 2018 Ballon d'Or winner, with five Champions League titles to his name, still toils selflessly in midfield, there can be no excuses for anyone else not to follow suit.

"In my tank, my reservoir (of gas) is full," the Celtic defender told a press conference Saturday. "It is a World Cup -- we may only get (to be part of) this once in our lifetime. I can't wait for the game to start. When you see people like Luka Modric running and dying on the pitch, it gives us younger players extra energy to run. We have a great combination of experience and younger players in the team." 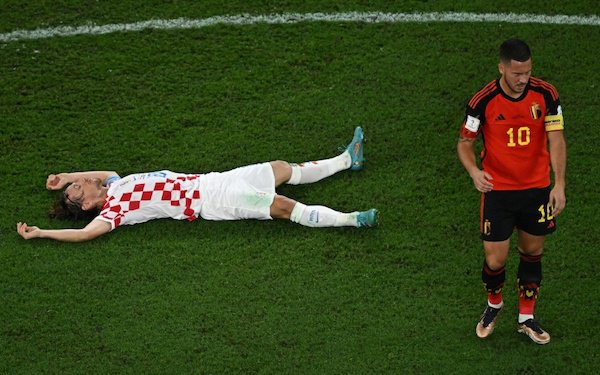 Croatia finished second in Group F and Juranovic, 27, played 90 minutes in all three games, while Modric also played 90 minutes against Morocco in the goalless opener, and 86 against Canada, in the team's thumping 4-1 win. In the Belgium and Morocco games, Modric was awarded man of the match.

Even though some of his contributions are subtle, and thankless at times, they have been rewarded in Qatar, not that his team-mates need any reminders of his quality.

Asked about Croatia's winning mentality, midfielder Lovro Majer said it was innate, but also down to older players like Modric offering years of experience to the team.

"We have a winning mentality in our blood," said Majer on Saturday. "I think we have an excellent mix of experienced players who have done excellent things in their careers and younger players with new energy. A combination of something that's innate and that mix of experience and youth."

Sitting beside him at Croatia's training hub in Doha, Juranovic agreed.

"When you have world class players playing at the highest level for 10 years, that helps a lot, so we believe we can turn around any situation on the pitch," said the defender.

Modric is among the tournaments best passers, driving Croatia up the pitch with clever balls, while maintaining his defensive discipline.

The former Tottenham player has made several important interceptions, presses well and is also capable of deciding when to drop deeper alongside Marcelo Brozovic.

Perhaps what helps keep Modric running, fighting and competing at an elite level is his mindset.

The midfielder spoke to reporters at the start of the tournament and said the glory of reaching the final four years ago in Moscow was irrelevant now.

"Whatever we've been through during the 2018 World Cup was an unforgettable experience but we need to put it aside and focus on what is ahead of us," said Modric. "Many players from Russia are not here. We have new players, fresh blood and new energy. We also have some veteran players who have helped the young ones adjust. This is a new tournament and we have to look at it this way."

Since gaining independence in 1991, Croatia have only missed the 2010 tournament in South Africa. In 1998, they went on a surprise run to the semifinals, where they were beaten by France. Les Bleus were again their executioners in 2018, and if they face France in this tournament, it would mean they have reached the final.

Modric will have to cover a lot more ground before that can happen, starting against Japan on Monday.