Magical Mbappe: 'This World Cup is an obsession for me' 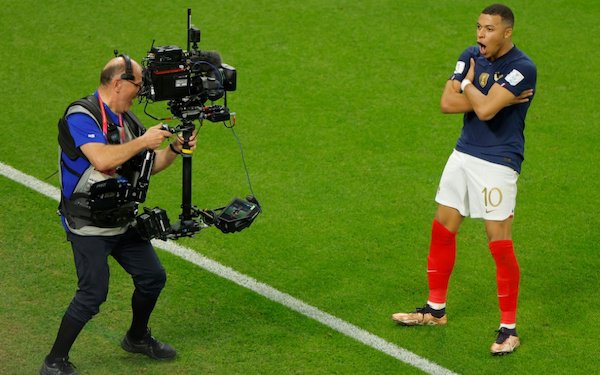 Kylian Mbappe says he dreamed of winning the World Cup for a second time after his two goals and an assist helped France to a 3-1 win over Poland which advanced the holders to the quarterfinals in Qatar.

"Of course, this World Cup is an obsession for me, it's the competition of my dreams," said the 23-year-old who burst onto the global stage by starring when France won the title in Russia four years ago. I have built my season around this competition and around being ready both physically and mentally for it. I wanted to come here ready and so far things are going well, but we are still a long way from the objective we set and that I set."

The Paris Saint-Germain superstar now has five goals in just four games at the tournament and is already France's second-top scorer ever at the World Cup with nine goals in 11 appearances overall. Only Just Fontaine, who scored an incredible 13 times at the 1958 tournament in Sweden, has more World Cup goals for France.

However Mbappe insisted he was not bothered about the prospect of winning the Golden Ball for the tournament's best player.

"The only objective for me is to win the World Cup which means now to win the quarterfinal," said Mbappe, who also set up the opening goal against Poland for Olivier Giroud. "That is what I am dreaming of. I didn't come here to win the Golden Ball. That is not why I am here. I am here to win and help the French national team."

He had been named man of the match in France's opening two wins over Australia and Denmark only to shun his post-match media duties, exposing the French Football Federation to a fine from FIFA as a result.

However, this time he showed up to speak to reporters.

"There were lots of people wondering why I was not speaking, but it was nothing personal against the journalists," he said "I just needed to concentrate on my competition and when I need to focus it needs to be at 100 percent. I can't lose energy on other things. That is why I didn't speak before. I have learnt that the federation is going to get a fine, but I have promised personally to pay it."

Poland kept the match even until Mbappe set up Giroud to put the lively Bleus ahead in the 38th minute.

It was a nighf for records. In addition to Giroud's record-breaking goal, goalkeeper and captain Hugo Lloris won his 142nd cap, equaling the record for most France appearances, held by Lilian Thuram, whose son Marcus came off the bench against Poland and helped set up Mbappe's second goal.

It was a history-making occasion for France but what Deschamps wanted above all was a routine victory and progression to the last eight.
The sky should be the limit for a French side led by Mbappe, but it is not just him.

"It wasn't easy because Poland were well organized and tried to counter us," France coach Didier Deschamps told broadcaster TF1. "Then there is Kylian with his ability to resolve all sorts of problems, and that's just as well for us. This team has been united from the beginning and obviously a result like this one confirms that. The joy is shared among everyone."

France was the overwhelming favorite against a Poland team that limped through the group stage and has not won a World Cup knockout match since 1982 when it finished third, beating France in the consolation match.

"We got out of the group stage for the first time since 1986. That was our main objective," said Poland coach Czeslaw Michniewicz.

But he added: "There is no recipe to stop Mbappe in the form that he is in right now."

world cup
1 comment about "Magical Mbappe: 'This World Cup is an obsession for me'".
Next story loading