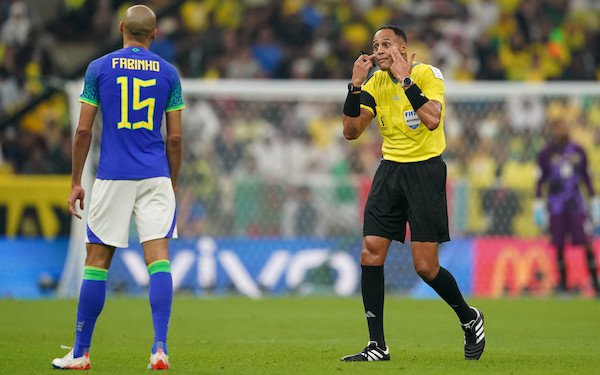 Forty-eight games were played at the group stage. I watched a good number of them but not all the games. I wanted to share my observations for the officiating. After the World Cup, I will share my thoughts on the complete process.

Referee and VAR Assignments.
FIFA invited 36 referees from 32 countries, three of whom were women referees. FIFA also invited 69 assistant referees and 24 VARs. There are a total of 64 games in the World Cup, so 36 referees seems like a reasonable number.

There are 24 VARs from 18 countries, 11 of whom are from UEFA. What is interesting is that there is not as single VAR from England, which I believe shows FIFA’s discontent with the VAR application by PGMOL, the English equivalent of PRO. The other 13 VARs come from four confederations (Conmebol 5, Concacaf 3, AFC 2 and CAF 2, both from Morocco). In 2018, there were only 13 VAR officials from three confederations (UEFA 9, Conmebol 3 and AFC 1).

Referee Performances.
Since referee performance is a subjective issue, before giving my personal subjective assessment, I would like to share some objective criteria. Out of the nine referees who had a single assignment – except Pole Szymon Marciniak, who had a second in the knockout round – the distribution based on the confederations seemed even. Unless they get another assignment in the knockout stage – which seems unlikely – we can say that these nine referees did not meet the standards of FIFA.

There were 164 yellow cards in 48 games an average of 3.41 cards per game and only two red cards (one for a second yellow card and one for straight red card) if you exclude the red card shown to the South Korean head coach Paulo Bento after the game was over. The red card per game average is 0.042.  I do not remember a game that I watched that warranted a red card that was missed by the referee or the VAR. Although those averages might change toward the end of the World Cup 2022, the World Cup 2018 yellow card per game average was 3.42 and it was 0.06 for red cards. The numbers are pretty much very similar in the last two World Cups. Based on CIES analysis in 2020  in the world “on average, referees handed out 4.42 yellow and 0.25 red cards per match for the 101,491 fixtures analyzed in the 87 leagues taken into account.” So, in the World Cup 2018 and 2022 averages are lower in both yellow cards and red cards — but especially in red cards compared to the numbers around the globe.

In the 2006 World Cup, there were 345 yellow cards (5.53) and 28 (0.44) red cards. There seems to be a drop for the yellow cards and red cards over the years. One of the reasons is the use of VAR, which discourages players, especially for off the ball violent conduct fouls. The other one is the change in the philosophy of officiating at this highest level. FIFA wants to keep the players on the field as much as possible. Their new philosophy “minimum cards, maximum game control” is in a way like the VAR motto of “minimum interference, maximum benefit.” If you observe the games carefully and the ensuing assignments, you can understand the importance FIFA gives to body language and proper communication with players along with the use of cards when necessary.

I will support this conjecture with two anecdotal examples. Let me point out that I realize some of the political aspects of referee assignments in the World Cup.

Ismail Elfath (photo), the American referee, had three key match incident (KMI) decisions in the game between Ghana and Portugal. All three were supportable but very questionable decisions. Still he had no issue with his game control and great respect from the players due to his excellent communication skills, correct use of body language and exceptional demeanor. Needless to say, his posture helps him also. After this game, he got more assignments and managed both extremely well with very few cards. Especially watch how he shows the second yellow card to Vincent Abubakar of Cameroon after he scores a goal against Brazil in the dying minutes of the game to understand my point.

On the other hand, the Qatari referee Abdulrahman Al-Jassim had no questionable KMIs in the game between USA and Wales. But he had no respect from players and the players dissented constantly. The only reason was the fact that he had inadequate communication skills as well as very frantic and panicky body language. He did not receive any other assignments even although he is from the host nation.

There were 14 penalty kicks awarded in the group stage an average of 0.29 per game, that is a sharp drop from World Cup 2018 when the average was 0.45 per game. (I am comparing the World Cups where the VAR was utilized for comparison. It is clear the message from Euro 2020 not to award “soft penalty kicks” permeated into WC 2022.)

There were few referee mobbing incidents — except the awful scenes at the end of Uruguay-Ghana game — or manifestations of gross dissent to referee decisions during the first 48 games. I am sure FIFA will deal with the culprits on the most appropriate manner.

Let me say a few things that are subjective in nature.

Pierluigi Collina, the FIFA referee chief, said before the WC started “it would be a shame if some of these players wouldn’t be able to play due to an injury caused by an opponent. So, the first message to our referees is to protect the players’ safety. Whenever there is something that may endanger the safety of players, coaches should expect the strongest disciplinary sanction, which is a red card.”

The referees did protect Neymar, Lionel Messi and Cristiano Ronaldo but yellow cards and red cards did not increase as expected. Orsato’s handling of the first game was a message to the teams and it was strategic in nature.

There were a number of questionable penalty kicks awarded as well as a number as well a number of yellow cards that should have been issued. But overall so far the general standard of refereeing is a bit lower than World Cup 2018 but still very good.

The only incident that is not excusable was a blatant misapplication of the "Laws of the Game" during the match between Tunisia and France. Tunisia was leading the game 1-0. At 90+ minutes, Antoine Griezmann scored an equalizing goal for France. The referee from New Zealand, Matthew Conger, awarded the goal and the game was restarted with a kickoff. Right after whistle for the kickoff, he ended the game. Then VAR intervened, telling him that Griezmann was in an offside position and interfered with the opponents. Conger disallowed the call.

The FIFA rulebook is very clear:

”Reviews after play has restarted: If play has stopped and restarted, the referee may only undertake a ‘review,’ and take the appropriate disciplinary sanction, for mistaken identity or for a potential sending-off offense relating to violent conduct, spitting, biting or extremely offensive, insulting and/or abusive action(s)” and “ The referee may not change a restart decision on realizing that it is incorrect or on the advice of another match official if play has restarted.” After the kickoff whistle, a referee cannot reverse his decision because the game has restarted.

Clearly, this was a misapplication of the rulebook, but since a tie by France or a loss does not change the group ordering, FIFA rejected the appeal by France. Otherwise, hell would have broken loose.