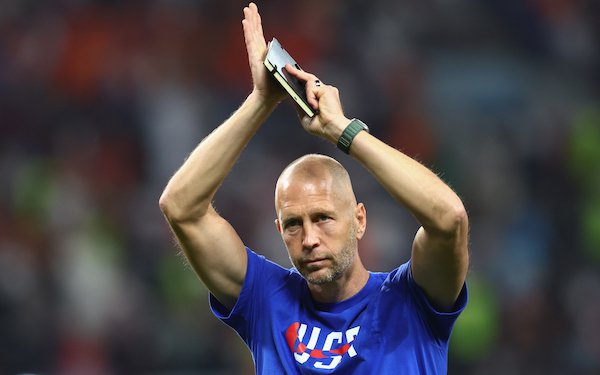 A report by ESPN's Jeff Carlisle about U.S. national team Gregg Berhalter on Wednesday set off new hysteria on the little world of soccer Twitter:

The part about new contract talks is what got people going.

I'd started by asking, would anyone in Berhalter's position do anything differently? The same for his federation bosses. Feel each other out? See what the market bears?

Do I think Berhalter did a good job over the last four years of rebuilding the USMNT program?

He'll probably never get enough credit for building a strong culture within the team and guiding his young players through the early parts of their careers until long after he leaves. Probably the only more underappreciated coach in the history of the men's national team is Lothar Osiander and what he did in 1986-88.

Did the USMNT meet expectations at the 2022 World Cup? Yes, by any reasonable standard, it did just fine.

But those expectations will ramp up wildly for 2026 when the USA is co-host. At a minimum, quarterfinal or bust.

Should Berhalter be the coach to take the USA to the 2026 World Cup?

1. As much as Berhalter has laid the groundwork for what comes next with the USMNT, he should move on. He was a member of the 2002 and 2006 World Cup teams and should know as well as anyone the difficulties U.S. head coaches have had in their second cycles. That camaraderie and bond — his players call it a "brotherhood" — Berhalter worked so hard to foster only lasts so long in the same way.

2. Pick anyone to succeed Berhalter -- any big-name club coach like Pep Guardiola or Jurgen Klopp or a national team coach like Joachim Loew or Didier Deschamps, who both won World Cup titles in their second cycles with their teams -- and there's no guarantee that the new coach will do any better than him in 2026.

I'd go further and say most of what will impact the USA's success the next time around will be beyond the control of the national team coach.

First and foremost, it will be how the core of stars do in Europe.

It cannot be overstated how important was the big-game experience of the players Berhalter started in the deciding group stage match against Iran — nine players on clubs in big five European leagues and six with Champions League experience.

The next World Cup will come quickly — it's almost only three and a half years away. What that means is the decisions Christian Pulisic and his U.S. teammates getting renewed attention on the transfer market make now about their next moves will be huge because in most cases they will take them right up to 2026.

One thing Berhalter or his successor will have to come to terms with is the current limitation of the U.S. player pool. Are there any young dominating center backs with great ball skills out there right now? Or as Berhalter pointed out and was mercilessly pillared for misstating his background, a goalscorer like Memphis Depay?  What you see is what you get in terms of players just breaking into MLS teams or starting out in Europe.

What can be done, though, is accelerate both their international experience and showcase their talent for the player market is make sure every available player is released for the 2023 Under-20 World Cup and 2024 Olympics.

Probably the most important single U.S. national team experience of the last five years in the run-up to Qatar 2022 was Tab Ramos' 2019 U.S. U-20 World Cup quarterfinal team that produced two 2022 World Cup starters — Sergino Dest and Tim Weah — and might have produced a third if Chris Richards had not been hurt. Dest went from the U-20s to breaking into the Ajax starting lineup in preseason camp a month later and soon committed to the USA. Weah made it a point to play for the U-20s, and he soon made a $10 million move from PSG to Lille.

The U.S. men's national team program has been presented with a unique opportunity of knowing now it has qualified teams for the 2023 Under-20 World Cup and 2024 Olympics. There's no guarantee that clubs will accede to the federation's requests to release players, but building for the 2026 World Cup is a mighty incentive to send the best Olympic men's soccer team ever assembled to Paris in 2024.

men's national team
40 comments about "World Cup 2026 success and the limitations of the next USMNT coach".