Unique coaching education at the World Cup in Qatar 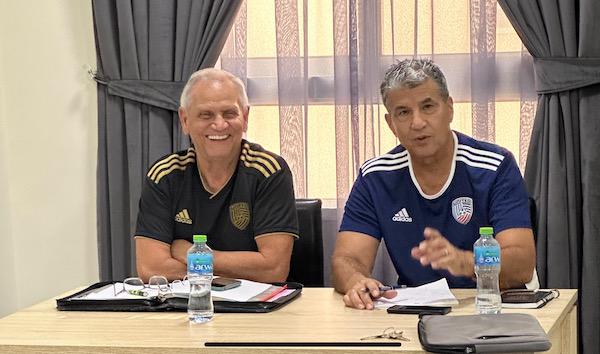 “When you go to a game live, you see the whole field – you see what you want to see vs. what the TV camera wants to show you."

The USA's assistant coach Luchi Gonzalez, former U.S. head coaches Steve Sampson and Jurgen Klinsmann, and Dario Sala, Tata Martino's former assistant, were among the special guests during a coaching education expedition attended by 40 coaches and administrators from the USA in Qatar during the group stage of the World Cup.

“At our welcome meeting the first day, I asked for a show of hands — has anyone been to the Middle East,” said Jeremy Parkins, the COO of Generation adidas International, which with United Soccer Coaches organized the on-site World Cup coaching class.  “No one raised their hand. It’s something they are always going to remember.”

The syllabus included England's three Group B games (plus others available for purchase) as part of the package that featured daily coaching education sessions led by Schellas Hyndman, Ralph Perez (top photo L-to-R) and the special guests.

“We have Ralph and me sharing our ideas for 45 minutes to an hour daily with coaches about the games, tactics, match analysis,” said Hyndman, the 2010 MLS Coach of the Year with FC Dallas. “And we make them all feel valuable. We don’t talk down to the coaches but ask them to share their thoughts and make sure they all know that we’re always available.”

Coaches could take a short walk down the hall to join Hyndman and Perez watch and evaluate a match in their apartment. Every apartment was replete with large-screen televisions, all tuned to beIN and their 24/7 coverage – an education unto itself.

“This has been a wonderful opportunity for these coaches and for Ralph and me,” said Hyndman who drafted U.S. men’s national team back Walker Zimmerman out of Furman for  FC Dallas in 2013.

Perez worked under Iran coach Carlos Queiroz at the NY/NJ MetroStars (now the Red Bulls) of MLS and asserted the Portuguese national is a tactical genius.

“He knows how to organize a team in a classroom setting and on the field,” said Perez, who has led the University of Redlands the past 16 seasons. “The players knew their roles and functions in each position – something coaches can learn from.”

“When you go to a game live you see the whole field – you see what you want to see vs. what the TV camera wants to show you,” said Perez, who was Bob Gansler’s assistant at the 1990 World Cup in Italy. “Secondly, you’re inundated with coaches and fans and the ambiance of the World Cup. You’re talking, living and breathing soccer wherever you go and caught up in the teams and the fans supporting their teams.” 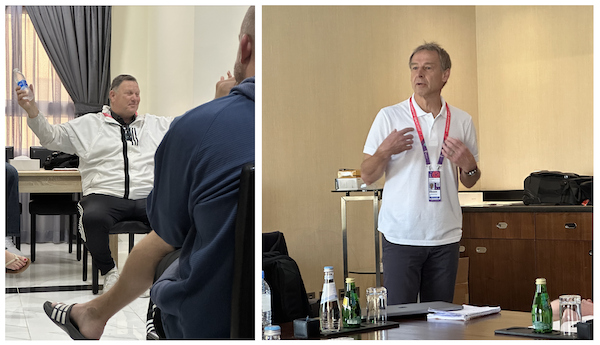 “There’s nothing that compares to the World Cup – in any sport,” said Hyndman whose World Cup connections include Jesus Ferreira. Hyndman coached David Ferreira (Jesus’ father) when the Colombia earned MLS Player of the Year honors in 2010. David Ferreira scored the lone goal in a 2-1 loss in the MLS Cup final to Colorado.

“Coming to the World Cup gives you an opportunity to come out of our bubble,” said AYSO United National Director, Dave Thomas. “What I’ve appreciated the most is how much this game means to so many people. Sometimes we forget and get caught up in the tactics and nuances that makes the game what it is to us as professionals in the industry.”

“What a wonderful privilege to see the evolution of American soccer not only from the fans standpoint — Sam’s Army and the American Outlaws – but especially the coaching,” said Holland, a Southwest Airlines flight attendant. “On this trip, I’ve learned a lot from the coaches and having these guests come meet with us sparked conversations with my peers. All of us see the game differently from one coach to the next.”

The guest speakers on the trip included another past player for Hyndman from his SMU days – U.S. assistant Luchi Gonzalez, who addressed the troops on the day prior to the USA's victory over Iran.

Gonzalez was the Academy Director at FC Dallas for seven years before taking over as first team coach.

“It’s part of his core,” said Balzirini who coached U.S. back Joe Scally’s brother and sister and often visited the family’s soccer store in Smithtown, New York. “It resonates with me being in the youth game, what the focus of our job is and what the end goal is — developing them as players and people. To hear a guy at that level still talking about development was impressive to me.”

“I liked the breakdown of things that Saudi Arabia did to beat Argentina in the meeting with Dario,” said Lindsay Schartner who completed her eighth season as head boys coach at West Morris Mendham High School in New Jersey. “And the challenges to coach a global superstar like Messi.”

The guest list also included a pair of former U.S. head coaches, Steve Sampson and Jurgen Klinsmann. Sampson has been providing Spanish radio commentary on while Klinsmann is a part of Arsene Wenger’s FIFA Technical Committee.

Klinsmann, who won a World Cup as a player with West Germany and coached both Germany and the U.S. in this quadrennial event, invited the coaches into Control Center for the Technical Committee, a large conference room with multiple video stations and white boards to provide specific analysis of players and teams that are shared on a FIFA web site.

He described the important blend of interactions between himself, doing the eye test live at matches, and the data analysts who are compiling their own conclusions.

“I thought the relationship that data analysts and the coaches have here was really intriguing,” said Schartner. “Between analyzing the data and what you’re seeing on the field. There’s going to be things that you’re missing. Having maybe a system to develop personally for your own could be beneficial.”

“The interesting part for me was hearing Klinsmann’s explanation behind the data,” said Balzirini. “Like the length of passes and the teams being more direct because it’s a World Cup like no other with so little time to prepare. Getting inside the head of one of FIFA’s top 100 players of all-time — that was off the charts.” 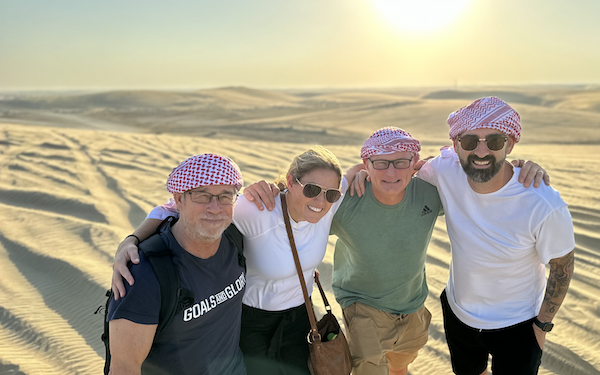 At times on the trip, it was the peer interactions that provided a spark.

“My biggest takeaway is the conversations we’ve had for the 10 days that we’ve been here – the incredible soccer IQ that I’ve been surrounded by,” said Schartner. “Last night we sat around and just put out practice plans just to see how each of us tweak certain things. And a lot of conversations about culture and how to handle situations.”

Schartner, Thomas, Holland and the author were able to divert their attention from soccer one afternoon when a tour company was commissioned for a desert safari of camel riding, falcon viewing, sandboarding and a stroll along the Persian Gulf.

All part of a sojourn to the Middle East amidst a 32-team competition seen by billions across the planet.

“At the end of the day it’s the world’s game and you get to experience it with people from all over the globe.” said Thomas. “That’s what’s been so meaningful - falling back in love with the World Cup and the game of soccer.”

(Glenn Crooks, is a radio commentator for New York City FC and host of the SiriusXM FC program, “The Coaching Academy.” He is the former head women’s coach at Rutgers University and the Players Development Academy in New Jersey. A three-time NJ ODP National Championship coach, he is a member of the New Jersey Youth Soccer Hall of Fame.)