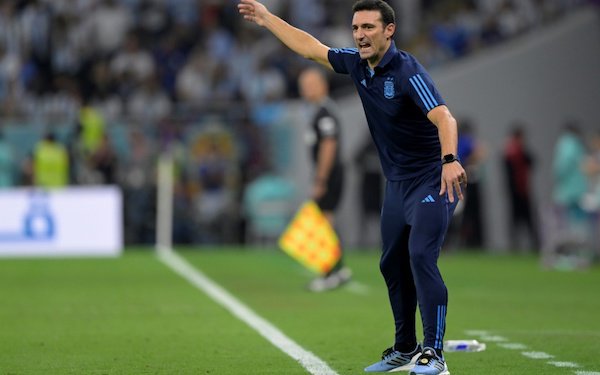 Argentina's Lionel Scaloni is the youngest coach at this World Cup, but the 44-year-old intends to prove his relative inexperience is no obstacle against Louis van Gaal and the Netherlands in Friday's quarter-final.

Having witnessed first-hand Argentina's World Cup campaign unravel in 2018 as the assistant to Jorge Sampaoli, Scaloni was not an obvious choice to take over the top job in the wake of a last-16 exit.

Without any previous senior head coach experience, Scaloni was initially appointed on an interim basis as the Argentine federation searched for Sampaoli's successor, but he eventually earned a permanent deal -- recently extended to 2026.

He brushed off the disapproval from those who felt he lacked the qualifications to lead the two-time world champions, but Scaloni also had to win over the trust of the players.

Scaloni did just that by helping end Argentina's 28-year trophy drought with victory at the 2021 Copa America after a 1-0 win over hosts Brazil in the final. He succeeded where the likes of Daniel Passarella, Marcelo Bielsa, Alejandro Sabella and Gerardo Martino did not, without also forgetting Diego Maradona's colorful, but unfruitful two-year spell in charge.

"At first there was mistrust," midfielder Rodrigo De Paul said after the Copa America triumph. "Now Scaloni could convince us of anything."

Argentina touched down in Qatar among the favorites for the title and with a 36-match unbeaten run.

A shock opening defeat by Saudi Arabia could have spelled disaster and marked a sad farewell for one of the game's all-time greats, Lionel Messi, at his final World Cup. Instead, Scaloni called for calm and dispelled any worries. "We'll pick ourselves up and win the (next) two games," he said.

Argentina indeed resurrected its World Cup bid with 2-0 wins over Mexico and Poland to advance top of its group. It went on to beat Australia 2-1 in the last 16.

Awaiting Scaloni and Argentina next is a Dutch side led by a coach he already idolized when he was still a player.

"I was at Deportivo La Coruna when he was Barcelona coach and he was already an leading figure, I'm proud to take him on, everyone knows what he's done for football," said Scaloni of the 71-year-old Van Gaal, the oldest coach at this tournament.

Scaloni was actually part of the Deportivo side that pipped Van Gaal's Barcelona to the Spanish league title in 2000. He also had a brief spell with West Ham and played in the 2006 FA Cup final, which a Liverpool team inspired side by Steven Gerrard won on penalties.

The former fullback was capped seven times by Argentina and featured once at the 2006 World Cup, where he was teammates with a teenage Messi.

In Qatar, with the seven-time Ballon d'Or winner now 35, it's been a roller coaster of emotions for Argentina in their quest for a third World Cup title, and first since 1986. After the loss to Saudi Arabia, assistant coach Pablo Aimar was on the brink of tears during the win over Mexico. Scaloni emphasized the need for some perspective.

"You have to have some common sense, it's just a football match," he said. "I received a message from my brother saying he was crying and it can't be like that. It's as if it were more than a football match. I don't share that. The players must understand it's a football match. If not, it will be like this in every match. It's hard to make people understand that the sun will rise tomorrow, win or lose. What matters is how you do things."

Scaloni's coaching achievements are dwarfed by those of Van Gaal, who has spent four decades in management at some of Europe's biggest clubs, but he hopes for a similar outcome to the one from when the two nations met in the semi-finals eight years ago.

Argentina beat Van Gaal's Netherlands on penalties after a 0-0 draw in Sao Paulo, only to lose the final against Germany.

"It's not as brilliant as previous Dutch teams, but they are very clear on what they do," said Scaloni. "It will be a great match between two historic teams. One will be knocked out, we hope we go through."