Brazil draws comparisons to very best teams of past 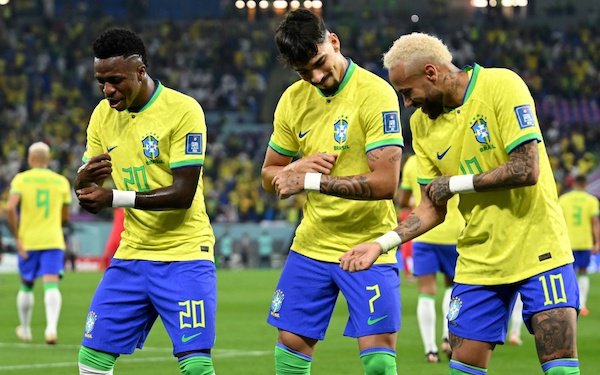 Brazil heads into Friday's World Cup quarterfinal against Croatia brimming with confidence after Neymar's return inspired a performance laced with swagger and arrogance in the last 16.

Their eye-catching 4-1 victory against South Korea, which featured goals by Vinicius Junior, Richarlison and Lucas Paqueta as well as a Neymar penalty, sent out an ominous message to their rivals in Qatar.

The soccer, for 45 minutes at least, was free-flowing and full of joy, the players celebrating their goals by showing off their dance moves and even getting Tite, their 61-year-old coach, to join in.

So thrilling were the Selecao at Doha's Stadium 974 that their performance drew comparisons in some quarters with the very best and most entertaining Brazil sides, from the 1970 team of Pele to the 1982 vintage led by Socrates.

Yet it was just one game, and it came after the five-time champions scored just three goals in three group matches and also lost to Cameroon, their first defeat in the opening round at a World Cup since 1998.

Brazil will surely settle for a simple victory when it takes on 2018 runners-up Croatia at Education City Stadium, mindful of results at recent World Cups.

Since it won their fifth title in 2002, Brazil has gone out each time to European opponents, including a 7-1 humiliation at the hands of Germany on home soil in 2014 and a defeat by Belgium four years ago in Russia.

"We are dreaming of winning the title, that's obvious, but we have to go step by step," Neymar said after the victory over South Korea. "This was the fourth game. There are three to go but we are prepared. Our minds are focused on winning the title."

Neymar returned to the starting line-up for the last 16 after suffering an ankle injury in the opening 2-0 victory over Serbia, while the return of Danilo at left-back was almost significant.

Tite has lost another full-back, Alex Telles, for the rest of the tournament but another, Alex Sandro, is training again and hopes to be back. If that is the case then Danilo will switch over to right back and Eder Militao should drop out of the side.

Tite hit back at criticism of his players' dancing goal celebrations in the win over South Korea, dismissing suggestions they showed a lack of respect.

The celebrations divided opinion outside Brazil and the dancing by Neymar and his teammates has been one of the main talking points going into Friday's quarterfinal clash with Croatia in Doha.

"This is not my national team. It is the Brazilian national team for which I have responsibility as coach," Tite said when asked about the celebrations at a press conference on Thursday. "I am sorry for people who don't know the history and culture of Brazil and our way of being."

The 61-year-old, who is at his second World Cup as Brazil coach and is set to step down at the end of the tournament, hinted that he was not comfortable joining in the dancing but admitted he wanted to have a connection with his players.

"I am 61 and these players could almost be my grandsons but I have a connection with them," he said. "If I have to dance, I will dance, although I will do so subtly and I asked them to hide me. It is not my way."

The pressure on Brazil's new generation of stars is enormous as they look to win the World Cup for a record-extending sixth time, two decades after the Selecao last lifted the trophy in Japan in 2002.

The question now is whether they can continue to play with the joy they displayed against South Korea as the tournament in Qatar reaches the business end, but Tite said it was all about the personality of his players.

"It is the identity of Brazilian soccer and of the generation that has emerged," said the veteran coach, who won the Club World Cup in charge of Corinthians a decade ago. We give them the confidence so they can go out and produce their best. These are the characteristics of our players, but beyond that pressure, you need courage to play this way."