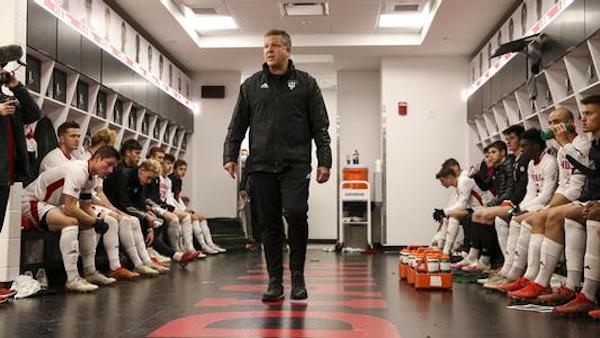 Only two seeded teams remain in the NCAA men’s  2022 Division I playoffs, which crescendo this weekend at the College Cup in Cary, North Carolina, with semifinals on Friday followed by the championship game on Monday evening.

Of the final four teams, only Indiana has previously lifted the national title. The Hoosiers have been to the College Cup 22 times and won it all on eight of those occasions. Creighton, Pittsburgh and Syracuse combine for 10 total College Cup appearances.

It’s not often that a team goes from .500 one year to a two-loss, College Cup-appearance season the next. But that’s what Coach Ian McIntyre has done with Syracuse, which, like Creighton and Pittsburgh, has a chance to capture its first-ever national title.

In front for the Orange are Canadian Levonte Johnson (10 goals, six assists), a semifinalist for the 2022 MAC Hermann Trophy, and strike partner Nathan Opoku, the Ghanian who has a team-leading six assists. The duo’s chemistry is a big reason why Syracuse became one of the most dangerous attacking teams in college soccer.

Three seniors, Abdi Salim (who moved to Buffalo in 2003 from a Kenyan refugee camp), Canadian Christian Curti and Swede Buster Sjoberg, anchor the Orange’s defense, which has the best shutout percentage of the final four teams.

Creighton began to raise eyebrows when it upset No. 2 Washington 3-1 in the second round of the NCAA tournament. At the time, Washington was No. 1 in the United Soccer Coaches poll and undefeated on the season.

Junior Duncan McGuire's opening goal in Creighton’s 3-2 win over No. 7  Duke on Saturday was his 22nd on the year, extending the Nebraska product's lead as the nation's top goal scorer and tying Ray Nikodem (1980) for most goals by a Bluejay in a single season.

Creighton’s 63 goals this season are the most out of any Division 1 program by seven goals (Quinnipiac is second with 56).

At the helm of the Bluejays is Johnny Torres, who played for Creighton in the 1990s. He was the 1996 Soccer America Player of the Year in his junior season after leading his team to its first College Cup appearance in program history. Torres, in his fifth season in charge, has led a Creighton team to its first College Cup since 2012 and its second tournament run in his tenure.

Like Pitt, Creighton has 14 international players on its roster.

Pittsburgh's route to the final four included a overtime 1-0 win against Portland with a gamewinner that came from a French connection.

“I blanked out,” said Valentin Noel, the goalscorer, after the game. “It all happened so quickly. Bertin [Jacquesson] was providing great service all game, and I know that I needed to be right there.”

Pitt’s rise in prominence in the men’s game has been relatively recent: Its first tournament appearance since 1965 came in 2019, and the following three seasons it reached at least the quarterfinals of the NCAA tournament.

What’s helped Pitt — and this is more and more common in the men’s game — is its aggressive recruitment of international players. Fourteen players on its 27-man 2022 roster grew up outside of the USA, including a core of five Brazilians and five frenchmen.

Coach Jay Vidovich, in his sixth year in charge, played at Indiana for one year in 1978 before transferring to Ohio Wesleyan. He coached Wake Forest in 1994-2014.

Indiana has not conceded a goal in its three 2022 NCAA tournament games.

Standing in the way of its 17th final appearance is Pitt, which the Hoosiers beat 1-0 in the 2020 College Cup semifinal. A victory on Friday would make IU the first men's Division 1 program to win 100 NCAA tournament games.

Leading Indiana’s offense is Ryan Wittenbrink, a redshirt and red-headed senior from Libertyville, Illinois, with nine goals and nine assists.

Indiana’s coach, Todd Yeagley, played at IU under his father Jerry in 1991-1994, where it made it to the College Cup in his freshman and senior years. Jerry Yeagley coached the Hoosiers for 30 years, in 1973-2003, and developed the program into one of NCAA’s most successful and consistent.

Todd spent six years in MLS with the Columbus Crew in 1996-2002 and then became the Hoosiers assistant coach in 2003-2008 before taking on the head coaching job in 2010 after a year at Wisconsin. In 2012, he guided the Hoosiers to their eighth national title.

Indiana only has one international player on its 33-man roster.