Officiating at the 2022 World Cup, VAR, time-keeping and diversity 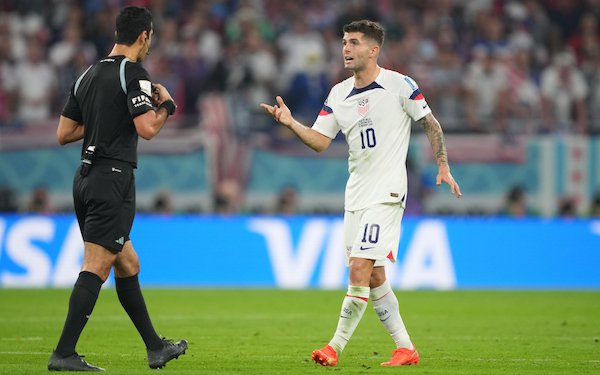 Before discussing the other aspects of officiating at the group stage, let us update some numbers after the first knockout round (eight games).

There were 15 yellow cards and no red cards in this phase and the overall refereeing was very good with very few questionable if any controversial decisions. With addition of the new cards, the yellow card per game average fell from 3.41 to 3.20 and red card per game went down from 0.042 to 0.035.

This supports my conjecture that with a high percentage of correct decisions, good body language – by the way, there is no one single body language that fits all referees – and with communication skills a referee can control the game with minimal cards. The round of 16 games were officiated in a very high level of competency.

The VAR crew for this World Cup is far more diverse than the crew in 2018. This diverse crew has less accumulated VAR experience than the crew of 2018, but the results and data of the group stage show a better performance than 2018.

Before looking into the performance of VAR officials and their implications on the field, I must talk about the general concept of the VAR system. The VAR is only for clear and obvious mistakes with the understanding of minimal interference and maximal benefit. It is clear that the game benefits immensely from the objective decisions supported by VAR and/or semiautomatic systems.

For example, in the first 48 games the new semi/automated offside position detection system worked without a glitch except for the opening game.  Detecting offside position is an objective decision. The widely argued Japanese goal against Germany was ruled to be in the field of play by millimeters. This was also an objective supported by various angles available to the VAR by the system.

One fact is clear: FIFA wants to empower the referee as the final decision-maker in subjective calls. Let us look at two examples:

• Mexican referee Cesar Arturo Ramos in the game between Denmark and Tunisia was called for an on-field ruling for a potential handling offense in the Tunisian penalty area at 90+3 by VAR Fernando Guerrero (Mexico). Ramos after viewing the incident decided to call a foul against an attacking player, which was missed in the buildup, showing that the final decision is with the referee. Ramos was rewarded with a second game (Belgium vs Morocco) and a knockout stage game (Portugal vs Switzerland)

• Iranian referee Alireza Faghani — who I personally consider to be one of the best referees in the world and thought to be a candidate for the final – in the game between Portugal and Uruguay was invited for a potential handling offense by Uruguay in their own penalty area toward the end of the game (90+3) for an on-field ruling by the VAR (Abdullah Al Mar), who is from the host nation, Qatar. After the on-field ruling, Feghani awarded the penalty kick, which did not follow the current interpretation of handball. Feghani did not overrule the recommendation of the VAR and followed the incorrect advice. Feghani did not receive another assignment and very recently in the social media said that he was going home.

One of the metrics of successful VAR implementation is the number of on-field rulings in a tournament. In the 48 games of the group stage, there were 13 on-field rulings. This is 0.27 per game, which is better than the golden standard of one in every three games. At least four of the on-field rulings were unnecessary interventions by the VAR and one of those was overturned by the referee as explained above.  In the 2018 World Cup, there were 21 on-field ruling reviews across 64 games, with an average of 0.33, that is one on-field ruling in every three games. It seems, as time progresses, the VARs are getting used to the system. Even though the VARs this year were more diverse than 2018, hence less experienced, the results based on data show that the mantra of the VAR system is being observed.

Personally, I believe that the golden rule should be not to put every incident under the microscope for a potential on-field ruling using all the camera angles trying to find out evidence for a potential penalty kick or a red card. If it is a clear and obvious infringement and the referee misses it, then it will be clear in a few seconds and with only a few camera angles.

• Areas that improved compared to the last World Cup

One of the directives of FIFA for this World Cup was to add all the time lost in the games with the objective of increasing the time when the ball is in play. This resulted in time added far more than World Cup 2018 in nearly every game.

Since I could not access to real playing time in every game, I cannot conclude what the net effect of this directive was. What we know is that 563 minutes were added on in the 48 group stage games. That is about 11 minutes and 45 seconds added time per game. The average effective playing time in the 2018 World Cup in Russia was between 52 and 58 minutes. It is clearly that this directive is a move in the right direction. Hopefully, at the end of the World Cup, we will know the average playing time.

My guess is that one of the 10 officials (five on the field and five in the VAR room) assigned to the game was instructed to keep a record of the time lost in each half and report it to the referee. We do not know which of stoppages other than injuries, substitutions, silent checks and on-field rulings were included in this time management.

The only problem with a timekeeper might be how to manage the dying seconds. Anthony Taylor in the game between South Korea and Ghana did not allow South Korea to take a final corner kick, which resulted in ugly scenes after the game with a red card issued to Paulo Bento, Korea's head coach. Although Taylor was correct in the letter of the LOTG, unwritten rule and the soccer expect a more graceful and smart ending. Maybe IFAB – with the potential addition of a timekeeper - can delegate the timekeeping of the last 30 seconds to the referee on the field.

The basic area to be developed is the disparity of refereeing quality and standards in the confederations. All four announced quarterfinal assignments went to the UEFA (Europe) and Conmebol (South American) referees.  FIFA could only identify two VAR officials from CAF (Africa) – both from Morocco. At the higher levels of the World Cup, we rarely see a referee crew from AFC (Asia) or CAF.

In the history of World Cup final, only one CAF referee, Said Belqola (Morocco), had the honor of officiating, at the 1998 World Cup. All other finals were officiated by referees from UEFA, Conmebol and Concacaf.  This disparity must be solved by FIFA by providing more referee development support to AFC, CAF and Oceania.

We will see who will be assigned for semifinals and onward. A total of four referees crews will be assigned for the rest of the World Cup. We will see whether any radical changes will occur in the statistics. One thing is for sure, the referees for those games will be from UEFA, Conmebol and Concacaf. I believe anything else will be merely a political assignment not based on merit.