Argentina survives late night drama in Lusail: 'It's a lot of joy, a lot of relief' 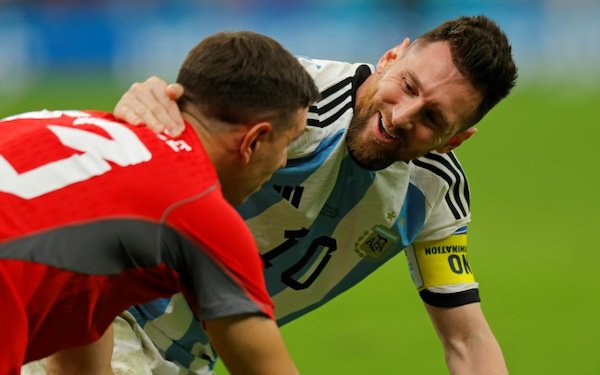 Argentina set up a semifinal showdown with Croatia after beating the Netherlands 4-3 on penalties following a thrilling 2-2 overtime draw in a World Cup quarterfinal classic.

Goalkeeper Emiliano Martinez was the hero in the shootout for the South Americans after Argentina squandered a Lionel Messi-engineered two-goal lead in the final minutes of normal time.

Dutch substitute Wout Weghorst scored two late goals -- the second from an inventive free-kick in the 11th minute of stoppage time -- as the Netherlands fought back with seven minutes of normal time remaining to force overtime.

Argentina looked poised for the last four after Messi conjured up a brilliant assist for Nahuel Molina and a clinical goal from the penalty spot.

"It's a lot of joy, a lot of relief," said Messi. "We didn't want extra-time or penalties. We suffered too much because of how everything happened, but it is the quarterfinals of a World Cup. We knew how to suffer when it was our turn, but we got through to the semifinals.  It's beautiful, something impressive."

For the Dutch it was a bitterly disappointing end to their tournament and they have now lost six of their last eight shootouts in major championships since 1992.

"We have been practicing penalties all year and despite everything we failed. It's a shame," said coach Louis van Gaal.  "As a coach, I want to have everything under control. That's why I asked the players to take penalties for their clubs, they all did. But if you miss two, you won't win. You just can't get over a streak like this."

The Lusail Stadium was turned into home for Argentina with the vast majority of the the 88,235 crowd backing the South American team and only a smattering of orange shirts in the crowd. But all were treated to a thrilling late-night drama that finally reached its conclusion just before 1 a.m. local time on Saturday. 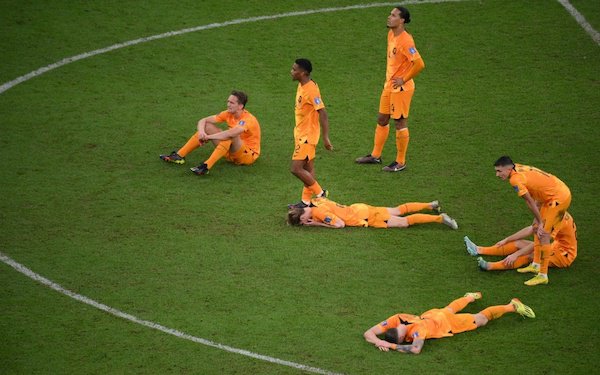 After a cagey start, Messi produced a moment of inspiration, 10 minutes before the interval, to create the opener for his team.
Offering no clues of his intent, he split open the Dutch defense with a sublime reverse pass between Daley Blind and Virgil van Dijk into the path of Molina, who timed his run perfectly and slotted home with the outside of his foot.

Van Gaal responded at the break by making a double change, bringing Teun Koopmeiners and Steven Berghuis on into midfield in place of Bergwijn and Marten De Roon. But while the Dutch saw plenty of the ball their play remained too predictable and guileless.

Deservedly, the Argentines extended their lead in the 73rd minute after Denzel Dumfries tripped Marcos Acuna in the box and Messi made no mistake from the spot, burying the ball in the corner.

The Dutch, though, were not about to go out with a whimper -- pulling a goal back, seven minutes from the end, with an angled glancing header from Weghorst from a Berghuis cross from deep.

Ten minutes of added time raised Dutch hopes and - tempers with a couple of mass confrontations - and  they moved Van Dijk up front and pumped balls int the box. Deep into added time, one of those high balls, led to a free-kick just outside the area.

Koopmeiners feigned an expected shot before instead, to everyone's surprise, playing a short pass into Weghorst, who twisted past Enzo Fernandez and poked home the equalizer.

The wild celebrations over, the game went into extra-time and curiously became becalmed, only sparking back into life late in the second period. In a frantic final two minutes, Lautaro Martinez forced a diving save out of Noppert and Messi screwed a shot wide and only the post kept out a long-range drive from Fernandez.

After all that, it was penalties.

Martinez saved from Van Dijk and Berghuis to help Argentina into a 2-0 lead.

This time there was no way back for the Dutch as, even despite a miss from Fernandez, Argentina held on to win the shootout and head into the semifinals.

world cup
15 comments about "Argentina survives late night drama in Lusail: 'It's a lot of joy, a lot of relief'".
Read more comments >
Next story loading