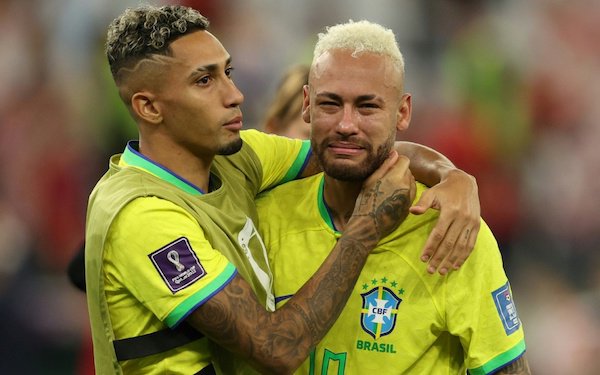 Yet another World Cup has ended in tears for Neymar, with soccer's most expensive player hinting he may not pull on the Brazil shirt again following a painful defeat to Croatia.

The 30-year-old, who gave Brazil the lead during overtime of their quarterfinal match in Doha with a brilliant individual effort, was distraught after Croatia triumphed on penalties.

Speaking to reporters, his voice trembling with emotion, he admitted he could not "100 percent guarantee" he would be seen in the famous yellow shirt again.

That is still younger than many leading names in Qatar, from Lionel Messi and Cristiano Ronaldo to Luka Modric and Olivier Giroud.

But Brazil's brittle number 10 hinted last year that he would not appear at another World Cup, suggesting in one interview that he might not have the mental strength "to put up with even more soccer."

Neymar has carried the hopes of a nation into three World Cups since his emergence as a generational talent at Santos. He has scored eight World Cup goals, but the tournament has exposed his vulnerable physique and fragile emotions.

In 2014, playing on home soil, he was cut down in a quarterfinal win over Colombia and stretchered off in agony with a fractured bone in his back. Without him Brazil capitulated, losing the semi-final 7-1 to Germany.

Four years ago, Brazil's build-up to the tournament in Russia was dominated by his battle to recover from an operation on a broken bone in his foot. He came back in time, but that World Cup was still remembered for his tears in a win over Costa Rica before the Selecao lost in the quarterfinals to Belgium.

This time he appeared to be in peak physical shape as he arrived in Qatar, only to sprain an ankle in Brazil's first game, which forced him out of the next two matches. He returned to score against South Korea in the last 16 and then opened the scoring with a brilliant goal against Croatia, equaling Pele's record tally of 77 for Brazil in the process.

But while Pele won three World Cups, Neymar looks like he will never achieve what "O Rei" (the King) managed, along with other Brazilian greats who lifted the trophy, from Garrincha and Jairzinho to Romario and Ronaldo.

"I am not closing any doors on the national team but I am also not guaranteeing 100 percent that I will return," he said on Friday.
Neymar also missed Brazil's 2019 Copa America triumph due to injury, but his tears have not just come in a Brazil shirt.

He cried after Paris Saint-Germain lost to Bayern Munich in the 2020 Champions League final, and he has shown his distress when suffering the injuries that have regularly interrupted his club career in Paris.

Neymar left Barcelona in 2017 because he wanted to win the Ballon d'Or, but he has still not managed to win that prize and in Paris –- now reunited with Lionel Messi -- he lives in the shadow of Kylian Mbappe.

Even if Neymar decides to play on, with the next Copa America set for 2024, a new cycle will begin for a Brazil team that has gone out of the past five World Cups to European opposition, four times losing in the quarterfinals.

"I don't know what will happen with the Brazil team going forward but now we can only lament what has happened," admitted Neymar.

They will certainly have a new coach, with the 61-year-old Tite stepping down.

Skipper Thiago Silva, aged 38, and the 39-year-old Dani Alves will move on, while young stars such as Vinicius Junior and Rodrygo will be asked to play an ever more important role.

"We are going to have players who have to step up now, as leaders, but we have so many players who can lead the team and set an example," said goalkeeper Alisson Becker, who is eight months younger than Neymar. "We have young talents who are going to improve even more, learn from this World Cup, and we have more experienced players as well who can still contribute to the national team. Now it is difficult to speak about the future because we have so much pain because of the moment, but hopefully the future will be bright for us."