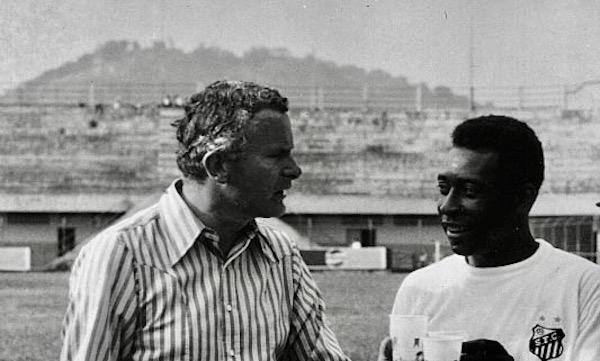 Pele  — maybe the greatest of soccer players — has left us.

It hurts, feels almost personal to me, for it was Pele who became, during the 1958 World Cup, probably the most important influence in the development of my soccer understanding.

Sixty four years ago, on a friend’s primitive back & white television set, I discovered Pele. You understand — I don’t mean no one else knew about him — but this was an intimate personal matter. Just me and Pele — my discovery of a 17-year-old boy who suddenly appeared in my life and changed my thinking.

Not about everything, of course. But about soccer, which was something rather precious to me. I thought I knew a lot about it ... yet here was this little ant-like figure (and his fellow Brazilian ants) performing miracles of athleticism, of trickery, of skill.

I wasn’t leaping up and down or yelling to wake the town — I’m not that sort of a guy — anyway, how could I possibly get emotional just looking at that little screen? Obviously, I had a lot to learn. But you don’t learn how to be thrilled, really thrilled, that’s an emotion that storms into your life and — maybe it really does do this — leaves you short of breath.

Yes, I was thrilled through and through — at the gut level, for sure, but there was another level of thrill there that I couldn’t really explain or even name.

Those tiny Brazilian figures changed my way of evaluating soccer. Up till then I had unthinkingly admired the physical “it’s a man’s game” attitude that suffused the sport in England.

I knew I was watching something rather different. Still very much soccer, but a greatly improved version. So it seemed to me. Much later, when I had shed the macho approach, I was not ashamed to admit that it was artistry that the Brazilians brought to the game.

And the truly incredible thing about my new 1958-vision of the sport was that one of the most obviously gifted of the Brazilian players was this boy of 17. Pele.

It was bad timing on my part — or on Pele’s part, maybe — because I had already made up my mind to leave England the following year — headed for the USA, where there would be no soccer.

In New York, I did manage to follow Pele’s activities by reading the foreign press. I even got to see Pele and his team Santos in a New York exhibition game. And that was as close as I was going to get until 1972 — I was by then trying to make a living as a full-time soccer writer — when I got a phone call from Phil Woosnam, then the Commissioner of the North American Soccer League.

He told me: Pepsi-Cola is sponsoring Pele in the making of a series of instructional films. A “How to Play” series. Filming was about to begin in Brazil, the film crew was already there, but they were suddenly uncertain of their script, would I drop everything and fly down there tomorrow to help adjust the script — I was barely listening by that point simply panting to say Yes to whatever they wanted.

So I spent something like three weeks in Santos, seeing Pele almost every day, working with him in the Santos stadium, listening to him, working on a script that would reflect his thinking, his experience.

This was an extraordinary opportunity to get to know Pele. But that never really happened. When it was over, I found myself wondering if Pele ever allowed himself to get closely friendly with anyone in soccer.

He was never aloof, always a friendly presence, he did everything required of him with a smile. Consider: here was I, a journalist of little repute, repeatedly asking Pele to repeat his bicycle kick as I felt we were not getting the footage we needed. Pele’s adviser, the wonderful Julio Mazzei — “Prof” to everyone — later claimed that I called for over 50 repetitions. Surely not that many — but whatever the total there was never a complaint, not even a sour look from Pele.

The director of the films needed early morning light for the filming — he would have liked Pele to be ready to go at 07:30. Alas, Pele was a notorious late-riser. A compromise was negotiated for 8 am. The first day of that agreement, I felt that I had to be there earlier than Pele. I turned up at the Santos stadium around 07:45 — in time to see the stadium caretaker unlocking the gates to admit the waiting Pele.

As I approached, Pele turned to me and that beautiful smile was never more bewitching, as he admonished me in his quaint but also lovely English — “You see? I am here. Where are the others?” 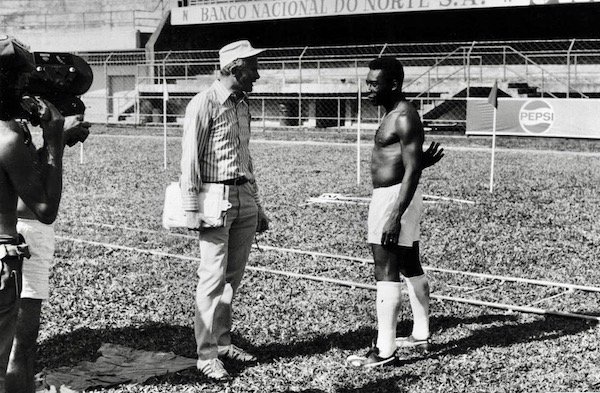 Maybe there was a chance for a closer relationship the afternoon I — and others — were invited to visit his house. Which impressed everyone — my favorite part was a large cage full of gorgeous tiny birds in a multitude of dazzling colors.

But the hoped-for chances of chatting with Pele never came. He was not there, and that was that.

So, while the films were a success, I had totally failed to come up with anything that would allow me to write about “the real Pele.”

Back in New York, a year or two later, I got another of those drop-everything phone calls. Pele was in New York, leaving the following day for a quick visit to St Louis, then the acknowledged youth soccer capital of the USA. Did I want to go along? Ahah! A two-hour flight or whatever it was, spent sitting next to Pele — perfect.

Well, I saw Pele briefly at the airport and was greeted with kindly smile. Pele then headed for his first-class seat while I seated myself a good deal further back in the plane.

Then, in 1975, came the major surprise — the Cosmos GM Clive Toye had convinced Pele to play for the team. So I saw quite a lot of Pele over the next two years. But it was always strictly soccer.

By now I had seen a great deal of Pele as a player — most of it thanks to television. Had I been watching greatest player ever? Oh, quite possibly. Frankly, I wouldn’t know.

There was an opinion abroad throughout the 1960s that soccer’s GOAT was Alfredo Di Stefano, the Argentine who played for Real Madrid. I never saw him live. But the two players are all different in style, different in what they can do. Di Stefano, along with supreme skills, seemed to have inexhaustible lung power.

It wasn’t so easy to sum up Pele like that, for his 20-year career — always played at the very top level — gave us two rather different soccer players. In 1958, we saw the wonder boy, muscular and sturdy, astonishingly mature and full of confidence, speedy in both thought and action, and a born goalscorer.

Nothing frightened Pele, he was never - legally - knocked off his game. It did happen in the 1966 World Cup when the Portuguese managed to so badly kick him that he had to leave the field.

But that sad day, and Pele’s subsequent revelation that he had then thought of calling it a day, were actually a prelude to an astonishing final burst of glory. It was World Cup time again in 1970, and Pele was back in the Brazil team. And what a team — one that won all its games with tremendous style and panache — much of that stemming from the majesty of Pele as not only a physical presence, but also as a commanding soccer intelligence.

He could still score — he opened the scoring in the final against Italy, and late in the game provided a sumptuous assist for Carlos Alberto to thump home Brazil’s fourth.

Did Di Stefano or Messi or Maradona do more, or do better? Who knows? But Pele’s legacy is second to none. These are players from different eras. The most significant similarity among them is that they all came from South America. And they were all superb entertainers.

Even so, I’ll let the Europeans — the French — have the last words on this matter of deciding who gets the GOAT honors: autres temps, autres moeurs.