Compared to the awful first half on Wednesday, the USA began attacking the Football Ferns with a higher tempo, often building from its left side with Crystal Dunn and Trinity Rodman in the opening half hour. There was little the New Zealanders could do but chase American shadows.

The breakthrough came in the 22nd minute when Ashley Hatch scored her fifth career USA goal on a precisely struck through ball from Trinity Rodman, and the Americans didn’t look back. The USA will be back in Auckland for the World Cup, where it opens against Vietnam on July 22. 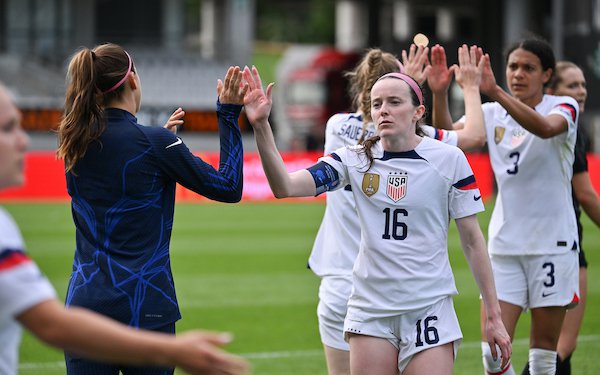 Casey Murphy caught, collected, kicked, and even parried, once, but was otherwise not challenged. She bobbled a cross in the second half and was lucky to get a foul call.

The American backline was hardly forced to make difficult decisions in transition or when New Zealand was in possession, which was not often (USA had 71% of the ball over 90+ minutes). Naomi Girma made an error early on that went unpunished, and Alana Cook’s line-breaking passes didn’t always find their targets, but the center backs generally dealt with the minimal danger they faced with composure and surefootedness. Girma left at halftime for Emily Sonnett. Crystal Dunn was involved in the USA’s attack a lot in the first half. Sofia Huerta played more defensively than Dunn and did not make any glaring mistakes — or big plays, either.

Defensively, the U.S. midfield was sound and dispossessed a depleted New Zealand side often in their own half. Rose Lavelle struggled early on, but she found her legs after the first half hour and did well to score on a valley for the USA’s second; she doubled her tally in the second half and was the only U.S. midfielder who wasn’t subbed out. Andy Sullivan mopped up balls and started attacks for a U.S. attack that generated 11 total shots (four on target). Ashley Sanchez’s speed was on full display a few times throughout the match, and she kept the ball just fine, but couldn’t offer a satisfying end product.

Mallory Swanson was a threat whenever she made a darting run through the Kiwis’ backline, but the service to her from Lavelle and Sullivan weren’t good enough to find her in the first half. The USA’s spells of possession didn’t result in solid opportunities for the forwards for the first 15 minutes, but that changed once the midfield eased itself into the match. Ashley Hatch capitalized on a U.S. counter when Trinity Rodman played a perfectly weighted ball into her feet with only the goalkeeper to beat. In the second half, Hatch should’ve scored her second when Rodman drove into the box and played her through on goal. Swanson’s workrate and build-up play efforts paid off when she found herself open on the penalty kick mark in the 52nd minute and lasered it into the corner, effectively putting the game out of reach.

Taylor Kornieck, the 6-foot-1 midfielder, was left unmarked in the box on the USA’s fourth corner of the night and headed home with ease for her second goal of her U.S. career. Emily Sonnett filled Girma’s center back role without a hitch, ditto Emily Fox for Dunn, often advancing up the left flank to allow Rodman to drift inside.

TRIVIA: The USA leads the overall series with New Zealand, 19-1-1. The lone loss for the Americans came in the first meeting, a 1-0 defeat in 1987.