A statement from Gio Reyna 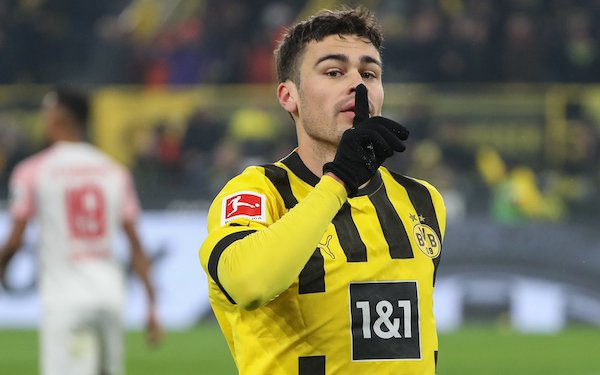 It took all of eight minutes for Gio Reyna to do what he never could do at the World Cup, and that's show why he is one of the mostly highly regarded young players the USA has ever produced.

He came on in the 70th minute of a wild Bundesliga match before 81,365 fans in Dortmund and gave Borussia Dortmund a 4-3 win over Augsburg with a golazo in the 78th minute.

Three times Dortmund went ahead and three times Augsburg tied the score before Reyna put Dortmund ahead for good when he lined up a bouncing ball and volleyed it with a right-footed shot into the top-left corner of the Augsburg goal.

Reyna celebrated by running to the corner kick in front of the famous yellow wall at Signal Iduna Park, putting his finger to his lips as if to ask for quiet and then putting both fingers in his ears to show he is not hearing all the noise around him.

The goal, Reyna's third of the Bundesliga season, came in his first competitive match since the World Cup, where his playing time was limited to eight minutes in the group stage and the second 45 minutes of the 3-1 loss to the Netherlands, and the revelations that followed, putting him and his parents at odds with his coach and their longtime friend, U.S. coach Gregg Berhalter.

Edin Terzic, who had been the interim coach in 2020-21 for Reyna's first full season with Dortmund's first team and returned as head coach this season, had spent much of the fall working with Reyna to build back up his fitness and boost his confidence after a series of serious injuries that kept him out of action much of the 2021-22 season with Dortmund and the USA.

Terzic praised Reyna for how he handled the swirling controversy that made the spat between Berhalter and the Reynas international news, saying "he's coped so much in the last couple of weeks."