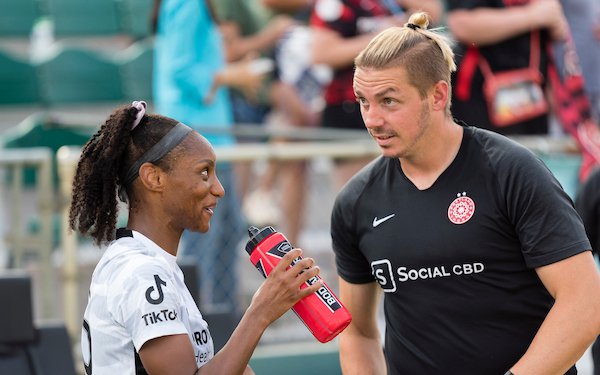 Both were suspended by the NWSL for the 2023 season.

Clough will be eligible for future employment in the league at the commissioner’s discretion provided that she participates in training related to discrimination, harassment and bullying, demonstrates a clear commitment to correcting behavior and acknowledges wrongdoing and accepts personal responsibility for inappropriate conduct -- requirements for future employment in the league

The NWSL will report Soubrier, who hails from France, to the Oregon Board of Athletic Trainers and the Board of Certification.

In addition, the Thorns team doctor, Dr. Breanne Brown, will be subject to increased oversight  by and regular reporting to the NWSL Chief Medical Officer for three months. The NWSL Chief Medical Officer will then provide an assessment to the NWSL commissioner. Dr. Brown will also be required to review the American Medical Association Code of Ethics.

This is the NWSL's statement of the two Portland cases ...

In early November 2022, Portland Thorns leadership reported to the NWSL player concerns about an incident in which assistant coach Sophie Clough made a player feel uncomfortable by kissing her neck at the team’s championship celebration in Washington, D.C. The league engaged a third-party attorney to investigate allegations of this inappropriate and unwanted physical contact with a player. During the investigation claims of bullying behavior by Clough were also raised. Following a thorough investigation, it was found that the claims of unwanted contact were substantiated in violation of league policy. Regarding the claims of bullying behavior, the third-party investigator found that the reports were unsubstantiated and Clough did not exceed the bounds of appropriate coaching.

Additionally, in late November 2022, Dr. Breanne Brown, the Thorns’ team physician, reported concerns to the team’s general manager about player safety following events that took place during the 2022 NWSL playoffs which were, in turn, reported by Portland Thorns leadership to the league. The league engaged a third-party attorney to investigate these allegations.

Dr. Brown reported that Portland’s athletic trainer, Pierre Soubrier, told her he had given two players a medication that contained codeine at the Thorns’ October 22, 2022 semifinal. Codeine is a controlled substance that requires a prescription and should only be administered by a physician. Dr. Brown also self-reported concerns about her own conduct related to the administration of controlled substances. Due to the imminent risk to player health and safety, the league placed Soubrier on paid administrative leave, effective December 7, 2022 pending the outcome of the league’s investigation by a third-party attorney.
The investigator found that the concerns about Soubrier were substantiated. Soubrier was found to have administered the controlled substance to the players on multiple occasions without a prescription and physician supervision which is a violation of federal and state laws and league policy. Further, Soubrier administered the medication to one of the players without her informed consent.
As self-reported by Dr. Brown, the investigator confirmed that on one occasion Dr. Brown provided Soubrier, upon his request, with access to a controlled substance to give to a Thorns’ player if needed. However, Dr. Brown became uncomfortable with this decision and promptly communicated to Soubrier that it should not be administered. The medication was not administered and was retrieved by Dr. Brown. Dr. Brown did not violate any federal or state law or league policy.

• In addition, the NWSL conducted an investigation into the incidents that led to Washington Spirit coach Kris Ward being fired last season.

Like in Cough's situation, Ward's return to work in the NWSL is at the commissioner’s discretion provided that he participates in training related to discrimination, harassment and bullying, demonstrates a clear commitment to correcting behavior and acknowledges wrongdoing and accepts personal responsibility for inappropriate conduct.

This is the NWSL's statement on the Ward case ...


In August 2022, Washington Spirit leadership reported to the NWSL that players had raised concerns about verbal abuse and emotional misconduct during a training session involving former head coach Kris Ward and a player. The league engaged a third-party attorney to investigate. The investigator found that these allegations were substantiated. Ward was found to have engaged in overly aggressive behavior and harassment through negative racial stereotyping towards a player in violation of league policy.