The 15-year-old Timothy is part of Coach John Hackworth’s 20-player squad heading to the 12th Tournament Delle Nazioni, hosted by Italy, Slovenia and Austria April 21-May 2.

George Weah’s 14-year pro career included title wins with Monaco, Paris Saint-Germain, AC Milan and Chelsea. In addition to winning the ’95 Ballon d’Or, he was African Player of the Year in 1989, 1994 and 1995. He kept a home in New York during his playing career and met Timothy’s mother, Clar, when he was opening an account at a New York Chase bank where she worked.

BigAppleSoccer.com’s Michael Lewis reported that Clar was Timothy’s first coach. "She knows the game a lot because she watched my dad," Timothy said.

In 2012, Timothy was selected to U.S. Club Soccer’s id2 program. Later that year, while playing for BW Gottschee, the Rosedale, N.Y., resident made then coach Hugo Perez’s U-14 U.S. boys national and returned to the U-14 squad under coach Tony Lepore in 2013 and under current U.S. U-14 coach Brian Johnson in 2014, by which time Weah had moved to the New York Red Bulls. 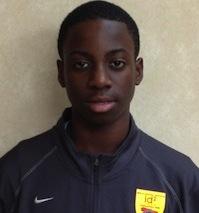 "Wherever we went," Timothy told Lewis in a 2013 interview. "We went to malls and stuff and everyone would be like, 'Oh, that's George Weah.' I would just laugh and say, 'My dad was one of the greatest players and I want to follow in his footsteps.' But I also want to make a name for myself. I want to be Timothy Weah, be myself, play my game and still follow in his footsteps while I'm doing that."

The U.S. U-15s will first train in Italy before playing Group C games in Slovenia against Costa Rica, Slovenia, Costa Rica and Croatia.

Hackworth’s roster is comprised of 17 players that were born in the year 2000 and three born in 1999.

* American Soccer Now’s Brian Sciaretta spoke to U.S. U-20 star Emerson Hyndman, the 19-year-old who has recovered from a broken collarbone suffered in January during the USA’s successful qualification for the 2015 U-20 World Cup and is trying to work his way into the Fulham lineup as it fights against relegation from England’s second tier.

“Obviously I would like to be in with the team but it is a difficult period for the club,” Hyndman said. “In this league, a lot of experience is needed -- especially [considering] where we are in the table. But I think everyone is optimistic that we’ll stay up. But it is definitely different than what we wanted to do at the beginning of the season.”

* Top Drawer Soccer’s Will Parchman spoke to U.S. U-17 striker Haji Wright, who had been part of the L.A. Galaxy’s academy program and trained with Germany’s Schalke 04, about why he opted to join the NASL’s New York Cosmos. …

“I heard about Raul and Marcos [Senna] signing here, and all the legendary history that surrounds this club,” Wright said. “It was a great opportunity for me to come here and learn and develop as a player. … It feels great to play with pros every day and wake up and do the thing I love to do,” Wright said. “I’m going to work hard and try and earn a starting spot.”

* World Cup-bound U.S. midfielder Carli Loyd, who scored both U.S. goals in its 2-1 win over Japan in the 2012 Olympic gold medal game, has joined the coaching staff of New Jersey’s Medford Strikers SC. “I look forward to giving back to the club where I played my youth soccer,” said Lloyd. “I have always wanted to work with young players and having the chance to help out at the club that gave me so much as a youngster is going to be rewarding for me.”