Mallory Pugh: The teen star's amazing rise and how it all started

There were some early signs that Mallory Pugh really, really loved soccer.

When her sister, Brianna, who’s five years older, played for Real Colorado, 7-year-old Mallory would sit on the team bench.

“And she would watch the whole game,” says Real Colorado coach Jared Spires. “At 7 years old, you wouldn’t expect that. And she loved to be around the team. When we won State Cup, we have video of her running around with the team to salute the parents.” 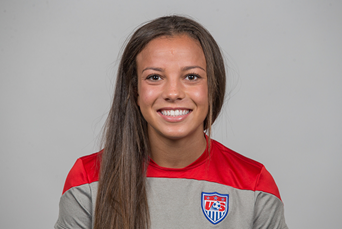 Mallory’s father, Horace, remembers how she would, at age 4, in her room on her 13-inch Hello Kitty TV watch soccer games broadcast by Spanish-language network Telemundo.

Spires, who coached Mallory at U-11 and U-12, says there’s no doubt Pugh displayed extraordinary talent.

“Having done this for so long, you think there’s potential there,” says Spires. “You see special qualities but I don’t think there was any way of envisioning she would do it quite like this.”

Pugh, at age 17, debuted for the U.S. women’s national team in January and scored in a 5-0 win over Ireland.

That Pugh was on a fast track became apparent when she started every game for the USA at the 2014 U-20 World Cup as a 16-year-old. Last December, Pugh scored seven goals in the qualifying tournament for the 2016 U-20 World Cup that the USA won, and was awarded the Golden Boot and Golden Ball. She is also eligible for the 2018 U-20 World Cup.

But breaking into the U.S. full national team in time for the 2016 Olympic Games still seemed a long shot. Because the USA is the winner of the 2015 Women’s World Cup, where the roster allowed for 23 players, while the Olympic squad is limited to 18. But when Coach Jill Ellis gave Pugh a chance she left little doubt that she could strengthen the USA in its quest to win a fourth straight gold medal.

In 10 games (six starts) for Ellis’ team, Pugh has two goals and five assists, which include setting up Tobin Heath’s goal in a 2-0 win in the Olympic qualifying tournament final over Canada and Alex Morgan for the gamwinner in a 1-0 victory over France in the SheBelieves Cup.

“I’m really pleased with where she’s come in this tournament [the SheBelieves Cup in March] because I think it’s not just the mental piece, it’s also the physical dimension of these games that’s brand-new to her at this level,” said Ellis. “She’s handled it masterfully.”

Pugh, however, says it wasn’t easy.

"The transition was a lot tougher than I expected,” says Pugh, a high school senior headed to UCLA. “Just the training load and intensity was so much more than the youth teams. I knew the pace and speed of play would be fast, but you can't really understand how fast it is until you are in training with them.

“Before I went into my first game, I was standing next to Kelley O'Hara on the sideline and she said 'be intense in your defense and good things will happen’ and that was great advice. You have to be intense every day, but there were no challenges fitting in. All the players have been great to me and really helpful."

U.S. U-20 head coach Michelle French said that she finds remarkable how humble Pugh is – “she has a team-first mentality” – and how quick she is with and without the ball.

On her acquiring ball skills and having so much enthusiasm for the game, Pugh constantly credits Brianna, who played college ball at Oregon. 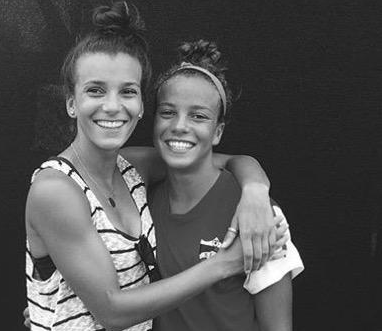 “My parents were always super supportive and helpful and understood everything that I was going through,” says Pugh. “My sister was, of course, my role model.

“The fact that my sister played really made me want to stick with it, keep playing and be the best player I could. When I was 8 or 9, I remember my sister and her friend used to make me do 10 juggles before I could come in and eat and I was always so competitive with myself that I enjoyed the challenge.”

That competitiveness is something that Spires noticed.

“She always had just a great competitive spirit,” she said. “Some people are competitive and they’re angry. But Mallory loved to compete and seemed to love the competition.”

After playing for Spires, Pugh moved on to Neil Payne’s Real Colorado team. When asked about coaches who had a major influence on her at the youth level, she says: "All of my coaches for Real Colorado, Sterling Joseph, who I did personal training with, and Theresa Echtermeyer. ...

"I remember my U-11 coach Jared Spires would always make me perfect my technique on my skills before I could move onto to anything else, and that really helped me refine my relationship with the ball and help me grow as a player."

“Training with the Real Colorado Boys Academy team," she said, “It's a lot of fun. They are very accepting of me and of course the level is high, which is just what I need."

Her favorite players growing up were Ronaldinho, Mia Hamm, Diego Maradona -– and Heath and Carli Lloyd, who are now her teammates.

"I feel really fortunate to have this opportunity to play with my soccer heroes at this age," says Pugh. "I'm just trying to play my role, do the best I can with whatever the coaches ask of me and have as much fun as I can."