How did 17-year-old American Josh Sargent become one of the soccer world’s most exciting young prospects?

He joined the Scott Gallagher Soccer Club at age 8, but before its technical director, Kevin Kalish, cites how the club helped Sargent flourish, he talks about Sargent’s character -- and the soccer culture of St. Louis.

Sargent scored three goals in the USA’s first two U-20 World Cup games, a few weeks after scoring five goals as the USA qualified for the U-17 World Cup.

He became the youngest American to score at a U-20 World Cup when he struck twice in a 3-3 tie with Ecuador and he hit the winner in the USA’s 1-0 win over Senegal.

“He spent a ton of time in front of the goal working on various finishing activities,” says Kalish.

Scott Gallagher SC products include other goalscorers such as Taylor Twellman and Will Bruin, and the current U.S. defender Tim Ream, who stands out for his technical skills. Other alums include: Brad Davis, Pat Noonan, Steve Ralston, Mike Sorber.

“We’re fortunate to be in an area, St. Louis, where there’s a lot a lot of third- and fourth-generation players, so soccer is rooted in the culture,” says  Kalish. “There are a lot of kids who grew up with dads and moms who played, and I think when you have that kind of DNA in a city, you see a lot of parents who make soccer an important part of their kids’ lives.”

St. Louis is one of few parts of the USA where soccer thrived long before it became a mainstream American sport. In one of the most famous upsets in soccer history, the USA’s 1-0 win over England in the 1950 World Cup, five of the starters hailed from St. Louis.

Of course, in Sargent’s case, the soccer influences are much more recent.

“I give credit to the culture his parents created at their home and being born into a family that loves soccer and has two parents who were high level players at the collegiate level -- and the staff that’s been working with him throughout the years creating that environment,” says Kalish.

Liane (nee Deetman) and Jeff both played college ball, Liane at SIU-Edwardsville and Jeff at Sangamon State, now the University of Illinois-Springfield. 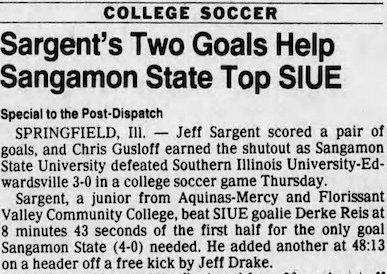 Is Kalish surprised that Sargent is doing so well at such a young age at the U-20 World Cup?

“You never know how a player will do until you throw him in the environment,” Kalish says. “I wouldn’t say surprised. I would say we’re excited that he’s in top form and that he’s seized the moment. We knew Josh’s ability level and now he gets to showcase it at the world stage.”

Sargent’s goal against Senegal: He received a pass from Luca de la Torre. The ball arrived behind Sargent, marked by Senegal captain Jean Ndecky. He settled the ball with his right foot, his back to Ndecky and the goal, and spun 180 degrees to unleash a fierce shot from 13 yards that flew into the right corner.

Like so many of his goals, it demonstrated a true knack for finding a way to put the ball into the net.

“While you do have to have innate abilities to execute like that, he does work on it a ton,” Kalish says. “He’s one of those players even on his own time, when he’s back at home, he spends a lot of time in front of the goal getting a lot of repetitions, finishing from all different angles.”

Scott Gallagher SC is named after the sheet-metal company owned by St. Louisan Jim Scott, who started sponsoring the club in 1976. In 2007, Scott Gallagher merged with St. Louis SC/Busch SC and Metro United.

Kalish himself played for Scott Gallagher, and credits one of its founders, Tom Howe, for emphasizing skillful soccer while training players.

“We’ve been fortunate,” he says. “Tom Howe was an unbelievable leader early on with the organization who trained and coached a lot of the pros you’re seeing today along with a lot of other coaches.

“From day one, we’ve always wanted to be a possession-oriented club that produces technical players, intelligent players, and players who can be flexible enough to play in multiple systems.”

Kalish says that 80 percent of the training at the club is attacking-based.

“We want to create that individual who can dominate,” he says. “We do give our attacking players freedom. The environment we’ve created over years and years is one we hope will result in unique players.”

A superb athlete, Sargent was a starter as a freshman on his high school basketball team before joining the U-17 Residency Program in Bradenton. Before that, Kalish thinks the club did its best to prepare Sargent for the higher levels of soccer. 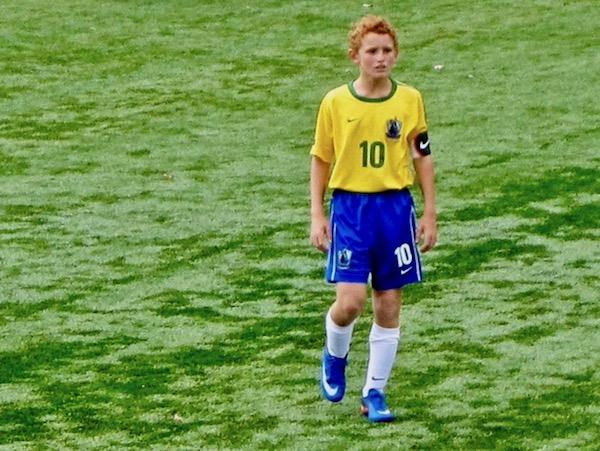 “At 11 or 12, did we think he could go far? 100 percent, yes,” he says. “We always want to build our environment around our better players to give them what they need in order to excel at the highest level, to meet their utmost potential.”

The club challenged him by having him play above his age group.

“We kind of have a hybrid where players train up, play up,” he says. “It’s not a set thing. We’re just looking for an environment to challenge them.”

“In the playoffs, they beat the Galaxy in the first game and then they played FC Dallas the second game,” he says. “FC Dallas won the game but Josh was just a menace the entire game. I felt like every time he touched the ball he was a threat to score. That was a moment for me where I thought he was really going to be unique.”

And, for Kalish, Sargent is a St. Louis kind of player.

“From a mentality perspective, the St. Louis player has an edge to him,” Kalish says. “They can play in a physical match, so to speak, but they can also play in a game that’s very technical and fast-paced. You get a good blend with a St. Louis player. You get very technical, proficient and intelligent players but also with a bit of edge to them as well.”

Sargent’s making a strong case for that claim.