Take care of the mighty hamstring

We’re learning more and more about the importance of the hamstrings in injury prevention and overall athletic performance. Orthopedic surgeons have long been taught that the hamstrings are the “friend” of the ACL. 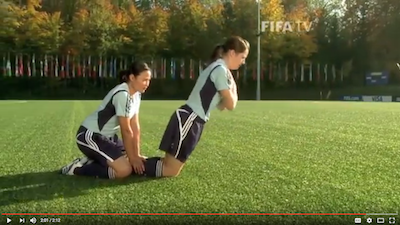 If you should be unlucky enough to injure your hamstring it can result in many weeks out of play and some upper hamstring detachments will require surgery.

Certainly it’s possible those are factors, but we’ve never actually been able to prove that those are significant risk factors for a hamstring injury.

But one thing is definitely known: if you’ve had a prior hamstring injury the risk of getting another one might be as high as 30%. This is one sports injury with a high chance of recurrence.

This is why a number of prevention programs have been designed, which focus on improving hamstring strength and endurance. The nice part about these programs (such as the FIFA 11+) is that they’ve been effective in males and females, multiple age groups, and multiple skill levels. They are best when done regularly as part of the normal pre-training and pre-game warmup, and started during preseason training.

From a performance standpoint a stronger hamstring is directly correlated with faster sprint speed. The hamstrings are definitely your friend when they’re healthy and a pain in the backside when they are injured. Do yourself a favor and take good care of the mighty hamstring.

Key Points:
• The hamstrings are crucially important in overall athletic health.
• Strong hamstrings correlate with lower risk to the ACL, and improved sprint speed.
• A hamstring strengthening program is important to perform as part of your normal strength and warmup routine.

From the FIFA 11+ POSTER

(Dr. Dev K. Mishra, a Clinical Assistant Professor of orthopedic surgery at Stanford University, is the creator of the SidelineSportsDoc.com online injury-recognition course, now a requirement for US Club Soccer coaches and staff members. Mishra writes about injury management at SidelineSportsDoc.com blog, where this article first appeared.