Much has been written in the media about player fatigue, whether it’s professional teams playing three games in eight days or youth squads playing four or five games in a weekend tournament. And rightly so!

But while player fatigue is an obvious issue, what has been overlooked is referee fatigue. Exacerbated by the fact that there’s a referee shortage and we need every game to be covered by an official. So the four to five games that a youth team might play in a weekend tourney often results in an official doing 10 games in that very same tournament. 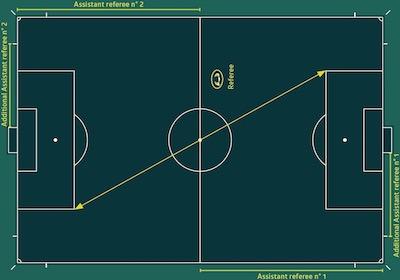 And the last time I checked, refs are older than youth players (sometimes much older, like me!) and they are not substituted during the game, unlike the players. Before the season begins, refs must train to be in game condition.

What I have learned over the years is to listen to my body to be able to adequately cover every game that I’m assigned. I cannot adequately serve as ref for more than three games per day so I limit my availability to ref two to three youth games, and if I’m feeling good that week, I contact the referee association to be an AR for one or two more games to help every match get covered.

It was the day before Easter so only make-up games were scheduled. I was assigned as an AR and all three officials had only one game that day. The man in the middle said that he serves as ref all day Saturday and all day Sunday, reffing eight to 10 games per weekend, and that it’s going well.

But what I saw that game told me a different story as he was too far from play much of the game. For example, when there was a throw-in by the 18 on his diagonal, he was just outside the kickoff circle, 35 yards from the throw-in.

This long-distance calling affected his decisions as the only player cautioned that game was the biggest player on the field. While I’ll admit that player was fouling, he also was getting fouled. Yet the ref often was too far from play so whenever there was contact, he assumed the biggest kid was doing all the fouling.

I spoke to the ref after the game. “Nobody can adequately be the ref for 8-10 games per weekend and if you should be assigned so many, then you’ll have to pace yourself and have similar positioning to what you did today. But it’s our only game of the day and you were too far from play. You need to be within 20 yards of the ball for nearly the entire game to do a good job. If that means accepting fewer games, you should do that.”

Recently, I was officiating the girls U-18 final of a college showcase tournament at Long Island’s Bethpage State Park, which you might have heard of as it hosted a couple of U.S. Open golf tournaments. Midway through the first half, two players on the ball by the touchline stopped playing. I looked to the AR to see if the ball went out of play. No signal from him so play continued. A few seconds later, he belatedly gave the signal for a throw-in so I stopped play.

I told him later, “I know that it’s your last game of the day but you have to battle through your fatigue by concentrating.”

When I notice that I’m starting to become tired, I particularly make a point to concentrate so that I can continue to adequately cover the game.

Traveling becomes an issue too. College soccer is the level that I do that requires the most travel. I receive much of my college schedule months in advance and prefer to have the most travel early in the season when I am fresher.

Because of referee injuries and refs quitting, it becomes more challenging to cover every game as the season wears on since the number of uncovered games needing refs seems to increase every week. All these games take a toll physically and it can be tempting for the ref to take short cuts, such as less stretching and relying on caffeine to be energized for games. And refs need to have days off to recover as well, as my 55-year-old body will most certainly tell you.

As referees, we also cannot emotionally allow the next game to simply become another game and not display the same enthusiasm as we did when the season was just kicking off.

(Randy Vogt, the author of "Preventive Officiating,", has officiated over 9,950 games with his milestone 10,000th game coming up. He has donated $10,000 -- a dollar for every game -- to the U.S. Soccer Foundation and he is asking Soccer Americans to consider making a tax-deductible contribution as well.)