This is a common saying when a parent or fan is approached at a high school or youth sporting event. Often it is a volunteer or a teacher who signed up for supervision duty that confronts an unruly fan, the response is always the same. People think buying a ticket to the event provides the entitlement to say and do whatever they want.

It is the same at youth events, parents pay their portion of a team entry fee, a possible parking fee, and are often stuck at the venue and charged top dollar for over-priced concession food. The consumer believes that yelling, screaming, and berating of officials is their right. This thinking has caused some serious problems over the past three decades and that is starting to put our high school and youth sporting contests in jeopardy.

The WIAA, Wisconsin Interscholastic Athletic Association, the organization that governs high school sports in that state issued a warning letter recently. The letter is a call to parents to curb behavior, an appeal to lay off the officials. There is a shortage in every state across the country and that shortage is now affecting the athletic administrators’ ability to hire officials for contests.

The referee shortage did not start at the high school level. The men and women who referee high school games are seasoned veterans. They have a passion for officiating and they are staying connected to a sport that has meant so much to them. These experienced officials survived their own developmental stages of officiating and overcame the heckling that is causing many young referees to hang up the whistle before they even have a chance to enjoy it.

I have been to 3rd and 4th grade recreational sport contests -- remember this epidemic transcends across every youth sport -- where young referees are screamed at for missing a call. Often, at these contests, the referees are middle school boys and girls helping out their youth club. They are making a few dollars but they are learning how to give back to the programs that are helping them develop.

When I was an athletic administrator, our community had issues with fan behavior, parents screaming at referees and making spectacles of themselves. As an athletic department we attempted many strategies to help curb the behavior. Putting a sportsmanship comment in the event program, making numerous public service announcements, and even listing fan expectations --- did nothing to curb behavior.

Often times at high school boys basketball events, there was a group of older male supporters who would sit in the front row of the bleachers, opposite the team, and harass the officials and make comments to the opposing players. This same group of men had been demonstrating this behavior for two decades. They were supporters of the former coach and become a fixture within the program. Trying to curb that behavior led to complaints to higher up administration and often a directive to the athletic department to “lighten up” a little. Big boosters and the old guard still had some influence and the problem continued. 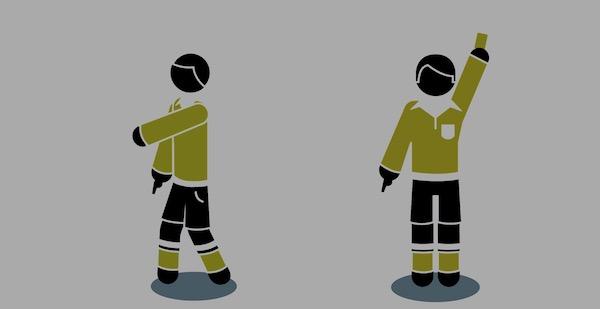 Often, the volunteer or minimally paid supervision staff will try and curb behavior and the disrespect they receive chases them away from filling those positions as well. We tried a yellow/red card at high school basketball games so our supervision staff did not become involved in a “situation.” An unruly fan would be given a yellow card with our school logo on the face side of the card. On the back side would be a behavior warning with the state statute number for disorderly conduct. The card would state that if a red card was handed to them they would need to leave the facility or risk a ticket from our school resource officer.

This process can help your supervision people avoid confrontation, but if all the administrators covering the different events are not fully clued-in and on board, the program can fail. It will also fail when the person who eventually receives a red card is a “friend” of the program.

How do we correct this problem? First and foremost we have to protect our young officials. These young kids, learning the game, are our future referees. We must take an attitude of gratitude when we witness an athletic contest at any level. Instead of running the officials off the field or court after games, thank them for giving up their evening or weekend to officiate your contest.

And most of all, stand up against this behavior. When there is an unruly fan in the crowd, find the supervising staff and get it corrected. If you are confident in your ability to maintain control, have a conversation with the referee abuser and educate them on the problem.

This situation is urgent and reaching epidemic proportions. Let’s keep our kids playing!

(Greg Winkler coaches varsity soccer in Florida. He has 15 years experience as an athletic administrator, and led a large youth organization for over 20 years. He is the author of Coaching a Season of Significance: A Soccer Coaches' Companion to All Challenges of a Year.)