Is it time to replace the penalty kick?

Europe awoke this past Friday morning outraged once more at the latest news from the USA. You know what I'm talking about. The penalty that Baldomero Toledo  awarded for Cincinnati FC after D.C. United's Paul Arriola  was adjudged to have handled the ball seven minutes into the second half of Thursday night's MLS game at Nippert Stadium. 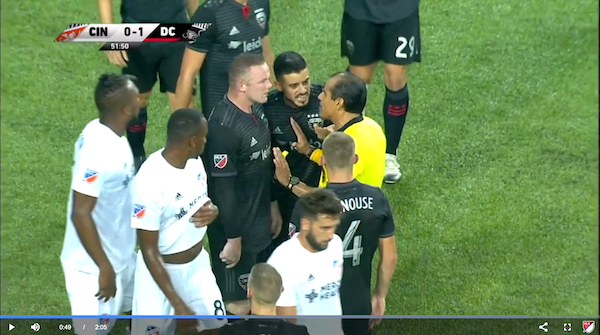 The heated discussions that took place over coffee and croissants in Paris and Vienna centered not just on the award itself, but on Emmanuel Ledesma's stuttered run-up on his way to converting, the encroachment by players from both teams, and the failure of the VAR to intervene at any point during the whole controversy.

In the end, the award was rendered irrelevant by DC's 4-1 victory. You can also argue that the discussions are all part of soccer's fertile landscape. Where would the game be without its talking points? Even though it seems to be FIFA's current dream to eliminate all refereeing errors via off-field robotics. Which, as the Cincinnati-D.C. United game and the entire France 2019 World Cup proved, isn't quite resulting in the perfect game they'd hoped for.

The hullaballoo around Toledo's penalty decision reminded me of an article I wrote some years ago for the print magazine When Saturday Comes. It was part of a series of columns aimed at provoking debate by looking at the game from a new angle. In short, I argued that the penalty kick should be abolished.

In the majority of cases, I maintained, the punishment doesn't fit the crime. Minor fouls or unintentional handballs are punished with an almost certain goal opportunity (and even more so now under the dissembling new handball rule 'clarification'). Replacing the penalty kick with a direct free-kick would benefit everyone on the field.

First, for obvious reasons, the defender, who would not carry the stigma of committing a minor but potentially decisive foul in some far-flung corner of the penalty area. Attackers would also benefit because they would no longer be so tempted to fling themselves to the ground, and also because referees would be more likely to whistle so-called borderline defensive infringements they were previously reluctant to call because of the high stakes.

Which brings us to the referee. "It’s the toughest decision to make for referees," I wrote at the time, "and one for which they will almost inevitably be criticized either way, sometimes to the point of receiving death threats. The result is that ludicrous, game-changing penalty kicks can be given for piffling offenses, or for dives the ref couldn’t be properly positioned to judge [note: this was pre-VAR, but as Werder Bremen will tell you, a dive can still get you knocked out of the German Cup semifinal]. At the same time, many minor fouls in the penalty area go unpunished because the ref is reluctant to give a penalty for, say, pushing or shirt-pulling at a corner kick. Take away the penalty kick, and suddenly those fouls are less critical and can be given."

Finally, the fan. As we saw from the Cincinnati incident, even neutral fans get upset about such calls. "Abolishing penalties might help ratchet down the vituperative tenor of modern soccer," was my take in 2011. "It needn’t mean less drama on the field. More direct free kicks awarded in any point of the penalty area will actually mean more excitement, and a greater test of a striker’s shooting accuracy than merely whacking the ball in from 12 yards against keepers pinned to their line."

I added a couple of qualifiers. For offenses committed in the six-yard box, free kicks would be moved back to the six-yard line. For handballs on or in front of the goal line, a 'penalty' goal would be awarded if, in the referee’s opinion, the ball would have crossed the line. Red card sanctions could broadly stay as they are now. The penalty area would still exist, of course, though it could be renamed the goalkeeper’s area.

I admit that when I wrote the piece, I was not totally convinced of the merits of my own argument. It was intended to start a discussion, which briefly took place in the magazine's letters page the following month (one reader in favor, another asking if the article was a joke). Yet while I'm worried that abolishing the penalty kick might see an overall increase in foul play close to the goalmouth, I still think this is a topic ripe for discussion.

The penalty kick has become too central and too decisive in soccer. With the introduction of VAR, it's also causing massive delays to the flow of the game, while placing undue pressure on referees. I don't see overall what soccer gains from having penalty kicks, while I see a net gain of benefits from its abolition. It's an unjust sanction against foul play that is due a serious rethink.

mls, referees
18 comments about "Is it time to replace the penalty kick?".
Read more comments >
Next story loading