U.S. Soccer has split the Boys Development Academy’s U18/19 league into two divisions for the 2019-20 season that kicks off on Aug. 31. Several clubs that have traditionally been among the USA’s most successful will be playing in the lower division. The DA's MLS clubs are all in the higher division. There will be intra-division play at the newly introduced DA Cup, the showcases, and the national postseason playoffs. 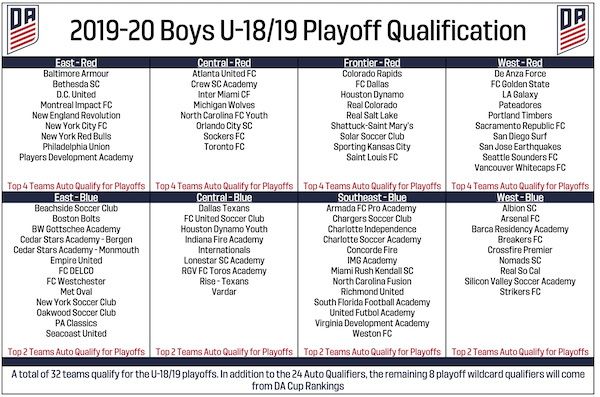 The implementation of the tiered system, which will not yet be applied to U-16/17 and U-15, comes in the wake of MLS clubs complaining that their schedules included too many games that didn't provide challenging competition. Last January, U.S. Soccer’s Chief Sport Development Officer Nico Romeijn confirmed  MLS clubs were considering leaving the DA and that U.S. Soccer was contemplating altering the competition format.

All of the DA’s U-18/19 teams from MLS clubs -- which include 2020 expansion team Inter Miami but not the Chicago Fire, which is no longer fielding a team in the oldest age group -- were placed into the higher “Red” division, which is comprised of 36 teams, 14 of which are non-MLS clubs. The non-MLS-only lower “Blue” division is comprised of 44 teams. Sixteen red division teams and 8 blue division teams will automatically qualify for the 32-team postseason playoffs. They will be joined by the eight highest ranked teams from the new DA Cup, which will merge with showcase competition.

“Our decision about games and schedules has always been about meaningful competition,” said Development Academy Director Jared Micklos. “We took a first step in that last year, and that’s where you saw an unbalanced schedule that was about providing top teams with more games against top teams, and more games between mid-level tier against mid-level tier teams, etc.

“Our goal, whenever we complete a schedule, whether it be the regular season, the new cup competition, or event-related schedules, it’s always about making sure the clubs have the most meaningful games, which is a key component for player development for us.”

The criteria U.S. Soccer used to divide the clubs was: "performance history, player production, market and the ability to provide meaningful games." The new format also introduces different geographic divisions. FC Dallas, for example, will play in the Red Frontier conference while the Dallas Texans will compete in the Blue Central. That's only one example of traditional rivals no longer playing league games against each other in oldest age group.

Washington State's Crossfire Premier finished in first place the last two seasons in the highest age group of the Northwest Division, which included regional rivals Seattle Sounders, Portland Timbers and the Vancouver Whitecaps, and the San Jose Earthquakes. Crossfire Premier has been demoted to the Blue division and now its nearest league games will be 800 miles south, in the San Francisco Bay Area.

"I don't think it would be appropriate for me to comment on a club specifically, because we look at it holistically," said Micklos. "When we look at the data, we're not looking at a single year. It's not using just the past year. It's using data from across the age groups, and across years. And it's also looking at the market and we're constantly evaluating where the top markets are. Just like the academy map, in a remote market, you have one club.

"In the most concentrated markets, in New York or L.A., you have multiple clubs. We're trying to get the right amount of representation. Just like when we decide on an academy club being part of the program in the membership, we do the same thing when we're looking at meaningful games. Because if we have the right number of clubs in the right market, that gives us the best chance to get meaningful games."

After the 2019-20 season, U.S. Soccer will reevaluate the U-18/19 tiers and structure, and may move teams for the 2020-21 season. U.S. Soccer will also consider expanding the two-tier format to other age groups.

A number of club directors contacted for a reaction to the new format indicated that they were blind-sided by the news of their club's demotion, and asked for more time to assess what the impact may be on their clubs before commenting.