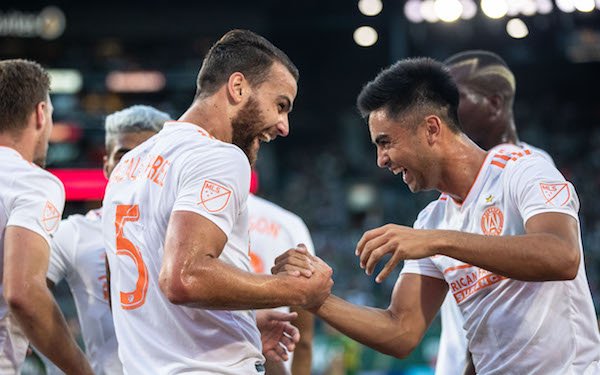 Few expected that defending MLS champion Atlanta United, last in the Eastern Conference as late as the final week of April, would still be in the basement three months later.

But the Five Stripes' climb into first place, which they completed on Sunday night with a 2-0 win at Portland, has been remarkable.

Four days after beating Club America, 3-2, to win the Campeones Cup, Atlanta United dominated the Timbers, getting goals from Leandro Gonzalez Pirez and Josef Martinez to win its seventh game in its last eight matches covering all competitions.

Atlanta United moved ahead of the Philadelphia Union into first place thanks to the first tiebreaker (total wins) and should remain there if it keeps up its current form.

Less than four weeks ago, Atlanta players were complaining at the All-Star Game how they'd been put in shackles by first-year coach Frank de Boer. The rift between Argentine star Pity Martinez and de Boer had been a running story almost since Martinez's arrival from River Plate, which he helped win the 2018 Libertadores Cup.

The Atlanta attack has been playing confidently. Josef Martinez's goal to start the second half marked the 11th straight MLS game he has scored at least one goal, adding to his MLS record. Atlanta United fired off 19 shots against the Timbers and would have scored more goals but for the errant shooting of Ezequiel Barco and Pity Martinez.

"I think we feel fully deserved to win," said de Boer. "Of course, the first half it could also be three for us, but I think the second half we have to really punish them more. We scored a really fantastic goal, the second one, and then we had like three, four opportunities to make it 3-0 and then is the game over."

The reinvigorated attack has benefited from the play of Justin Meram at left wing back since his acquisition from Columbus on May 7. He already has three goals for Atlanta United, more than he had in the last season and a half with Orlando City and Columbus, where he spent his first seven MLS seasons.

A big reason for Atlanta United's success is the stability of its defense, which has allowed just one goal in four games against MLS opponents since the All-Star break. Brad Guzan made five saves against Portland to post his league-leading 12th shutout of the season. Guzan's best save came in the second half when he reached out with his left hand to stop Julio Cascante's bullet header.

“That incredible save keeps you in the game or gives you the victory sometimes," said de Boer, "and from today it was a fantastic performance, I think.”

In his first season as a starter, 22-year-old Miles Robinson has been the most consistent defender. Like Robinson, Darlington Nagbe, once again excellent in central midfield, should get considerable consideration for a call-up for the USA's friendlies against Mexico and Uruguay in September.

Few teams can match Atlanta United in terms of its depth. Florentin Pogba has stepped in at center back for the injured France Escobar, and Jeff Larentowicz, a starter on last season's championship team, started in place of Eric Remedi, who was injured in the Club America match. Tito Villalba (20 goals in his first two seasons) made a late appearance against the Timbers, his first since injuring his knee in May.

"People are coming back," said de Boer, "so we can also rotate sometimes when we need it. It’s nice to see the great atmosphere in the team and the results help with it and we want to keep that, of course.”