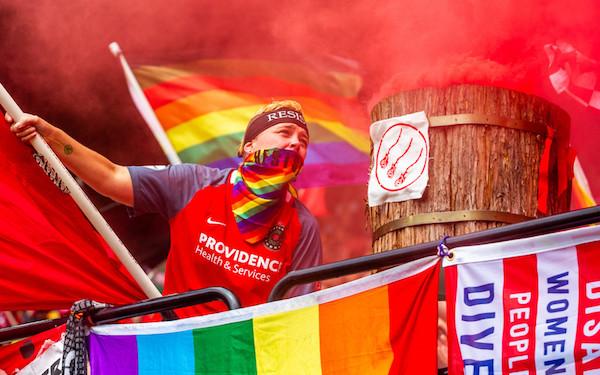 The National Women's Soccer League, which concluded its regular season on Saturday night, averaged 7,386 fans a game, breaking the league record for average attendance in a season.

The average of 7,386 represented a 23 percent increase over the previous high of 6,024 set in 2018. It is the second-highest average in the history of women's pro soccer behind the average of 8,116 set in WUSA's inaugural season in 2001.

Portland became the first women's team to average more than 20,000 fans a game when Saturday's crowd of 24,521 at Providence Park for the Thorns' 0-0 tie with Washington boosted their season average to 20,098 fans a game.

The Thorns, who have led the NWSL in attendance in every season, were aided by the expansion of Providence Park, which added 4,000 seats following an $85 million renovation to the downtown stadium they share with the MLS Timbers. The Thorns' 2019 average is higher than the 2019 average for 15 of the 24 MLS teams.

Seven of the nine NWSL teams -- all but Houston and Orlando -- broke their season record for average attendance, and every team registered double-digit gains year-over-year.

World Cup bump. NWSL teams benefited from the buzz that followed the USA's 2019 Women's World Cup title and the return of the U.S. heroes to their NWSL clubs. Six of the nine teams -- all but Houston, Orlando and Utah -- broke their single-game attendance records in the aftermath of the Women's World Cup.

The biggest beneficiaries were Sky Blue FC and Washington, which saw jumps of 245 percent and 208 percent, respectively, in their average attendance after their world champions returned home.

The jump in attendance in the World Cup year is comparable to 2015 when NWSL average attendance increased almost 22 percent. That marked a turning point in U.S. women's pro soccer as it was the first time a pro league had an increase in average attendance year-over-year. Both WUSA and WPS had decreases in their second and third seasons before their demises.

The NWSL also registered increases in average attendance in 2016 and 2018. It was up almost 19 percent in 2018 thanks to the move to Utah and departure of poor-drawing teams in Kansas City and Boston.

Elsewhere ... The best supported team outside the NWSL is Mexico's Tigres, which averaged 10,810 fans -- 13,107 when you add its three home games in the playoffs -- in the Liga MX Femenil's 2019 Torneo Clausura.

Women's league attendance records are incomplete, but the NWSL is easily the best supported league in the world. Liga MX Femenil averaged 1,825 fans for the 2019 Clausura regular season. Average attendances in 2018-19 for the major European leagues were meager: England (1,010), France (911) and Germany (833).