Why free play is a crucial ingredient for player development

Ted Kroeten is on to something in St. Paul, Minnesota, and you can tell from the smiles on the faces of the hundreds of kids frolicking around the facility run by Kroeten’s organization Joy of the People.

Some of the children are playing a competitive soccer game on an indoor turf field while others have quite a match on an inflatable field with bouncy walls. Older children are intermingled with younger ones,“teaching” them how to play, dominating the games but not in a way that discourages the younger kids from participating. Joy of the People is all about free play, and Kroeten has found that many children, sadly, no longer know how to get a pickup game going.

Kroeten is a highly experienced soccer coach and player, and when he started Joy of the People, he thought he would squeeze in time for free play amongst all the skill training and deliberate practice. Luckily his board of directors forced him to prioritize play. Over the past decade, he has seen his first participants grow into incredibly skillful and creative players, with a group of U19s recently winning the National Championships in futsal.

He has seen players leave his program for more formal clubs and quickly return because they have lost the freedom to improvise and be creative. He has seen children raised in more structured environments come to Joy of the People and, at first, struggle with the lack of rules, discipline, and adult instruction. Over time, though, he has seen the smile return to their faces as they start playing with joy again.

We hear a lot in sports about the importance of deliberate practice: focused improvement through repetitive activity, continual feedback, and correction and the delay of immediate gratification in pursuit of long-term goals. What has gotten lost for so many children, especially with the demise of the neighborhood pickup game and the overscheduling of our children, is simple play. Researcher Jean Cote calls this deliberate play, which he defines as “activities such as backyard soccer or street basketball that are regulated by age-adapted rules and are set up and monitored by the children or adults engaged in the activity. These activities are intrinsically motivating, provide immediate gratification, and are specifically designed to maximize enjoyment.”

Play instills a passion and a love of sport. Play builds all-around athleticism. Perhaps most important, play stimulates brain development. It hastens the growth of the brain centers that regulate emotion and control both attention and behavior. Play inspires thinking and adaptation, promoting creative problem-solving and conflict resolution. It allows children to build their own games, define their own rules, and develop the cognitive skills that are needed, not only for athletics but also for every aspect of life.

In a recent conversation with Kroeten, we got off on a fascinating tangent around creativity and play. Kroeten introduced me to the work of Stephen Krashen and his research on language acquisition. Krashen has found that there are two phases of language learning, acquisition and structure. In the acquisition phase, where learners get a variety of comprehensible input through being immersed in the language or through music and media, the learners gain fluency. Learning is unconscious.

Once structure is added and the learners are taught about rules, laws, skills, and techniques, learning becomes conscious. The learners gain accuracy, but the acquisition basically stops. Kroeten equates this to how players learn a dynamic game such as soccer. During the acquisition phase, we want to provide the least amount of structure as possible so the learner will create, try new things, and play without fear of making a mistake.

Later, when we add structure, we can bring about accuracy. The problem is, we all too often focus on structure and accuracy first and then try to coach the creativity back into them later on. It does not work. “When we teach youth sports in this country, we pretty much focus on the rules, laws, skills, and techniques,” says Kroeten, “and we don’t give any time to the joy and love of play. Only in acquisition can we really improve and become fluent.  What we have seen is that when kids move out of acquisition to a local super club, they seem to plateau. They have not put enough time in acquisition.” 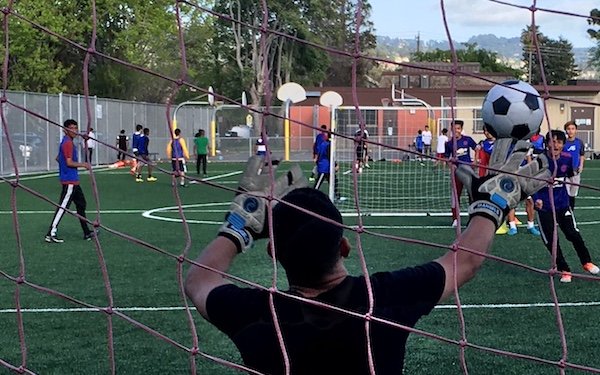 Kroeten is not opposed to coaching and structure but believes we need more time to let the kids play before adding too much structure and accuracy to their games. In his research, most of the best players have had a lengthy acquisition phase before they have added extensive structure. And that is why we need to create an environment where kids can simply play, both within our practices and by being encouraged to pick up a ball outside of practice. “Acquisition builds fluency, and structure builds accuracy,” says Kroeten. “When they are kids, they just want to play,” concludes Kroeten.

“They don’t want reviews. They don’t want rewards. If a competitive game is too much, they will naturally drop down a level to a less competitive place.” As the kids get older, they still want fun, but fun changes. It becomes doing the things that they are good at.Yet what Kroeten has also discovered is that when we introduce free play, it can only have one goal: enjoyment.

“If you try to do free play to improve and get better, it will not work,” says Kroeten. “It can only be for one reason, and that is enjoyment. You have to let go of performance in order to really grow from play, and once you do that, when you go into a performance, you do very well. In that performance you are now playing the game instead of fighting or working the game.”

Our society has devalued play to such an extent that many children no longer value it anymore. This is incredibly sad. I meet many children who struggle to organize a pickup game or select teams, set up a game, and play.

I have tried to run “Free-Play Fridays” at different organizations, and attendance is generally poor. If I run “Skill Development Fridays,” they are packed. We have lost sight of the tremendous value of free play, and we need more situations where coaches provide a safe environment but then step back and let the kids enjoy themselves. We need more organizations to educate their parents on the value of these environments. We need fluency before accuracy, and that comes through free play.

youth
16 comments about "Why free play is a crucial ingredient for player development".
Read more comments >
Next story loading