It happens in every game. The referee goes up to a player, or a group of players, and delivers what looks like a stern lecture. The referee is -- we can assume -- giving the players a warning. They’ve been breaking the rules, and if they persist, they will be called for a foul, and maybe will get a yellow card.

You might point out that referees have been dishing out the same verbal warnings for decades (e.g. at corner kicks), so they don’t appear to be very effective.

You’d be right, of course, but you’d also be wasting your time. Verbal warnings are an accepted part of the game, widely used by referees as the first move in the three-step crescendo of punishments that they can inflict: warning (verbal), caution (yellow card), ejection (red card).

The verbal warning allows the referee to soften his judgment, to administer merely a chat rather than a card. It has its greatest value in youth soccer, where giving a young player a second chance seems more humane than immediately whacking them with the full strength of the rulebook.

Possibly. But verbal warnings at the pro level? Does that make any sense? Not to me it doesn’t. Pro players are supposed -- should be required -- to know the rules of their sport. No second chance for them.

But the truly questionable aspect of the verbal warning is that it is not in the rulebook. I have been scanning FIFA rulebooks for decades, looking for a definition -- even just a mention -- of the verbal warning. I’ve never found one. In fact, I’ve never come across the word “warning.” Caution, yes. That means a yellow card and the occasions when it must be used are elaborately spelled out in Rule 12.

But silence surrounds the verbal warning. It is neither approved nor frowned on. Just ignored. Well, not quite. In the 2018-2019 rule book, lo and behold, the word itself, “warning,” popped up in, of all places, Rule 1 (which deals with The Field of Play).

It was the arrival of VAR that induced the rulemakers to utter the word “warning.” The field of play must now include a “clearly marked” area -- the Referee Review Area, RRA, where the referee can consult a monitor showing replays. Rule 1 now stated that a “team official” who entered the RRA must “be publicly given an official warning.”

That wording didn’t last long. It disappeared from the next (2019-2020) rulebook. But “warning” was gaining ground. It now appeared in Rule 12, under the subhead Team Officials. A warning was now a disciplinary measure issued to team officials (not players) for four defined infractions (e.g. “Failing to co-operate with a match official”).

So a “warning” now has official status in the rulebook. It can be used only in the case of four defined offenses, and can be applied only to team officials, and not to players. The status is confirmed in the current (2020-2021) rulebook.

(And there is, inevitably, an exception, and even more inevitably it’s the goalkeeper, who can be “warned” rather than “cautioned” for committing an offense when defending a penalty kick).

A mess. To put it charitably. The rulebook does, finally, acknowledge the existence of a “warning.” It then severely limits its use: to be used only to penalize four specific offenses committed by team officials. Nowhere do the rules indicate just how this warning must be “publicly given.”

A total mess because in soccer the word “warning” has a much wider -- and much more widely understood -- use as the verbal warning given to players: an almost friendly nudge to let a player know that if he doesn’t clean up his act he’ll be carded.

The rulebook’s refusal to recognize the verbal warning continues, it seems determined to stick with its extremely restricted definition of the word warning.

The thought -- logical enough -- that team officials were being “warned” because they could not be cautioned with a yellow card was quickly squelched by the rulemakers. The 2019-2020 rulebook permitted referees to show yellow and red cards to coaches. But the current 2020-2021 rulebook repeats the narrow definition of warning and its limited use.

So a totally unsatisfactory situation persists. Referees at all levels use a three-step disciplinary approach, where the rulebook, making no allowance whatever for verbal warnings, allows only the two-step caution/ejection path. 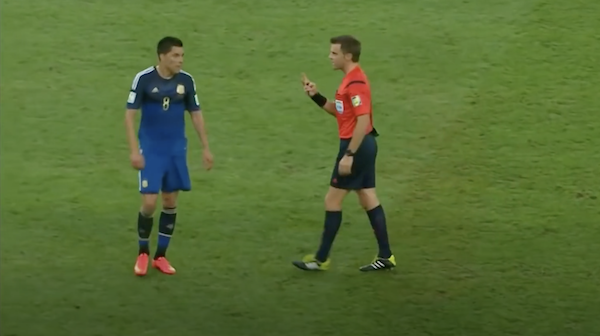 There can be little doubt that many a verbal caution is given to avoid having to give a yellow card -- i.e. as a way of not applying the rules of the game. There may well be good reasons for such flexibility in youth soccer.

It should certainly not be permitted at the pro level. Yet it happens in every game.

What is required from the rulemakers is an open acknowledgment -- a welcome, really -- of the verbal warning, with a clear definition of what it is supposed to accomplish.

Plus the introduction of a clear referee signal. I would suggest the use of a blue or a white card. Once that has been decided, those irritating chats should be a thing of the past. You got a blue card and everyone knows what that means. Next foul, you’re on -- at least -- a yellow. No need for the ref to explain anything.

If a blue card is to be seen as the first phase of a three-step disciplinary chain, that should be stated in the definition. If it is to be part of the player’s disciplinary record, then it must become part of the official game stats and part of each player’s profile (and each referee’s too).

The blue card, I think, should not be used at the pro level. What is needed there is a more stringent approach to the award of yellows and reds. And a ban on chatting referees. I fail to see the value of giving experienced pros a second chance to foul.