Sky Blue FC star forward Imani Dorsey  is 25. The 2018 National Women’s Soccer League Rookie of the Year is only a year younger than Breonna Taylor, the ER technician who was shot and killed by police in her own Louisville, Kentucky, apartment on March 13, 2020.

Ahmaud Arbery, 25, had been killed by the son of an ex-Georgia policeman a month earlier. On May 25, 2020, in Minneapolis, George Floyd died while a cop knelt on his neck.

Against this background of social unrest due to racial inequalities, Dorsey and other players in the NWSL, which was the first league to return to competitive play last year after the pandemic shut down, saw an opportunity to create meaningful change. They formed the Black Women’s Player Collective. 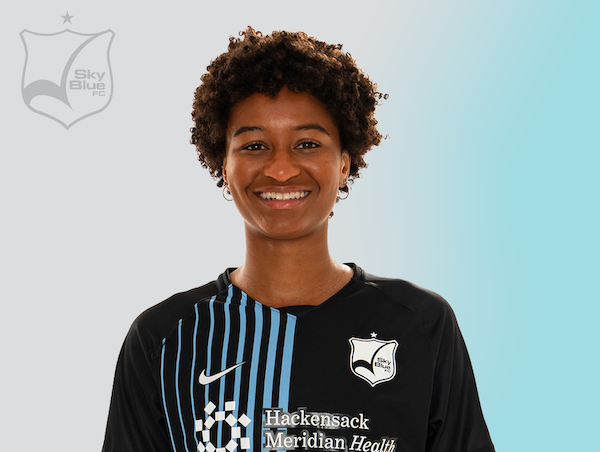 “The BWPC really began during the Challenge Cup last summer, largely due to police brutality, especially the murders -- George Floyd, Ahmaud Arbery and Breonna Taylor,” Dorsey explained. “The protests that we saw, the civil unrest and the social reckoning that the country was having. Corporations were actually vocalizing that black lives matter. All of us were together and seeing all these things happening and having all these conversations together. Black players were constantly talking and checking in on each other. Also, people were asking us how we felt and we thought, ‘Why don’t we speak for ourselves?’ That’s really how it began.”

Dorsey, a graduate of Duke University, is currently on the executive board of the BWPC. The non-profit organization seeks to, as detailed in their public statement, “elevate the image, value, and representation of Black women as athletes and leaders in business, industry, and public and private institutions.” BWPC also “aims to provide a collective voice to the Black perspective and experience of a professional female athlete amid the incessant and pervasive racial inequality and social injustice plaguing our country.”

In October, 2020, Dorsey represented the BWPC at the unveiling of two new soccer mini-fields in Newark, New Jersey. The U.S. Soccer Foundation and Black Players for Change were among the partners involved in the community project, but Dorsey noticed a fact that to her underscored the need for the BWPC: “I was the only female athlete there. There is such an urgent need for women to be involved as role models.” 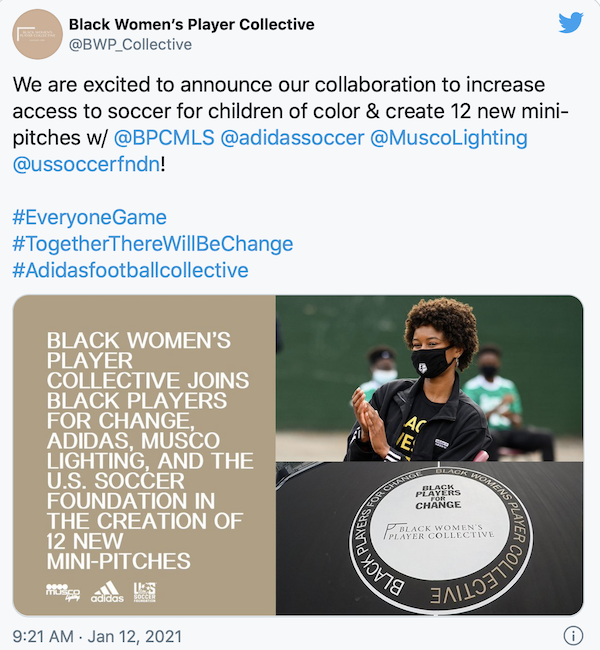 After all, having the right women to look up to and admire was instrumental for Dorsey. “I have been playing soccer since I was 5. We had just moved and I was put into a rec league. I absolutely loved it.”

Though she also participated in taekwondo and track, soccer remained Dorsey’s main passion. She counted herself fortunate to be mentored by Coach Shannon Higgins-Cirovski through middle school and high school.

“She was an incredible player and an even better coach,” reflected Dorsey of Higgens-Cirovski, who won the World Cup as a player in 1991 with the USA. “She taught me so much about the game and being a woman in the game, trying to lead a life I can be proud of and showing my best side to society. She told me from an early age that soccer was something I could do. I could get a scholarship.”

Another key guide during Dorsey’s years at Duke was assistant coach Carla Overbeck, a World Cup winner with the USA in 1999.

“I knew how special it was,” said Dorsey of playing for and learning from former world cham, pionship players. “It’s easy to see representation and think, it’s just a face on the screen and not realize what weight it carries. Just the fact that they’ve walked that path before you. You have a shared experience. It wasn’t inserted into all our conversations, but you connect and you relate and trust more than you would in other circumstances, in terms of dreaming big. Your perspective is broader and your dreams are bigger. These women in front of you have done it and then you think, you too can do it.”

In that vein, Dorsey is determined to be a role model for those who might not otherwise have one.

“I grew up in Central Maryland, which is a predominantly white, suburban area,” she said. “I was used to, in every facet of my life, being the minority, being one of the few, not just in soccer. That was my every day. My club team, I was fortunate to have four, five black teammates. That’s not usual. I had the same thing at Duke as well. So many moments, just the experience of being a black person, is unique. There are often things that someone can only understand if they’re black as well. It’s hard to explain, but you know it because you’ve seen it, you’ve lived it. To have that to share with other girls was so impactful.”

There were no black players on the U.S. squad that won the 1991 Women’s World Cup and only two (Brianna Scurry and Saskia Webber) on the 1999 edition. Three (Christen Press, Sydney Leroux and Shannon Boxx) featured in the 2015 championship squad. Five (Press, Crystal Dunn, Jessica McDonald, Adrianna Franch, and Mallory Pugh) were winners in 2019 and are current World Cup champions.

“I would notice (the lack of minority players) more when getting called into U.S. youth team camps, and I would be one of the few again,” said Dorsey, who first entered the national team program with the U-15s in 2012 and earned her first full national team cap in 2019. “Sometimes there would only be two of us. I realized in college, how special it is to have that connection in a sport that is predominately white in this country. I am thankful to be around these incredible women. We are friends for life. They helped me identify who I am more strongly and advocate for more black players in this country. Hopefully we can have more black players in the sport.”

The NWSL, launched in 2013, is now the longest-running women’s pro soccer league in the U.S. history. With survival has come greater stability. Bumps in the road include disparities between NWSL players and USWNT players paid by the federation on a different salary scale. Certain USWNT players would at times miss numerous games during the NWSL seasons for national team duties, while short-handed club rosters would do their best to soldier on. Some foresee a not-too distant future where the USSF is no longer paying NWSL salaries and the NWSL Players Association represents all the players in the league.

“The league has grown so much in the last few years,” said Dorsey. “We’ve come a long way and we’ve still got a long way to go. Thankfully, the NWSLPA has taken huge strides. Hopefully, it comes to a point where it’s one organized group of NWSL players. It’s moving in the right direction, is what I’ll say. We all understand that as soccer athletes, we’re trying to leave the sport better than we found it. It’s going to take time. There’s some hardships, but we all have the same goal.”

Until 2020, NWSL ownership featured no people of color. Now, however, Naomi Osaka, the multiple Grand Slam champion who showed support for victims of police brutality by wearing their names on face masks before matches, is part ownership of the North Carolina Courage. Serena Williams and Candace Parker are part of a large and diverse ownership group of Angel City FC, soon to join the league in Los Angeles.

Presently, Dorsey is focused on not only the upcoming NWSL season with Sky Blue FC, but also helping the BWPC maintain momentum to effect real change. A documentary series has been filmed and release details are coming, as well as more details on a series of soccer clinics.

“Announcements will be coming!” Dorsey promised. “Our Go Fund Me is a popular thing and thankfully, the link has been distributed widely among NWSL fans. It’s been incredible. I don’t want to give away the other things we have in the works, but we’re very excited to be more involved in the community.”

In certain ways, Dorsey’s work with BWPC plays it forward to a new generation.

“The reason we came together is that as black women, we have a distinct experience in this country,” she said. “Our target to influence is younger black girls. We want to fill that representation gap that we don’t often see shown in a variety of facets in our lives. It was so inspiring to me to see Crystal Dunn and Christen Press on the national team as actual stars.

"It’s important to see that and see it more. How do we get more black women involved? How do we give them more opportunities and show them what they are capable of and what they can achieve? If you don’t know it’s there, how are you going to go about getting to it? We want to create more opportunities for black girls and women in all these soccer communities and help them grow and learn.”